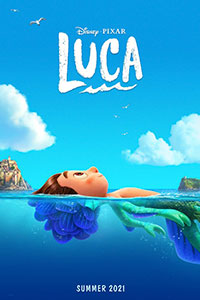 Every new Pixar film reignites a debate among critics and fans. Some say they’ve lost the magic that brought us unforgettable experiences like Finding Nemo (2003) and WALL•E (2008). The sequels, never as good as the originals, inevitably disappoint, while newer offerings such as Onward (2020) lack the same transportive quality of their heyday in the 2000s. But there are masterpieces among their recent work. Coco (2017) is among their very best, last year’s Soul continues to reveal its layers, and I remain in the minority as an unabashed fan of The Good Dinosaur (2015). Moreover, every time I see an animated film from some other studio, especially Disney and DreamWorks, I’m reminded of everything Pixar does right and other studios do wrong. Their latest, Luca, is no exception. The story—about two young sea monsters in 1950s Italy who leave their home to go incognito in human form on dry land—might seem like standard stuff: a dash of The Little Mermaid here, a sprinkle of Ponyo there. But the Pixar touch isn’t about purely original storytelling; it’s about giving familiar settings and characters a unique treatment.

All of this is to say that Luca is not the latest Pixar masterpiece, but it is very entertaining, gorgeously animated, and imbued with rich themes. Luca, voiced by Jacob Tremblay and looking like a cross between a lizard and your standard merperson, lives under the surface in the ocean’s equivalent of a sheep farm. By day, he wrangles the family’s baaing fish; by night, he imagines elaborate adventures on the surface. When his overprotective parents (Maya Rudolph, Jim Gaffigan) plan to stifle his dreams of going to the dangerous topside, Luca swims away and finds Alberto (Jack Dylan Grazer), another merboy his age. With his collection of human gadgets and gizmos aplenty, Alberto teaches Luca all about surface life, including what happens when sea monsters leave the water: they (almost) instantly turn into humans. After some Bambi-level awkwardness during his first steps, Luca resolves he never wants to return home. He and Alberto concoct an elaborate plan to find a Vespa at the nearby human town of Portorossa and, together, explore the world on two wheels.

Inspired by the likes of Federico Fellini and Vittorio De Sica (there’s even a La Strada poster spied on a wall, situating the events after 1954), this literal fish-out-of-water tale veers in another direction. Once the merboys arrive in the small fishing village, they discover its inhabitants have a paranoid fear of sea monsters. Soon enough, they team up with the rambunctious Giulia (Emma Berman), a young girl with a towering father, Massimo (Marco Barricelli), a one-armed fisherman who cooks pasta that will make your mouth water. Giulia teaches the boys about money, and how enough of it could buy them a Vespa. Fortunately, a local triathlon of swimming, pasta eating, and biking approaches, and our boys set out to win the prize money. But every time a raindrop or splash of water touches Luca or Alberto, it threatens to reveal their fishy secret. 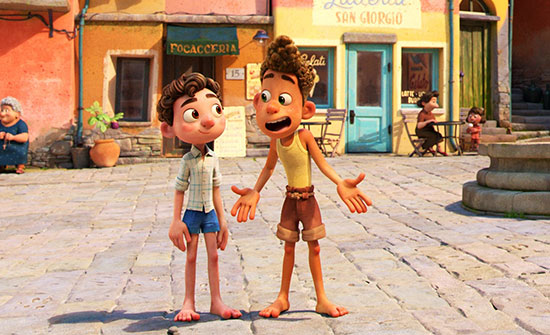 Drenched in low sun and stunning warm colors, Luca is often beautiful. However, the character designs—both people and merpeople—look rather plain, recalling the simple human character in The Good Dinosaur. But the animation excels in other scenes. For instance, several dream and daydream sequences find Luca and sometimes Alberto drifting off into boyhood fantasies about landscapes brimming with Vespas and flying fish in the stars. Luca has a vivid imagination, and the filmmakers break the film world’s comparatively bland boundaries to explore it. Less imaginative is the studio’s recent trend of wily animal antics, as seen with the cat in Soul and the raccoon in Incredibles 2 (2018). There’s a recurring joke about Massimo’s chubby cat looking suspiciously at the fish boys, suspecting they’re not what they appear to be. It’s a funny aside but hardly essential to the narrative.

The film might seem like a trifle until a series of conflicts threaten the central friendship. Giulia bonds with Luca over his newfound love of books, and Alberto gets jealous in an ugly scene, declaring, “I’m his friend. I know what he needs—Me!” As we learn, Alberto’s father abandoned him. He clings to Luca as a replacement, his only friend, “forever,” they declare. Elsewhere, Ercole (Saverio Raimondo), a teenage bully with a few hairs on his lip, targets the newly formed trio of friends. Luca and Alberto narrowly avoid being found out by Ercole on several occasions until, inevitably, he spots one of them. The mounting jealousy and tension culminate in a betrayal that made me audibly gasp. Everything after that moment unfolds with a tenderness I didn’t think the film was capable of—shame on me for underestimating Pixar.

What becomes increasingly implied, but never stated, is that Luca and Alberto are coming out to the Portorosso villagers. Their reveal to the world presents a queer subtext. It’s certainly there—arguably unmissable—for anyone willing to look, but it’s not part of the text. Instead, writers Jesse Andrews and Mike Jones use all the subtlety of a Classic Hollywood screenplay designed to fool the Production Code, only they’re fooling Pixar’s overlords at Disney. Luca is director Enrico Casarosa’s first feature after spending well over a decade on Pixar’s creative team (previously, his 2011 short film “La Luna” earned an Oscar nomination). The film is based on Casarosa’s childhood experiences in Genoa, Italy, and seeks to capture the youthful play between boys. Audiences may read it differently, though. Casarosa has remarked in press interviews that Luca is not intended as a gay story and takes place in a preadolescent period before boys start thinking about their sexuality. And while that may be true, one cannot be blamed for hoping Luca and Alberto kiss in their big moment at a train station finale. But, alas, it’s not in the cards for them, not onscreen anyway.

Read on surfaces alone, Luca presents a familiar coming-of-age fable about friendship, albeit impeccably animated and confidently told. It’s lower-tier Pixar, with the understanding that the studio’s worst films are still better than another studio’s best. But it excels when considered as an exploration of queer sexuality emerging during adolescence, even if that’s not what Casarosa intended. The film could help youngsters who may not feel comfortable with their feelings just yet achieve the bravery to declare themselves with pride publicly. One suspects that while, on the whole, Luca may be considered a mediocre Pixar effort, the film might also be considered one of their best among queer viewers. There’s a tender message running through the film about Luca finding the people who will accept him for who he is. It’s a message that has real value, whether you’re a merperson, part of the LGBTQ+ community, or someone looking to find your people.