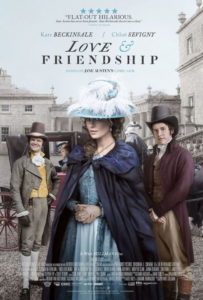 Whit Stillman has made a small but significant career writing and directing comedies of manners, intermittent though they may be. Almost as scarcely productive as Terrence Malick, Stillman’s mere four films in over twenty years began with Metropolitan in 1990. The Harvard-educated Stillman’s body of work often follows privileged twentysomethings—from the Upper East Side Manhattanites in his debut to the preppy cousins in his follow-up Barcelona (1994), and then to the affected group of friends in The Last Days of Disco (1998). That accounts for each entry in Stillman’s self-described “Doomed Bourgeois in Love” trilogy, where the social dynamics amid a microcosm of privileged friends take center stage. After his fourth film, Damsels in Distress from 2011, went virtually unnoticed, the filmmaker’s dry humor and subtle but cutting dialogue finds a perfect showcase in Love & Friendship, creating an unlikely association between himself and the source material’s author, Jane Austen.

Although the uninformed viewer might enter Stillman’s film with the belief that he’s adapted Austen’s epistolary novella Love and Friendship from 1790, in fact he’s borrowed the title alone and based its contents on another such Austen novella, Lady Susan. Written around 1794, Lady Susan was first published posthumously in 1871 and remains unlike any other of her published works. Austen never intended to publish the story, but it remains a fine historical example of how she was still developing her skills as a writer, which formally debuted with Sense and Sensibility in 1811. The novella lacks the prose that lovingly appears in her novels by structuring the story around a series of letters from one character to another. Stillman jettisons that approach for a somewhat traditional narrative adaptation, preserving what must be the most sharply observed and unsentimental of all Austen’s heroines: the manipulative Lady Susan Vernon, a charmingly underhanded conniver who seems capable of anything. Though it may sound salacious, the material rings with the alertness and comic wit that define both Stillman and Austen’s most charmed works.

A not-really-grieving widow, Lady Susan, played with great elegance and acidity to spare by Kate Beckinsale, sets out to arrange husbands and security for herself and her daughter, Frederica (Morfydd Clark). While maintaining relations with the decidedly handsome Lord Manwaring (Lochlann O’Mearain), who’s married to the perpetually-in-tears Lucy (Jenn Murray), the virtually penniless Lady Susan survives by staying with family. Among them, she stays with her siblings-in-law, Catherine DeCourcy Vernon and her husband Charles (Emma Greenwell and Justin Edwards), where she sets her sights on Catherine’s brother Reginald (Xavier Samuel). Both attractive and able to carry on a conversation, Lady Susan is nonetheless much older than Reginald; and what’s more, his parents (James Fleet and Jemma Redgrave) do not approve of the match, knowing Lady Susan’s propensity for opportunistic schemes. A more suitable choice for Reginald is Federica; however, much to Federica’s dismay, she’s also being courted by Sir James Martin (Tom Bennett, riotous), a silly man described as “a bit of a rattle”—accurately demonstrated when he tries to remember each of the “Twelve Commandments”. 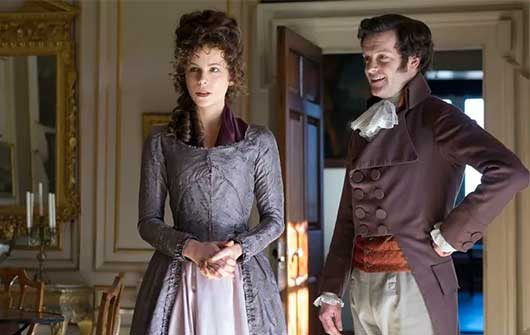 Many of the ins and outs of Lady Susan’s plan, complete with momentary deceits and a long con, are unforeseeable. She’s an expert liar, using her position and status to her every advantage. Her motivations remain secret to the viewer, though her plans are occasionally shared in advance with her best friend, Alicia Johnson (Chloë Sevigny), an American married to a temperamental British husband (Stephen Fry). Mr. Johnson puts Alicia on warning, first to keep Lady Susan out of their house, and then all contact must be cut. Though Lady Susan appears as nothing but courteous and gracious—humble even; certainly never the orchestrator of such a complicated ruse—a few individuals just beneath her level of intelligence have recognized her coolly practiced machinations of love and status. Beckinsale, smiling a viper’s grin throughout, brings devious charisma to this most sophisticated of roles. She’s quite good when she’s not headlining in genre drivel, and makes the most of Austen’s dialogue (“Facts are horrid things”), which Stillman has preserved well.

Even while embracing Austen, Stillman brings a Lubitsch touch to the proceedings, largely through brief stylistic choices that set Love & Friendship apart from other, more traditional Austen adaptations. During the first twenty minutes of the film, Stillman introduces characters by name, framed in portrait view within an oblong frame, and surrounded by a dimmed iris like a silent film. They stand, sometimes regal, sometimes weeping, sometimes oblivious, looking into the distance or directly into the camera, depending on the nature of their character. There’s a wry kind of humor behind a choice like this, just as there is driving Stillman’s choice to display humorous, hand-written text from letters on the screen—a particularly funny instance of which features a husband transcribing a letter for his wife, reading aloud the punctuation, and then choosing to paraphrase instead. Overall, Stillman’s approach recalls moments in Lubitsch’s The Oyster Princess (1918), where the satire is mannerist.

Austen’s tale might be called post-modern today, given its feminist anti-hero at the center, and her almost sociopathic manipulation of people to achieve what she wants. The first contemporary comparison that came to mind was, strangely enough, Rosamund Pike’s Amy Dunne from Gone Girl—a genius-level schemer who always gets what she wants (of course, there’s no murderous undercurrents here). But describing the ironically-titled Love & Friendship as post-modern would be somewhat inaccurate. According to scholars, Austen (1775-1817) lived her youth in the late eighteenth century during a period in Great Britain’s history in which manners were far more open and casual, whereas the nineteenth century welcomed the social rigidity and decorum for which Austen’s work is more often associated. Consider how, if there’s an age difference at all in Austen’s texts, it is usually the male suitor of a much younger female; here, if Lady Susan is best suited for any kind of match, it’s a younger man. And while other Austen protagonists usually end up with their novel-long love interest because the fates have miraculously aligned in their favor, Lady Susan does the aligning, and her aspirations lie more explicitly in continuing her sordid alliances with a certain financial freedom.

An admirably duplicitous anti-hero in a brave, side-splitting story of its time, Lady Susan remains a fascinating character interested in neither love nor friendship. And while it may take less time to read Austen’s 70-page novella than it does to enjoy Stillman’s 93-minute adaptation, the film proves superior by losing the epistolary format. Not to mention its showcase of the usual British costume drama trappings: Eimer Ni Mhaoldomhnaigh’s gorgeous costumes and Anna Rackard’s impressive interiors are captured under overcast U.K. lighting by lenser Richard van Oosterhout, all to stunning effect. Following Stillman’s poised guidance behind the camera, Love & Friendship feels more lively and rambunctious than other costume dramas of Austen ilk, though the author’s themes of women requiring marriage for status, security, and love remain intact. Because the latter characteristic does not apply to Lady Susan, the material takes more risks in its narrative and sense of humor, which in turn Stillman savors for the screen, much to our delight.