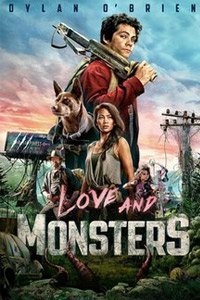 Love and Monsters checks a few of my “I’m a sucker for” movie boxes. For instance, I’m a sucker for boy-and-his-dog stories. Movies that follow the friendship between a person and canine play my heart like a piano; the relationship can even be between a girl and a superpig (as in Okja)—the age, gender, and species are less important than the unspoken bond between human and animal. Though, the outcome is often unbearably schmaltzy. I’m also a sucker for a good coming-of-age love story; combine that with a dog, and you’ve got a winner (see How to Train Your Dragon). As a genre aficionado, I often gravitate toward post-apocalyptic scenarios, and Hollywood has accommodated those tastes in recent years ad nauseam with a plethora of options. And maybe it’s my enduring love of classic Universal monsters, but any movie with a memorable monster is bound to earn some added affection from this critic. With that, Love and Monsters is something of a sure thing; it checks all of these boxes, as though the filmmakers engineered the product for someone of my particular tastes.

Of course, a cynic might look at Love and Monsters and accuse the movie of combining several popular elements into one commercially viable hunk of Hollywood filmmaking. The original spec script by Brian Duffield (Underwater) and co-written by Matthew Robinson (The Invention of Lying) draws upon several tropes and mixes them into a pleasant-if-familiar mash-up. But those same boxes I praised in the paragraph above might’ve been selected from a hat at random, and the script could have written itself. Here’s the elevator pitch: A coming-of-age boy-and-his-dog love story set in a post-apocalyptic world overrun by enormous monsters. The script has a by-the-numbers quality, as though Duffield and Robinson followed every rule in a “How to Write a Successful Screenplay” manual. And yet, no matter how familiar the structure and subject matter may be, the treatment makes the material come alive in inspired ways. Other writers could have just as easily checked those same boxes and made a bad movie. But while Love and Monsters is a blend of bankable traits, it’s also a triumph of production design, Oscar-nominated special FX, creative creatures, genial humor, and a charismatic lead performance by Dylan O’Brien. And let’s not forget the dog, named “Boy.”

O’Brien plays Joel, one of the 5% who survived after humanity launched an arsenal at an asteroid approaching Earth only to have chemicals reign down and mutate several animal species into giant, man-eating monsters that wiped out almost everyone. Seven years later, the last remnants of humanity now inhabit underground bunkers and keep in contact via radio. Although others in his colony go out for supplies, Joel remains inside, crippled by fear of some enormous termite thing biting off his head. But Joel’s sense of bravery gets a jump-start when, some 90 miles away, Aimee (Jessica Henwick), his high-school sweetheart—his only sweetheart ever, it seems—sounds in distress. Naive and inexperienced, Joel nonetheless arms himself and sets out on the dangerous surface to save Aimee. And almost immediately, a toad the size of a tank nestled in a former swimming pool comes close to turning Joel into lunch. Luckily, he’s rescued by Boy, played by an Australian Kelpie named Hero, and the two remain together on the journey across an overgrown landscape riddled with CGI beasties. 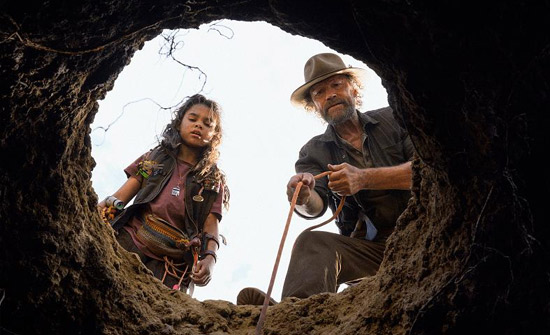 It must be said that the bond between Joel and Boy—or O’Brien and Hero, if you prefer—is among the most natural and delightful of all boy-and-his-dog relationships captured on screen. O’Brien has always been an energetic screen presence, and those familiar with his career thus far may experience déjà vu watching Love and Monsters. He already appeared in a post-apocalyptic YA trilogy, The Maze Runner, which has the same flavor, albeit underwhelming. Then again, he rarely appears in material worthy of his charm. Alongside Hero’s expressive personality full of head tilts, tail-wagging, and licking affection, O’Brien elevates what might’ve been a somewhat overfamiliar twentysomething male character. Joel narrates the story from passages in his journal (colored pencils on the page, 2D animations in the opening credits), which is addressed to Aimee and doubles both as a guide to the monsters he’s seen and his inner monologue. Meanwhile, most of the movie’s dialogue consists of the one-way conversation between Joel and Boy, which is relatable for most dog lovers.

Love and Monsters comes alive during the surface journey, especially after Joel and Boy meet two other survivors, the tough Clyde (Michael Rooker) and his 8-year-old companion Minnow (Ariana Greenblatt, bound to be a star). In a few brief scenes oozing with personality, the movie establishes two supporting players whose presence is missed when they’re gone. They teach Joel how to shoot his crossbow and distinguish the deadly monsters from the kind ones—though most of the “Chumblers” and “Sandgobblers” want him for lunch. Queensland, Australia, doubles for the post-apocalypse, where South African director Michael Matthews shoots the location’s lush forests and rolling green hills as though Nature has reclaimed the planet. The sublime setting is also home to enormous creatures—the most memorable being the nightmarish blend of the creatures from Jaws (1975) and Tremors (1990). Though made for a paltry $30 million, the movie’s scenery and splendid CGI deliver a convincing world, brightly colored and imaginative, and filled with monsters that look like the products of a budget quadruple its size. From a terrifying millipede to a climactic crab, not one monster looks or feels generic—they’re the products of artists who seemingly grew up inspired by Atomic-Era science fiction.

Best of all, Love and Monsters avoids falling into the trap of becoming another fantasy about a young male traveling across the monster-laden world to get laid; however, the trajectory and humor of Zombieland (2009) are a clear influence here. Rather, the “love” aspect of the title may feel somewhat underserved by the script. The treatment of Joel and Aimee’s eventual reunion isn’t as wish-fulfilling as one might expect. But the narrative becomes one about self-actualization, more about Joel’s relationship with Boy than the consummation of his interrupted teen romance. The implication remains that Joel and Aimee will end up together someday. Unfortunately, Paramount released Love and Monsters in October 2020, in the midst of the COVID-19 pandemic, meaning it could hardly make a sizeable profit and ensure the sequel promised by the final scenes. Even so, it’s an entertaining movie, the sort that delivers fun, excitement, romance, and heart in generous portions. Zombieland received a belated sequel ten years later thanks to its devoted following; hopefully, Love and Monsters will too.