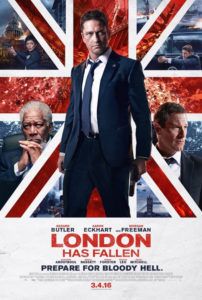 After the assassination of several world leaders in London, Gerard Butler’s Secret Service hero Mike Banning must once more protect American President Benjamin Asher, played by Aaron Eckhart, from his would-be killers. At one point, Banning catches one of many anonymously Middle Eastern terrorists and tortures the man. Then, just before he kills his captive, Banning delivers one of his exceptionally stupid one-liners: “Why don’t you go back to Fuck-head-i-stan, or wherever it is you’re from!” That just about sums up the level of intelligence found in London Has Fallen, the unnecessary follow-up to Millennium Films’ unexpected hit, Olympus Has Fallen. That was the first of two movies from 2013 about a White House assault; the second was Rolland Emmerich’s White House Down, but neither was very good. Olympus Has Fallen‘s $161 million box-office draw earned it this obligatory and lackluster sequel.

Even with the lowered expectations established by Antoine Fuqua’s original, the sequel, directed by Swedish filmmaker Babak Najafi, manages to underwhelm. A screenwriting foursome (Creighton Rothenberger, Katrin Benedikt, Christian Gudegast, and Chad St. John) has reestablished all the familiar elements, many of them customary since the days of Stallone and Schwarzenegger actioners in the 1980s. In a pre-credit sequence, Pakistani arms dealer Aamir Barkawi (Alon Moni Aboutboul) is seemingly blown to smithereens by a drone strike at his daughter’s wedding. Years later, Barkawi orchestrates citywide hysteria in London for revenge, and his elaborately staged Master Plan leaves most of the Western World’s leaders dead.

But not Asher, thanks in large part to his tough bodyguard, Manning, who drives the President through a gauntlet of gunfire to escape. Olympus Has Fallen was an obvious Die Hard rip-off, being a claustrophobic actioner with walkie-talkies and bloodshed galore. The sequel takes the proceedings around a metropolis, so you could argue it has much in common with Die Hard with a Vengeance. To be sure, Banning protects his Commander in Chief on the streets of London with ruthless patriotism. As he beats one terrorist to death, the hero predicts an absurdly long future for America: “Assholes like you have been trying to kill us for a long time,” he snarls, “but in a thousand years we’ll still be here.” At the same time, the Vice President (Morgan Freeman) sits at a War Room table with other officials, played by Melissa Leo and Jackie Earl Haley, saying things like “My God!” at images of London’s destroyed landmarks. Viewers can’t help but chuckle at the images themselves, since they’ve been rendered with cheap CGI. Whenever buildings explode or a helicopter crashes, London Has Fallen manages to look like a video game.

Late in the movie, someone points out there are more than one hundred terrorists holed-up in a building. “They should have brought more men,” quips Manning as he cocks his gun. The jocularity of London Has Fallen remains astounding throughout. And yet, the filmmakers don’t engage in such absurdity with a self-aware sense of humor. They’re presenting Butler as an action hero with a straight face, expecting the audience to delight in his old school macho bullshit. Oh, and he’s homophobic too. There’s a sequence where Asher hides in an arms closet while Banning takes care of a half-dozen terrorists outside. Just before one of them gets the jump on Banning, Asher emerges and shoots the terrorist dead. “I always knew you’d come out of the closet,” says Banning, while the audience groans at his awful wisecracks.

Nevertheless, there’s an established audience for material like London Has Fallen. Brainless action movies have a special place in many a moviegoer’s heart. A few select viewers in my screening, mostly older men, cheered as Banning killed countless goons with ease, and they laughed at each of his moronic one-liners. Between its jingoism, its masculine exceptionalism, and its utter disregard for collateral damage in the hundreds, this mean-spirited movie plays to the lowest common denominator. Surely, audiences who want to see the bullets spray and assess get kicked won’t find its choppy editing, complete lack of political commentary, or haphazard technical presentation troublesome. For some, the mass destruction and massive body count is enough to satisfy. The rest of us should know better and avoid the silliness of it all.