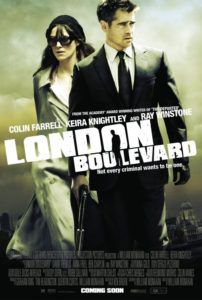 Writer of Martin Scorsese’s gangster drama The Departed and Martin Campbell’s hard boiled revenge pic Edge of Darkness, William Monahan makes his directorial debut adapting Irish crime writer Ken Bruen’s novel London Boulevard, a mean streets tale with a dash of 1960s British crime movie panache. Accompanied by a rich soundtrack featuring Bob Dylan, Dominic Murphy, The Yardbirds, Kasabian, and of course The Rolling Stones, Monahan’s film occupies a familiar style and storyline, doing so with raw gangster dialogue and a handful of strong performances. But Monahan doesn’t yet have a confident enough hand to lend the production much stylistic finesse from behind the camera; and although actors make up for lacking style, they cannot salvage the film’s structural problems.

An intense Colin Farrell occupies the modern day equivalent of Michael Caine’s persona from Get Carter and The Italian Job, playing Mitchell, an ex-con just released from a three-year stint and looking to reform his criminal ways. As a welcome back, his sleazy former associate Billy (Ben Chaplin) sets him up in a flat “owned” by ruthless crimelord Gant (Ray Winstone, coolly menacing as ever). From Gant’s perspective, this means Mitchell owes him a favor, but just to seal the deal he kills someone in front of Mitchell to make him an accomplice. Mitchell isn’t intimidated, telling Gant in a roaring nose-to-nose that he wants nothing to do with that life anymore. Nevertheless, Mitchell hits up his old contacts (including Danny Dyer) for information about two hoods (Jamie Blackley and Gregory Foreman) who killed his homeless pal Joe (Alan Williams), as he intends to give them a dirt nap. By tossing Gant’s offer back in his face, Mitchell must also worry more than he already does about his unhinged sister, Briony (Anna Friel), a manic party girl and likely target should Gant seek reprisal.

Meanwhile, Mitchell is recommended for a legit job as the handyman for reclusive superstar actress Charlotte (Keira Knightley). He never formally accepts, but comes around Char’s Holland Park manor anyway because she, and her bohemian confidant Jordan (David Thewlis), trust him. A romance blossoms because it must, although it’s an underdeveloped affair where love is declared long before sparks fly onscreen. Strong are Mitchell’s blazing confrontations with Gant, as Winstone’s absolute authority finds a worthy opponent in Farrell, who delivers a performance very similar to his comeback turn in Martin McDonagh’s In Bruges. Knightley’s role aches of truth given her stardom in England and abroad, hounded as paparazzi linger about her character’s home waiting to snap a shot, one of them a clear allusion to Mark David Chapman. But her character is hypocritical, complaining that actresses are little more than dressing for their leading men even as she doesn’t bother trying to transcend that definition within the movie. Thewlis is wonderful as the shady friend who spends his days getting high, but doesn’t mind pushing a nosy cop (Eddie Marsan) down the stairs if needed.

Elements of Roeg’s Performance echo through the film’s juxtaposition of criminal and celebrity lifestyles, but the real inspiration here is Sunset Boulevard, as suggested by the title. But unlike William Holden, Farrell isn’t consumed by the madness of the film’s resident celebrity, nor does Monahan’s script offer post-mortem narration—however, narration may have brought the story’s many, many varied strains into a cohesive whole. Instead, the film borrows a cue from De Palma’s Carlito’s Way by returning to one of the film’s many subplots just when we’ve forgotten it. That moment comes as a shock, but fails to achieve the kind of gravity Monahan was no doubt hoping for, and which De Palma achieved, again, with glue-like narration.

Next for director Monahan: an adaptation of Jean Anouilh’s play Becket, which, as a period piece, aligns nicely with the writer’s script for Ridley Scott’s Kingdom of Heaven. Here’s hoping Monahan retains a consistent style in his future directorial projects; one of London Boulevard’s resounding downfalls is how he shifts from noirish crime story one moment to romantic fodder the next. Chris Menges’ clean lensing adapts to both approaches nicely, but without much showiness to his technique. A little flash is just what this film could have used. Fortunately, Monahan knows how to cast his film. He brings over Winstone from The Departed and snatches up Farrell, who’s blossomed into a real actor now that his playboy days have calmed—not to mention Knightley, Chaplin, and Thewlis. Even still, Monahan delivers a messy-if-mildly-enjoyable crime movie that should entertain, but won’t wow, fans of both the genre and these performers.