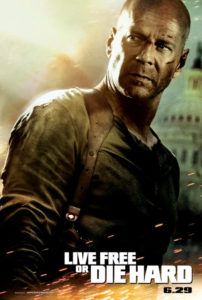 Sequels generally follow the “bigger is better” rule. In a blockbuster franchise, any amazing special effects or stunts from previous films become a minimum standard for filmmakers to outperform. With an action franchise, this process often results in more pyrotechnics since its predecessor(s) probably already developed the central characters, which are summarily overshadowed by the glorious yet meaningless explosions. Such was the case with Die Hard 2: Die Harder. The fourth film in Twentieth Century Fox’s Die Hard franchise, Live Free or Die Hard, could be accused of similar crimes, except it’s so damn entertaining. Even though the usual Die Hard-specific action and attitude have been muted by the production’s unfortunate PG-13 rating, even though NYPD Det. John McClane doesn’t always feel like the McClane we know and love, director Len Wiseman does such a wonderful job orchestrating bravado shootouts, fights, and chases that our most basic entertainment needs are met.

Like its two immediate predecessors, this fourth film was based on a script not originally intended for Die Hard use. WW3.com was originally penned by Enemy of the State screenwriter David Marconi, based on an article in Wired about what would happen if hackers shut down our global network. But where Simon Says became With a Vengeance by successfully incorporating the franchise’s temperament into foreign material, this rewritten screenplay by Mark Bomback, unfortunately, lacks an understanding of John McClane. Not that it needs to follow a terrorist plot-turned-heist to subscribe to what we think of as standard Die Hard material, but Bomback doesn’t incorporate those McClane touches that make this series what it is. Underworld helmer Wiseman lends his action scenes energy, but his players need inspiration. Though, not even John McTiernan, director of first and third entries, could have saved this film from not feeling connected to its predecessors—not without a rewrite reestablishing McClane’s more potent character traits.

Bruce Willis returns, almost twenty years after originating his most iconic role as detective John McClane, the role that made him a star. Characterized by his wise-cracking, cynical, vulnerable human nature, Willis’ McClane has changed little throughout four movies, which is why his character remains dependable, and why, for the most part, this franchise has succeeded creatively. But something’s missing here. Usually in the wrong place at the wrong time, here McClane curiously finds himself on the job, protecting computer hacker Matt Ferrell (played by Apple spokesman Justin Long) from a group of cyber-terrorists. Long provides nerdy-but-humorous commentary throughout, leaving Willis’ performance rather stale in comparison to the earlier Die Hard films. McClane’s New York accent is all but gone. His penchant for F-bombs has disappeared. There’s no smoking or drinking, no motherfuckers or shitheads. Hell, McClane is even missing his hair. 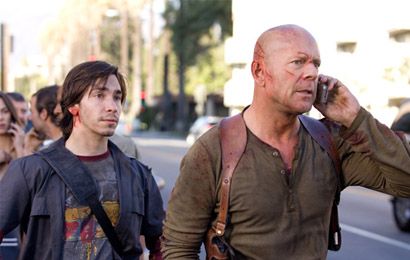 The scenario finds cyber-terrorists executing hackers all over the U.S. to prevent anyone computer-savvy enough from stopping their leader’s master plan: a firesale—meaning all utilities, financial records, energy sources, and personal information will be corrupted or erased, sending America back to the Stone Age. This time, the terrorists are fronted by disgruntled former U.S. computer-defense agent Thomas Gabriel (a smoldering Timothy Olyphant). He may not have the sophistication or style of Hans Gruber or his brother Simon (Alan Rickman and Jeremy Irons in the first and third films, respectively). Still, there’s an inferno behind Olyphant’s eyes. His character desperately tries to maintain control; meanwhile, McClane spoils well-laid plans, revealing Olyphant’s nervous/infuriated/scared/livid intensity. He delivers lines with a creepy calm, rarely raising his voice and never losing his menacing tone. Of course, McClane throws down his usual jokes, but in fewer doses than previous Die Hard entries. Cold and calculating all, the villain makes it personal when he kidnaps McClane’s daughter Lucy (Mary Elizabeth Winstead) to use her as a bargaining chip with McClane.

All three previous films in this franchise were rated R. This one took a safer rating for commercial reasons. Fox, wanting to maintain name-brand recognition and introduce John McClane to a younger audience, set out to make a PG-13 rated sequel. Fans balked at this announcement, and Willis gave his best performance yet during promotional campaigns where he argued the lightened rating wouldn’t change our enjoyment of the film. To be sure, despite the absence of blood, the action doesn’t falter; what we miss are McClane’s potty-mouthed antics. And while one can certainly understand Fox’s desire to expose a younger demographic to the franchise, chances are they would have snuck into R-rated screenings anyway (or been brought along by their parents who still fondly remember the original). The best result possible result: a few extra tickets sold. Meanwhile, die-hard Die Hard fans are left questioning why a franchise would choose to drown out its signature one-liner—“Yippee-ki-yay, motherfucker”—with a gunshot.

Given McClane’s traditional foul-mouthed taunting of terrorists via walkie-talkie or telephone, when he finds his daughter has been kidnapped by Gabriel’s gang and not one “fuck” or derivation thereof is uttered, we realize something has changed in McClane. Whatever caused that change is unexplained in the script. Maybe he found religion. Maybe he’s out of change for the swear jar. Whatever the reason, Willis downplays McClane’s energy. Perhaps it can be explained by McClane’s old age or perhaps by Willis’. Sadly, even with an unrated DVD reincorporating any cut F-words, Live Free or Die Hard would still lack the same McClane-isms as the original and With a Vengeance. 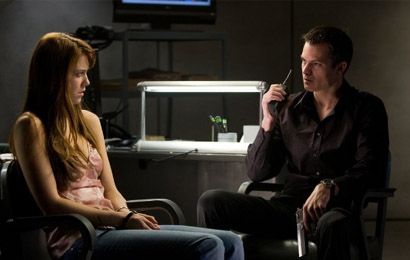 Furthermore, the film’s lacking claustrophobic scheme isn’t with what we know as Die Hard-esque; but if you think about it, none since the first in this series have really embraced the man-alone-against-terrorists-in-confined-space plotline. Die Hard 2 gave McClane an entire airport from which he could walk away at any time. With a Vengeance gave McClane all of New York City to search for Simon’s ticking time bomb. Live Free or Die Hard has McClane traveling all around the East coast, and this expansive terrain is never fully outlined. Claustrophobia only appears as a concept, such as it did in With a Vengeance—except here, it’s more abstract. There’s no digital timer to heighten our suspense. McClane is limited not by a physical infrastructure such as Nakatomi Plaza or by the limited time and lack of transportation in With a Vengeance, but by the lack of technology resulting from the firesale. Unable to use cell phones and exposed by cameras connected to computers, McClane has nowhere to hide from Gabriel’s cyber thugs.

Coherent music might have helped this sequel retain the consistency of the first and third films. Die Hard offered Michael Kamen’s version of “Ode to Joy” throughout; With a Vengeance sustained the Civil War tune “When Johnny Comes Marching Home”—each grants their particular film a musical pulse. Instead, the music here is as inconsequential as Die Hard 2, which is surprising, since Live Free or Die Hard’s trailer boasted an electric guitar version of ”Ode to Joy,” recalling both the first Die Hard and Hendrix’s version of “The Star-Spangled Banner” (how I wish that would have been this film’s musical piece throughout). The only constant is Wiseman’s ability to keep the action quotient high and his usual muted-color visual palette.

Right about now, it may sound like I didn’t really care for Live Free or Die Hard, but admittedly, I was entertained. It provides some of the best summer-movie escapism of 2007—a year filled with many disappointments ranging from Spider-Man 3 to the third Pirates of the Caribbean movie. This is another disappointment, to be sure, but only in a mild sense that didn’t prevent me from enjoying the humor throughout and massive action scenes, which involve all sorts of airborne vehicles and colossal explosions and impressive fisticuffs. The undeniable affability of Willis, even in his hushed performance as McClane, doesn’t hurt either. The fact is, if you change McClane’s name to Bob Johnson and omit the one or two McClane-specific references, you have a solid action movie with amazing special effects and a timely post-9/11 story, just nowhere near the characterization of a Die Hard movie.