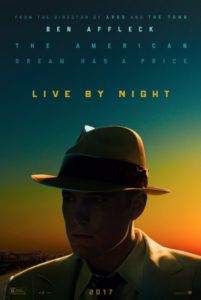 Ben Affleck made his directorial debut in 2007 with Gone Baby Gone, an astounding adaptation of author Dennis Lehane’s best-selling novel about Boston private detectives. Between then and now, Affleck made two more films in the director’s chair. His bank heist thriller The Town (2010) once again ventured into his hometown of Boston and borrowed more than a few notes from Michael Mann’s Heat. Affleck’s third feature was Argo, his 2012 release about the 1979 Iran hostage crisis. The film won an Academy Award for Best Picture, though Affleck’s direction was, shamefully, not nominated. Affleck returns to Lehane for the source of his fourth feature as director, Live by Night, based on the author’s 2012 book about Prohibition-era gangsters in Florida.

Affleck’s considerable talents in front of the camera and behind it deliver a film that looks gorgeous and contains a formal polish. Legendary cinematographer Robert Richardson (JFK, The Hateful Eight) shot the picture, capturing Jacqueline West’s luxurious costumes and Jess Gonchor’s detailed production design in a perceptible luster. Richardson’s camera moves with fluid elegance, lending Live by Night a striking presentation throughout. The film also contains a number of excellent performances from the ensemble cast, including Zoe Saldana, Elle Fanning, Brendan Gleeson, and Chris Cooper. Nevertheless, something feels underwhelming about it, despite several intense, bloody shootouts and moments of technical bravado that will leave the viewer impressed.

Affleck plays Joe Coughlin (under a series of large fedoras) of Lehane’s recurring Irish family. The son of an Irish cop (Gleeson), Coughlin returns home from World War I with a hole punched through his morality. After carrying out a series of hold-ups, he’s enlisted by the head of the Irish mob in Boston, Albert White (Robert Glenister), as a foot soldier. The trouble is, Joe has been in the midst of a love affair with Mr. White’s special lady friend, Emma (Sienna Miller). When they’re discovered, Joe endures some nasty beatings and narrowly escapes White with his life, only to find himself in prison for a three-year stint for bank robbery. Emma isn’t so lucky. When he’s released, Joe pays a visit to White’s Italian rival, Maso Pescatore (Remo Girone), and asks for a job near to White so he can get revenge. The assignment lands Joe in Tampa, where he oversees a lucrative rum-running business.

At this point, plot has saturated Live by Night, but this summary hasn’t even reached the halfway point in Affleck’s 128-minute feature. Once Joe establishes himself in Tampa, the plot keeps moving, and the audience finally realizes Affleck’s story rhythm won’t slow—he’s going to keep this pace throughout. Joe and his right-hand man Dion (Chris Messina) set up a rum empire in Ybor City, making friends with the locals in the process. Among them is Graciella (Saldana), whom Joe eventually marries. Meanwhile, Joe encounters opposition in various forms: his friendliness with local Cubans and African-Americans rubs Ku Klux Klan members the wrong way; he’s forced to manage a local well-connected nutjob (Matthew Maher); he plans a post-Prohibition casino, but a religious group, headed by Loretta (Fanning), the daughter of the police chief (Cooper), opposes it. And, of course, there’s a final shootout with Pescatore and White.

Though viewers accustomed to epic-length gangster films will hope for something that lingers more, the result feels similarly paced to the Coen Brothers’ Miller’s Crossing (1990)—if you can’t keep up, you’re lost. However, because Live by Night takes place over the course of several years, it feels as though Affleck crammed too much story into a relatively brief runtime. The viewer becomes aware of editor William Goldenberg’s cuts, and the resulting subplot brevity, which suggest Affleck’s film was once much longer. A three-hour version of this story may have allowed the fascinating characters more screentime to grow, particularly its two underdeveloped romance subplots. One can only hope for a “Director’s Cut” on home video (Affleck’s The Town received an Extended Cut release on Blu-ray that featured a grim, albeit superior alternate ending, improving the film overall).

Although not quite to the high standard of Affleck’s earlier efforts, Live by Night offers enough surface sheen and kernels of character to entertain. Not every role feels fleshed-out, and the pacing puts the viewer at a distance, but there are several moments of greatness along the way, including a superb final gun battle and one helluva Model T car chase. Remarkably, despite the film’s glossy production value and attention to surface-level details, Affleck brings a tactile reality to his actors and scenes of violence. There’s also a wonderful scene of protest against those who remain intolerant against immigrants, since Joe believes in aligning with anyone who can make him money, as opposed to the prejudiced Irish and Italian mobs—a theme that cries out with contemporary relevance. The production feels inspired by the Hollywood artifice of classic, melodramatic gangster pictures, but also something grittier and more substantial. However overloaded with plot, theme, and production value Live by Night may seem, these elements come together into a gawkily watchable whole.