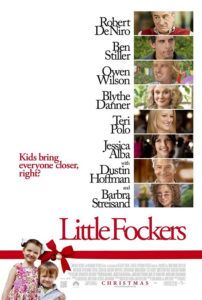 A bloated paycheck. That’s why everyone involved in Little Fockers agreed to a second sequel to 2000’s Meet the Parents. At least, that’s what viewers should tell themselves when watching this sluggish comedy (one so geared toward lazy holidaytime crowds that the poster even comes with a bow). This wholly unnecessary movie offers audiences nothing new, just a hodgepodge of tired jokes and familiar bodily humor, but it gives Universal Studios a sure-thing when it comes to a return of their investment. What an agonizing experience this is, watching talented actors like Robert De Niro and Ben Stiller subject themselves to material better suited for a soon-to-be-cancelled sitcom.

On this week’s episode of “The Wacky Focker Family”, Greg (Stiller) butts heads once again with his father-in-law from hell, Jack Byrnes (De Niro). This time Jack wants Greg to be “The God-Focker”, a paterfamilias of the highest order to uphold the Byrnes family legacy. Just ignore that it wouldn’t be the “Byrnes” name that Greg would be upholding; the writers do. So once again Jack is watching Greg’s every move. Greg’s behavior becomes suspect when he downplays his business relationship with a flirty pharmaceutical rep (Jessica Alba, in yet another bad comedy role in her long line of bad comedies). Of course, there’s a series of misunderstandings, botched cover-ups, and awkward situations, all topped with a hearty yuck factor of boners and barf.

A decade or more ago, De Niro was considered the greatest of all living actors. Roles in Raging Bull, Taxi Driver, and The Godfather, Part II seemed to solidify his status as a living legend. That is, until De Niro started making comedies. He took audiences by surprise when he showed his comedic side in 1999’s Analyze This, but then his choices became suspect when The Adventures of Rocky & Bullwinkle and Showtime arrived. Now, after years of self-defacing roles in embarrassingly bad comedies, the legend has proved he’s no longer a serious or respectable actor. And with this franchise, De Niro’s shame has reached all time lows. From wearing rubber breasts in Meet the Fockers to being the victim of Viagra-like pills here, it becomes clear the actor has no shame when it comes to what he’ll do for a paycheck.

As for the rest of the cast, all the players from the previous movies have returned, because they too wanted the money. Stiller never had any shame to lose, so his appearance shouldn’t surprise anyone; nor should Owen Wilson’s reprisal, which proves to be almost the same role as his recent dud How Do You Know. Barbra Streisand’s Roz Focker now has a televised talk show about sex, a device used only so the character can bring up her son’s lacking sex life to embarrassing effect. Teri Polo plays Greg’s wife and Dustin Hoffman his father, but both actors are reduced to mere cameos. Laura Dern is a new face, playing the principal to “the Harvard of kindergartens”. And the Focker children are Daisy Tahan and Colin Baiocchi, who curiously have small roles despite the title. Even Harvey Keitel is dragged into the mix in a walk-on role as Greg’s seedy contractor.

Director Paul Weitz (Cirque du Freak) takes over for Jay Roach and delivers a dreary experience, as his movies are typically flat and dull (save for About a Boy, which Paul directed with his more talented brother, Chris Weitz). No exception here. Writers John Hamburg and Larry Stuckey provide no end of recycled jokes from the first two movies. How many times can Focker be used as an allusion to the F-word? It turns out there’s no limit. However, there is a limit on the joke’s ability to make us laugh, and it ran out a decade ago. Hopefully Little Fockers puts the nail in this franchise’s eternal coffin, but perhaps that’s hoping too much. Audiences seem to love this dribble.