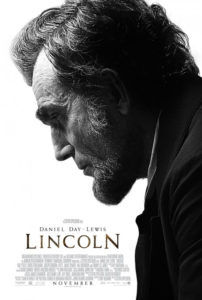 Steven Spielberg’s Lincoln does not open with our 16th president’s birth, does not (surprisingly, given this director’s history) explore Lincoln’s tumultuous relationship with his father, Thomas, nor does it provide biographical notes from his early days as a congressman and lawyer. Astonishingly, this is not a film that exploits with jealous history book attention every opportunity for cinematic greatness by portraying each of the most memorable events in Lincoln’s life, such as the Gettysburg Address or his assassination at Ford’s Theater (although both are referenced, they occur off-screen). Screenwriter Tony Kushner has instead concentrated his view of Abraham Lincoln through perhaps the president’s greatest victory, his passing of the 13th Amendment to the Constitution, as a means of demonstrating Lincoln’s quality as an idealist and president of brooding conscience—how his folksy, wise, steady temperament and legal background made him such a profound source of political persuasion and among America’s finest leaders.

In this sense, Spielberg’s film is a character study disguised as a political drama, wherein Lincoln must decide whether or not to delay the end of the bloody Civil War to pass a more far-reaching amendment. Through Kushner’s densely packed discussions of law and political cajoling comes an intimate but even more so intellectual representation, portrayed here by Daniel Day-Lewis in an uncanny resemblance to the real man. In another sense, Spielberg and Kushner also put the American political system on display, where Lincoln’s sly maneuvers outwit his Democratic opponents to the Republican-backed abolition of slavery. Being that Lincoln’s Emancipation Proclamation formed a legal “gray area” that might be contested after the war’s end, his sense of responsibility is questioned as he plays the political game to win enough votes in the House of Representatives to pass his amendment, even while representatives from the Confederacy travel to Virginia to negotiate peace.

Primarily set in January 1865, aside from the opening sequence on a muddy battlefield, the account takes place in exquisitely furnished but dimly lit chambers and White House salons, demonstrating an approach toward naturalism and restraint from otherwise expressive cinematographer Janusz Kaminski. Not quite a candle-lit drama, the film’s brown-toned lighting follows Spielberg’s likewise restrained approach throughout Lincoln; the director avoids his customary cinematic stylishness, perhaps because Kushner’s script never slows in its march from one significant debate to the next as it fully illustrates the U.S. legislative process. Rich costumes and period details rarely take the forefront, unless Lincoln remarks on the ornamental “flib-flub” insisted upon by his wife, Mary Todd Lincoln (Sally Field), for obligatory White House receptions. Spielberg has not made a costume drama about the pageantry of Lincoln’s era. Rather, Kaminski’s near-sfumato lensing consumes the surrounding earth tone palette of wood and mud for an outwardly natural setting, which may go overlooked by an audience rapt in the film’s political discussions and Day-Lewis’ fascinating performance.

Drawn from Doris Kearns Goodwin’s 2005 best-seller Team of Rivals, Kushner’s script depicts warring Republican concerns over the future of free slaves, with resolute abolitionist head Thaddeus Stevens (Tommy Lee Jones) playing a crucial role in the movement. As the film proceeds, Secretary of State William Seward (David Strathairn) and Republican Party founder Preston Blair (Hal Holbrook) counsel Lincoln on the risks of engaging in peace talks while simultaneously attempting to secure 20 much-needed Democratic votes to pass the amendment. Seward resolves to hire a trio of silver-tongued sharpies (Tim Blake Nelson, John Hawkes, and James Spader) to secure the 20 votes by means of persuasion, temptation, intimidation, and horse-trading, but not by monetary bribery. All fairly questionable in their principles, the practices by which they secure votes probably haven’t changed much in the last two hundred years, even if the House debates have. Watching such televised debates today, one sees staid, humorless etiquette followed to the letter; Lincoln’s era boasted shouting, name-calling, and passionate beliefs aired in kinetic floor debates that force us to wonder where the passion in American politicians has gone.

At home lamenting “four more years in this terrible house” after her husband’s reelection is the First Lady, whose persistent depression over the loss of her son Willie during the first year of the war has never subsided. Lincoln remains distant and almost plagued by her presence, as well as his eldest Robert (Joseph Gordon-Levitt), who, jealous of his father’s favoritism toward his younger brother Tad (Gulliver McGrath), is desperate to leave college and enlist. Scenes with Lincoln’s family feel secondary to the amendment push, padding the deliberately paced two-and-a-half hour runtime, which grows unexpectedly suspenseful as the vote draws closer, leading to a rousing climax when the vote goes through. But then the film continues on, somewhat unnecessarily, to cover Lincoln’s death a few months later in April, offering punctuated assessments from characters who question how history will view them after time has passed. This, in turn, tells us how we’re meant to feel toward these characters and comes off artificial next to the intense political discussions that came before.

Essential to Lincoln are the performances, including an extensive list of supporting players that includes far more than those impressive names mentioned above. Jones and Field are particularly good, as is Spader as the main huckster of the three. Nevertheless, it is Day-Lewis’ grave embodiment that carries this picture beyond wigs and false beards and political processes. His weathered, raspy voice and cracked features allow the actor to disappear into his role without a trace, evoking the figure’s solitude and inhabiting his humble, purposeful gestures. There’s also some lightheartedness when his down-to-earth Lincoln enters a room and instills silence, only to receive eye-rolls from listeners as, quietly smiling at his own plain-spoken wisdom, he recounts another in a long line of Honest Abe life-lesson tales. It’s far more than acting or mimicry that we see here; it’s an actor’s method of transforming him into someone else and making his audience forget there’s a performer at work. There are moments in the film where Spielberg rests on a silhouette or profile of Day-Lewis, and the image is so perfectly realized that we feel transported into the past.

More admirable than evocative, less passionate than intricate, Lincoln is a fascinating motion picture that details events and characters without stirring up Spielberg’s accustomed sentimentality that, in his most powerful dramatic films like Schindler’s List or Saving Private Ryan, provided another, arguably more accessible level of enjoyment. Spielberg’s style is comparably straightforward here—save for a sappy lantern-light transition toward the end—recalling his efforts on Amistad or Munich, where the story, impeccable production design (by Rick Carter), and political stage of the period take precedence over Lincoln’s folk-hero history. An audience must work at discovering the kind of man that was Abraham Lincoln by considering what’s shown and what’s implied, and as a result, the film is refreshingly intellectual and unconventional for a Hollywood historical biography. Although the degree to which we are moved by this story remains secondary to the academic structure, Lincoln is immersive and respectable, and one of Spielberg’s most disciplined undertakings as a filmmaker.