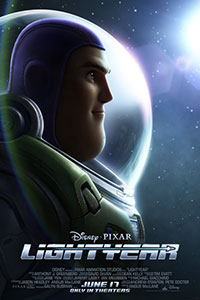 Lightyear opens with titles explaining that, in 1995, Andy, the young boy from Pixar’s first feature-length film, Toy Story, received a Buzz Lightyear action figure based on his favorite movie. “This is that movie.” From that launchpad, the inspired storytellers at Pixar deliver a sci-fi adventure that would feel right at home in the 1990s. Which is to say, it doesn’t rethink the genre but contentedly embraces clichés in a manner that would prove almost unironic if not for its subtle self-awareness. Lightyear plays out like a middle-of-the-road entry in the sci-fi genre. And coming from Pixar, that feels experimental. With allusions to everything from 2001: A Space Odyssey (1968) to TV’s Lost in Space and countless others (I will resist spending this entire review noting the various references), it boasts the usual assemblage of alien worlds, robots, hyperspeed crystals, zero-gravity jumps, time travel, and high-speed chases that propel the story. Inside that framework sit worthy themes about the value of change, progress, teamwork, and personal growth. Few of these ideas originated in the obstinate Buzz Lightyear action figure from Toy Story. But if we imagine Andy watching this at six years old, it’s doubtful any of those elements would have registered with him; he was probably more interested in the movie’s action and the toy’s karate-chopping arm.

A cynic would argue that Lightyear exists solely to capitalize on Pixar’s Toy Story brand without the trouble of making a fourth sequel. It’s an excuse to sell more toys, video games, and other merchandise with promotional tie-ins, so its high-concept premise draws from a financial incentive more than creative inspiration. That’s difficult to deny, except the film’s self-reflexive origins result in a pleasant curiosity. It’s a surprisingly straightforward outcome, presenting itself not as a film distributed in 2022 but a production that, to make it Andy’s favorite, would have reached theaters before 1995. Except, of course, it looks like a top-notch Pixar product of today with a reported price tag of $200 million, not a mid-1990s production with the iffy CGI often accompanied by the era’s sci-fi blockbusters. But setting aside the meta-ness of its conceit, Lightyear proves entertaining enough to divert adults and enthrall kiddos—complete with the dubious sense of story logic and plot holes galore found in mind-numbing blockbusters from 30 years ago (some things never change). Like many of those films, the momentum and basic genre pleasures prove too diverting to deny.

Directed by Angus MacLane, who co-wrote with Jason Headley, Lightyear replaces voice-actor  Tim Allen with Chris Evans (in Captain America mode) as Buzz Lightyear, the galactic Space Ranger. Allen’s voice was perfect for a plastic toy meant for children, with its square-jawed delivery, optimism, and overconfidence. But like many toy lines based on movie characters in the 1990s, the Buzz Lightyear action figure simplifies its more complex onscreen counterpart down to a few marketable characteristics that will prompt kids to shout “Buy me that!” in the store. Evans supplies added dimension as Buzz, a flawed ranger whose massive ship—a turnip-like vessel that explores the cosmos in the manner of Star Trek—lands on an alien planet in the first scene. Along with his friend and fellow ranger Alisha Hawthorne (Uzo Aduba), they find the planet infested with grabby subterranean vines and resolve to disembark. However, Buzz botches the takeoff, leaving the hundreds of people aboard their ship stranded on the surface. A year of colonizing and building infrastructure passes before Buzz can blast around the resident star to test the new hyperspeed crystals needed to get their crew home. 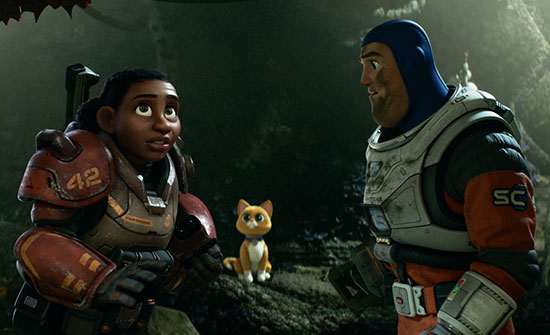 But when Buzz returns from his failed hyperspeed test, he learns that over four years have passed, and things have changed. People have settled into life on the new planet. To help Buzz adjust, they give him a robotic talking therapy cat named Sox—a combination of Teddy Ruxpin, R2D2, Twiki from Buck Rogers in the 25th Century, and Teddy from A.I. Artificial Intelligence (2001). Voiced by Peter Sohn, Sox’s hilariously deadpan delivery and robo-feline physical humor steal almost every scene. Even so, Buzz refuses to give up; he repeats the mission, and each new failure means he arrives another four years later. Attempt after failed attempt, days pass for Buzz, while over 60 years pass for his people. Only Sox remains unchanged. It’s all seen in a montage: Alisha gradually grows older, gets married, has a son and granddaughter, and passes on—a tender sequence to rival Up’s opening. During this montage, there’s a brief same-sex kiss that has caused uproar and even prompted countries to ban Lightyear. The moment occupies about one second of screentime. And if two people embracing for any length offends or prompts accusations of an agenda, then perhaps those finger-waggers need to examine their intolerance. In any case, Buzz eventually returns to find the planet overrun by robots and a familiar foe: the towering, purple-plated robot leader, Zurg.

Much of the action unfolds in a conventional format, with the usual array of ugly insects, android shootouts, and chases aboard spaceships. To take down Zurg, Buzz teams with the inexperienced “Junior Patrol,” consisting of Alisha’s plucky granddaughter, Izzy (Keke Palmer), a crotchety ex-con named Darby (Dale Soules), and the clumsy Mo (Taika Waititi). While they figure out how to work as a team, Headley’s script forces our hero to rethink his old-fashioned ideas about being a solitary hero who single-handedly saves the day. Instead, he must rely on a trio that doesn’t conform to the standards of white male heroism; they matter-of-factly represent people of different races and ages without becoming stereotypes. Later, a third-act twist involving time travel (with muddy logic that doesn’t make much sense) introduces a villain whose identity forces Buzz to consider what matters, preserving the past or embracing the new reality. Buzz is accused of changing, “and not for the better,” because of “all these new ideas.” What’s at stake in Lightyear, then, is Buzz’s capacity for personal growth against a traditionalist ideology with preset expectations. For all of Lightyear’s many trivial aspects, its themes have been carefully woven into the narrative’s genre fabric and, alas, echo discussions in today’s culture war all too well without becoming didactic.

All the while, Lightyear sells an action figure to Andy, and thus today’s audiences, by effectively reverse-engineering a movie that spawned a toy. Like the toy, Buzz’s Space Ranger suit has a wrist-mounted laser and familiar buttons, and he says catchphrases such as “To infinity and beyond!” The film doesn’t overemphasize these moments for Toy Story fans but naturally embeds them into the proceedings. The score by Michael Giacchino is big and generic. The visuals credited to cinematographers Jeremy Lasky on camera and Ian Megibben on lighting present a dynamic array of set-pieces and settings: a massive jungle, volcanic terrain, and “beyond the infinite” in true 2001 fashion. Watching Lightyear, you see the potential for Pixar to create a straightforward genre movie—something akin to their failed John Carter (2012). The question is whether Lightyear represents the first of many such merchandise origin stories. In Toy Story mythology, Woody the cowboy originated in an old-timey puppet TV show, so will Pixar make a Lone Ranger-style movie based on that fictional intellectual property?

Fortunately, Lightyear works as thrill-ride escapism but perhaps also something more—the social implications linger under the surface, waiting to be discovered. This isn’t something new for Pixar; their films have used entertaining packages to break down barriers and normalize marginalized groups before. In that sense, Lightyear is a typical Pixar film in that it supplies many potential meanings for the viewer, regardless of age. Their wizards specialize in narratives that resonate with children, grow through adolescence, and feel profound for adults. Few other animation studios can make that claim. Granted, Lightyear doesn’t pack the emotional punch of their best films, and the aforementioned twist and temporal logic feel underdeveloped and underexplained—to the point that the film might unravel if it’s dwelled upon. Nevertheless, the sheer spectacle and storytelling skill on display will be enough to keep most viewers enrapt in what, on the surface, delivers a sci-fi story that competes with most live-action alternatives.