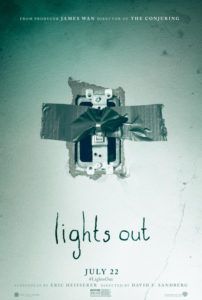 David F. Sandberg’s short film “Lights Out” from 2013 caught the attention of many in Hollywood, but horror maestro James Wan (Insidious, The Conjuring) was the first to swoop in and sign the untried Swedish filmmaker. Wan secured Sandberg a budget of $5 million, and the low-budget release Lights Out survives on a singular gimmick to the original short: Over the course of three wordless minutes as she prepares for bed, a woman (Sandberg’s wife, Lotta Losten) sees a female shape in the dark when she switches off the lights. When she turns the lights on again, the shape is gone. Back and forth, off and on, she sees the shape standing in the dark, until she turns the lights off and sees the shape has moved closer, right next to her in fact—a startling progression to be sure.

Taking that basic hook and making a full-length story (well, 81 minutes) was left not to Sandberg, but screenwriter Eric Heisserer, whose previous efforts on the 2010 remake of A Nightmare on Elm Street or the 2011 prequel The Thing do not promote confidence. Heisserer doesn’t bother wasting time building characters or creating emotional stakes before getting into the terror, and his director doesn’t seem to mind. Sandberg’s debut effort shows some clear signs of a novice, mostly in the charming way audiences expect from low-budget horror nowadays. But mostly, he and Heisserer imagine new ways of exploring how their central monster works, and how its would-be victims must get creative to stay out of the dark.

The story opens with a teaser of sorts, featuring Losten as a factory worker who gets spooked by something in the dark, and Billy Burke as Paul, the movie’s first victim. We soon learn Paul’s manic widow Sophie (Maria Bello) has a history of mental illness—she talks to someone named Diana, a dark figure who remains in the shadows. When Sophie and Paul’s young son Martin (Gabriel Bateman) begins to see Diana, he’s too afraid to sleep in his bed and instead sleeps in school, prompting the nurse to call Martin’s rebellious sister from another mister, Rebecca (Teresa Palmer). Alongside her dim boyfriend Bret (Alexander DiPersia), Rebecca tries to protect Martin, because she herself remembers seeing Diana as a child, and the memory gives her the heebie-jeebies.

Sandberg’s execution relies on finding new ways to turn the lights off and on again, such as Rebecca living above a tattoo parlor with an alternating red neon sign, or a crank-powered flashlight that can’t seem to hold a charge. Each fading light source teases the steady approach of the char-skinned Diana, a character whose backstory contains elements of two Wes Craven crazies: Freddy Krueger and Shocker. At first, Rebecca is convinced Diana will go away if Sophie just takes her anti-depressants on a regular basis, suggesting Diana is a figment of Sophie’s imagination; later, it’s proposed that Diana is the ghost of a former mental patient. Even by the end, the audience remains unclear as to Diana’s origins.

Most elements from the original short have been carried over, along with several tried and true horror clichés. Characters tape light switches on; Diana creepily scratches at the wooden doors and floors; the electricity inexplicably flickers; flashlights remain unreliable; and people investigate noises in the dark, though they should really know better. Cinematographer Marc Spicer keeps the night moments lit in a balance of light and dark, so even in the pitch-black we can tell what’s going on. And while Sandberg orchestrates a few sequences of heavy tension, Lights Out doesn’t quite click or retain a place in our minds after the end credits. Despite the addition of several characters well-acted by the cast, we’re left only remembering the monster’s gimmick, which seemed more straightforward and less overcomplicated by muddied attempts to explain Sandberg’s short film.