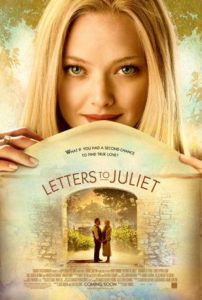 Letters to Juliet relies on entirely too many coincidences to be believable, even by Hollywood romance standards. The story speaks of destiny and of following one’s heart to the ultimate destination of love, but has a way of making the wonderfully romantic seem trite and impossible. Not to mention that the road there is filled with formulas so tired and insipidly written that enduring them becomes a true test for the viewer. Accordingly, plot details will be discussed in some detail in this review. Stop reading if that bothers you. But if you’ve seen the trailer for this movie, you already know what happens: The nice young girl ends up with the nice young guy. Are you really that surprised?

Amanda Seyfried (from Mamma Mia!) plays Sophie, a would-be writer who heads to Verona, Italy, with her self-centered restaurateur-fiancé Victor (Gael Garcia Bernal) on a “pre-honeymoon” of sorts. He uses the time to meet with buyers for his new eatery, while Sophie wanders into the House of Juliet, a place where, according to tradition, lovelorn letter-writers leave their notes pinned to a brick wall for Shakespeare’s Juliet to reply. Four wise Italian women, who require an English translator (yet curiously and conveniently all speak English), invite Sophie to join them in writing responses to the letters.

Sophie finds a letter hiding behind a brick dated from 1957; the letter never received a reply, so she resolves to respond. It was from a meek British fifteen-year-old, Claire, who was supposed to meet her True Love, a dashing Italian named Lorenzo Bartolini, but she was too afraid to show. Sophie replies to the woman, who conveniently, after all this time, still has family living at the same address written on the letter. And a few days later, the elderly woman Claire (Vanessa Redgrave) and her snotty grandson Charlie (Christopher Egan) arrive to find Lorenzo after all this time. Sophie tags along, empathizing with Claire as they meet every appropriately-aged Lorenzo Bartolini in Italy in search for The One. All the while, Sophie bickers with the pessimistic, unromantic Charlie, though it’s the type of bickering that makes it painfully clear that he’s who she’ll end up with.

Why do we know Sophie will end up with Charlie? Because the other option, Victor, is such a ridiculous one. Though Bernal’s role as the fiancé is minor, his character’s blatant wrongness tells us that he’s not right for our protagonist, so we root for Charlie. On their “pre-honeymoon”, Victor is more interested in taste-testing and wine auctions, and when Sophie finds something to do as well, he calls it a “win-win” that he doesn’t have to spend time with her. Meanwhile, Charlie, with his blond hair and blue eyes, remains the physical equivalent to Sophie. As for Claire, when she ultimately finds the correct Lorenzo (played by Franco Nero), isn’t it such a convenience that his wife is dead, and that Claire is able to embrace her time-lost lover after so long without reservation?

Audiences might wonder if this letter-centric tale comes from Nicholas Sparks, author of Dear John and Nights in Rodanthe and The Notebook, and a dozen other romance novels involving letters or romantic writings as a central plot device. Alas, Sparks has nothing to do with the production. Although, writers Jose Rivera and Tim Sullivan could’ve used his help. When the truly romantic story of Claire and Lorenzo has run its course, audiences are left to suffer through the remaining 15-minutes. The last scenes feature Sophie finally realizing her fiancé has no interest in her, and she predictably searches out her British beau, only to be delayed by a massively stupid mix-up in the final moment. The ending seems more apt for your standard rom-com, versus your standard romance. Then again, bored director Gary Winick may not know the difference.

Interestingly enough, in real life, Redgrave and Nero fell in love while working together on the 1967 production of Camelot. They had a child, Carlo Nero, in 1969, but later separated and moved on from one another. After a considerable number of years passed, eventually they reunited in 2006 and were married. This little behind-the-scenes tidbit represents the sole noteworthy factoid about Letters to Juliet, but doesn’t make the movie any better regardless. On and off camera, Redgrave and Nero remain the only interesting aspects of the movie, particularly when compared to their younger, but decidedly boring costars. Perhaps if the movie avoided the Sophie character’s romantic life altogether, and focused its attention on the tale of Claire, there might be some truth behind this otherwise contrived romance.