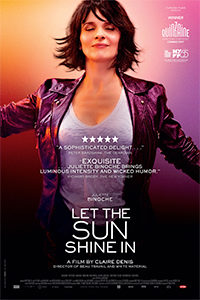 Claire Denis’ Let the Sunshine In alternates between comedy and tragedy. It’s a film about the need for love, not a romantic comedy, with a subtle yet exquisite intricacy to its treatment of character and narrative structure. From a certain point of view, it could be seen as a breezy, even humorous departure for Denis, whose stark material often investigates themes of identity through difference, Otherness, and the boundaries people erect between them, giving way to their interpretation as impenetrable for their distinctly French lyricism and aestheticism. Juliette Binoche stars as Isabelle, an artist and divorcée living in a trendy Paris neighborhood. Denis, who never shies away from raw depictions of sexuality, opens the film with a candid bedroom scene between Isabelle and her current lover, a portly banker whose baser qualities have attracted Isabelle for the time being. Their rapture, graphic and unabashedly physical, negotiates the pleasure and frankness of the scene with an almost literary observation of Isabelle, punctuated by dialogue that contains no allusion or pretense. This is how Let the Sunshine In carries on, with a ruminative view of its character, her string of lovers, and how she meets each as if Etta James’ “At Last,” the film’s recurring song, scores the moment. Denis’ embrace of Isabelle’s inner life reveals an at once innocent and complicated place reflected by the character’s enduring need for love in messy, shifting circumstances.

Isabelle’s emotional highs and lows fill the substance of the story, in the sense that the film maneuvers around her life, omitting what isn’t a priority. Her ex-husband, the much older François (Laurent Grévill), appears only when they have one of their occasional sexual encounters or arguments. And though she refuses to consider getting back together with him, she is supremely jealous and embarrassed when she discovers François had a brief affair with her art dealer—to the extent that she considers breaking off the business deal. Her daughter, the ten-year-old Cécile, plays only a peripheral role in the proceedings, a detail that suggests how Isabelle prioritizes her life, emotionally. François tells Isabelle that he’s concerned about her because Cécile, who lives with her father, has heard her mother crying at night when she stays over—a scene that escapes the viewer. But motherhood and her former marriage are aspects of Isabelle’s life that she tries to shed off and ignore, focusing instead on her string of lovers, thus so does the film. Similarly, we rarely see Isabelle paint; even her artwork is secondary to her personal life. Denis and her editor Guy Lecorne cut around most of this external drama, making linear leaps to omit the low points between inamoratos. 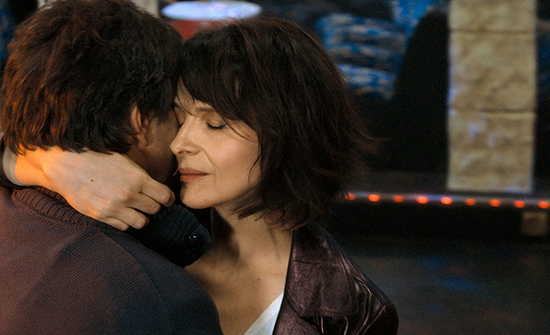 Her first companion, the banker named Victor (Xavier Beauvois), is typical of Isabelle’s lovers in the film, in that he’s achingly wrong for her. He’s a married man who, in a scene at a classy bar that showcases his particular brand of bastard, places Isabelle’s hand on his crotch, then proceeds to declare he’ll never leave his wife, but they should still have fun. Before telling her this, Victor berates a bartender with absurd requests, such as a glass of very hot water or “gluten-free olives,” as if to exert his power for Isabelle’s benefit. Although much to our relief she refuses Victor’s proposition and ignores his continued requests later in the film, her subsequent lovers are only modest improvements. Take the unnamed actor (Nicolas Duvauchelle) who she beds next; he’s another married man, but this one expresses only regret after their brief tryst. At last, there’s Sylvain (Paul Blain), a sensitive if coarse fellow whom Isabelle separates from on the recommendation of a friend, who tells her to find someone from her “milieu.”

The idea for Let the Sunshine In came to Denis when producer Oliver Delbosc recommended she adapt Roland Barthes’ A Lover’s Discourse: Fragments, a 1977 collection of the author’s thoughts about love and relationships. Denis collaborated on the script with novelist Christine Angot, an author known for brazenly incorporating her own sexual experiences into her literature, such as Incest from 1999, about her sexual relationship with her father. Together, using the format of Barthes’ episodic journey through love to inform the structure of their script, Denis and Angot incorporated their personal experiences into Isabelle’s story. As a result, the screenplay consists of scene after scene of achingly honest, emotionally vulnerable, yet often harsh moments in Isabelle’s life. They imbue the dialogue with a decidedly French lyricism that reveals, with brutal honesty, what drives Isabelle: her artist’s desire to feel, no matter the extreme nature of the emotion. Watch a beautifully observed two-shot conversation that lasts several minutes, where Isabelle and her friend talk in a restroom, and she confesses why a vulgar man like Victor attracted her, and how she worries that her love life is behind her. Moments like this reveal how Isabelle’s life alternates between states of mania, elation, and despair.

Binoche, in one of her fullest and most complex performances, has an integral relationship with Denis’ camera throughout the film. Cinematographer Agnès Godard seems to inhabit Isabelle’s space, look deep in her eyes, allowing the performance to emerge less from dialogue than Binoche’s body language, expressions, and the directness of the camera. One of the most revealing scenes in the film occurs at a weekend getaway where, one afternoon, Isabelle loses her temper at a privileged friend’s country estate over his boasting about owning a slice of Nature. “Yes, we know!” she shouts in a hilarious display. “It’s all yours, all of it!” As if to decompress from such a low point, Isabelle is drawn to the dance floor that evening, alone, moving to “At Last,” dressed in her clothing of choice: jeans and a leather jacket over a low v-neck shirt—a simple, almost pleasure-seeking outfit. A moment later, a complete stranger, Sylvain, who has been watching her, joins her in the dance. They move as if they had been in a timeless love affair. It’s a scene pregnant with Isabelle’s vulnerability and desire. Binoche’s performance is wonderful, modulated with an air of innocence and sophistication in Isabelle’s need for happiness, both in the carnal sense and to simply avoid being alone. It’s a profoundly empathetic role in a Denis film, as her work can sometimes feel at a distance, if not brutal and unforgiving. 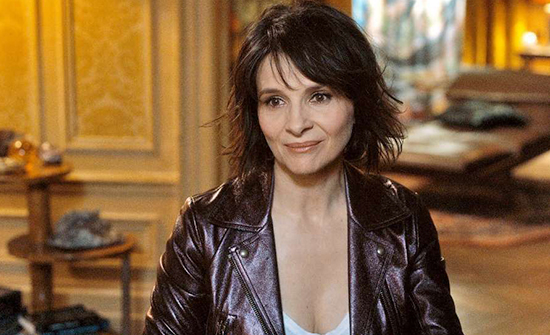 American audiences may have trouble with deciphering the meaning or lack of closure to Let the Sunshine In. A clue rests in the original title, which the U.S. distributors significantly altered. The French original, Un Beau Soleil Intérieur, translates to “A Beautiful Sun Inside.” The difference is substantial as it relates to Isabelle, who either radiates sunlight in the French title or accepts the sunlight of others in the English-language title. It is the difference between having the inner strength to continue onward despite a series of failed relationships, and almost certainly a future of disappointing lovers, or drawing strength from each relationship like a succubus while having no inner strength of her own. One title emphasizes her outward-radiating sense of self and personal agency; the other suggests that Isabelle’s strength comes from external forces, as though her only real agency comes from that which she derives from others. Since a title can inform our interpretation of a film, especially one with such an arcane structure and as amorphous about its protagonist as Denis has made, Let the Sunshine In seems like a grossly inappropriate translation on the part of Sundance Selects, the U.S. distributor.

Besides the original title, the final, 15-minute scene suggests how Denis views Isabelle’s story and approach to finding happiness. In a rare moment away from Isabelle, we see a fortune-teller (Gérard Depardieu) separate from his lover and lament his impending loneliness. The next day, Isabelle goes to see him, seeking advice about how to proceed with her life. He listens to her romantic woes and, gradually, he tells Isabelle to be “open” to new experiences and people, not-so-subtly paving the way for what we suspect will be his own romantic presence in her life. As the implication becomes clear, Denis begins to roll the credits, which occupy the screen for several minutes as the conversation between the would-be clairvoyant and Isabelle unfolds. The scene suggests that Isabelle, in her midlife crisis, will continue to look for love in the wrong places. But the dynamic between Denis throwing up her hands at this moment with the credits and Binoche’s expressions of optimism at the fortune-teller’s advice, suggest that there are equal measures of comedy and tragedy here. Locating its many facets isn’t as frivolous as the material might otherwise seem; it’s a thoughtful, serious, and multilayered film of teary-eyed breakdowns and fleeting bursts of elation.