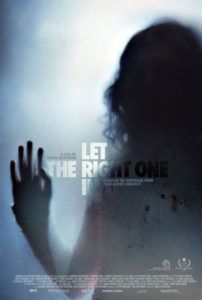 Isolating and bare, Let the Right One In combines appropriate uses of setting and story to tell an affecting drama rich in pathos. That the result features ingredients of your typical vampire movie should not dissuade you, nor should it spark images of a certain teen book series that dwells on similar themes of vampirism and young love. Perfect for cult status down the road, this Swedish film restores life to the undead vampire subgenre by instilling character development over bloodsucking, pangs of heartstrings more than stakes in the heart.

Set in a suburb of Stockholm during the 1980s, the film is about two misunderstood teens finding each other. Simple as that. Oskar (Kåre Hedebrant) is a frail, affable preteen mildly obsessed with all things macabre. He’s picked on at school by bullies and fits in precisely nowhere. Eli (Lina Leandersson) moves into Oskar’s apartment complex. Like him, she is alone. She’s also a vampire. The two meet one night on a frozen playground and become friends by the power of a Rubik’s Cube. Absent families bring the two closer together, Eli teaching Oskar to defend himself from social threats, herself an expert on survival. Meanwhile, she has feeding to do. Each friend fills the gaps for the other in a horror-infused version of melodramatic, adolescent romance.

Receiving praises abound for its seeming depth and profundity, the film’s brooding tone has been mistaken for substance by many critics. In a number of reviews, including Roger Ebert’s, comparisons are made to the work of Ingmar Bergman. Just because Bergman was Sweden’s best-known filmmaker doesn’t mean every film to come out of the country should be described as Bergmanesque. Why not equate every American picture to those of John Ford, or every Japanese film to Akira Kurosawa’s work? Instead, they’re comparing the cold distance and melancholy pace to Bergman’s profundity and poetry, when no such similarity exists. Bergman’s films contain meaning behind the structure and dialogue, his subjects lamenting over their failed understandings of God, love, and sex. And while Let the Right One In does represent the glum nature of teen angst, that’s where the philosophic exploration ends.

What the film does have is style. Tomas Alfredson directed this touching little vampire film, and he concentrates on restrained-but-beautiful camerawork in minimalist shot compositions. His frame, guided by cinematographer Hoyte Van Hoytema, lends the picture a creepy atmosphere that lingers under the skin long passed viewing. Wintry settings reflect the chilly, dead quality of the characters and their grave associations. Alfredson’s pitch is compelling, but ultimately sparse in commentary or subtext or existential rumination.

The two main characters are drawn with a skewed edge, an eerie oddity, yet there’s enough blank space on the page for viewers to project their own characteristics onto, thus identify with. The film’s horror elements are subdued in place of violence that informs the core relationship; brief, graphic scenes emerge in the movie, but they’re more about maintaining the uneasy mood than jolting us with their gore. Whereas another vampire movie might want to shock us, Alfredson prefers to absorb us in his characters, further delineating the line his film etches between horror and drama. Indeed, his film is more the latter.

Likening teen angst to vampire ostracism in a way “goth” teen viewers will dwell on, Let the Right One In makes ample brain candy when compared to the likes of Twilight, but the film is hardly insightful beyond its formal presentation. The yarn is composed of familiar ideas reformatted in a clever, artistic way. Fans of offbeat romances like Harold and Maude will drool over the material, whereas horror devotees hungry for quality directing in their diet of blood-soaked moviegoing will have something worthwhile to cheer about.