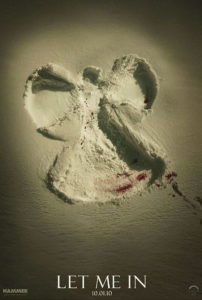 Since it was announced that Overture Pictures would remake the Swedish cult favorite Let the Right One In from 2008, fans of the original have been in an uproar. Those dedicated to Tomas Alfredson’s take on John Ajvide Lindqvist’s novel cling to that over-praised film like it was the most groundbreaking horror-drama since The Exorcist. Not so, as audiences should be able to think of at least one other series of films based around the burgeoning romance that spawns when a jaded youth clings to the allure of a vampire. The remake, called Let Me In, was written and directed by Cloverfield helmer Matt Reeves and doesn’t expand on the material in any profound way that would convince detractors of Alfredson’s film. But it provides a worthy English-language version for those unwilling to endure subtitles.

The most significant differences between the films are the cast and acting in general. Playing the disjointed 12-year-old boy, here named Owen, is Kodi Smit-McPhee, who is fantastic just as he was in The Road. Opposite him is Chloe Moretz (Kick-Ass) as Abby, the vampire forever confined in a 12-year-old’s body. Moretz appears less androgynous than the original’s Eli, played by Lina Leandersson, and that works against Moretz’s character’s needed monsterish qualities. But what she lacks in asexuality she gains in her ability to emote and add layers to the role—she behaves like an adult in a child’s body. Playing Abby’s “father” is Richard Jenkins, who does much with his few scenes. And Elias Koteas plays the local detective investigating a string of brutal murders that he eventually ties to Abby.

As with the original, the setting is the 1980s, although the location has moved stateside to a wintry Los Almos, New Mexico, a curious look-alike to the original’s Stockholm suburb. Complete with nods to David Bowie’s “Let’s Dance” and the popularity of Ms. Pacman, Reeves creates an effective period backdrop that successfully reminds us that no cameras or DNA evidence can explain away the bizarre events in the story—this is a world where mysteries still exist. Owen befriends the elusive Abby during late-night excursions to the frozen jungle gym in his apartment complex’s courtyard, where they bond over his Rubik’s Cube and their mutual displacement in the world. She replaces his nonexistent family (Reeves cleverly avoids showing Owen’s mother’s face to underline the point), and he will soon replace her “father”. The question is, does Abby come out of her shell when she agrees to Owen’s proposal to “go steady”, or is she simply playing a game that she’s been playing for decades, possibly centuries?

It’s the purpose of the boy’s eventual role as the vampire’s companion, and the vampire’s motivations behind employing him, that remain vague in both films, leaving this critic cold to the material. Reeves suggests that long ago Jenkins’ character was a boy not unlike Owen, someone in need of Abby’s brand of attention. In order to contain her beastly vampire attacks, her companion must expertly kill for her, disposing of the body in unassuming ways. Jenkins’ “father” has done this for years, it seems, and the years of meal killings have worn down on him. He’s no longer a good provider, and so Abby finds Owen, a needy and pathetic weakling who’s drawn to her power. In years to come, though, Owen too will grow worn down and ultimately will be replaced. And it’s that prediction that makes her choice to adopt Owen less dramatic or endearing—which is how many viewers interpret this film—and instead out of a plotting bloodthirsty necessity. Indeed, despite temporary companionship, the vampire needs Owen to survive, making their friendship more of a symbiotic, even parasitic nature.

Nevertheless, Reeves maintains Alfredson’s visual and thematic notes, keeping as close to the original as possible, while also trimming some necessary scenes and augmenting the gore to graphic horror extremes. He has enough sense to remove the silly looking cat attack from the original, and yet he employs special effects that render Abby’s feral attacks in CGI that look cartoonish. Devotees to Let the Right One In will appreciate how similar the films are to one another, though little aside from the better actors in the remake will differentiate them. Griping about the differences between the two will become a losing battle for anyone who favors Let Me In, if only because the original has the advantage of being The Original. But these are both well-crafted horror films that help to keep the vampire subgenre relevant, and they should be appreciated for different reasons on an equal plane.