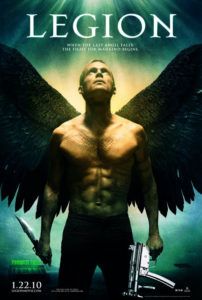 Screen Gems opted not to prescreen their latest release, Legion, for critics, and here’s why: The movie sucks, and they knew it. The religiously-themed actioner comes from Scott Stewart, first-time director and longtime visual designer for FX house The Orphanage. Stewart’s previous work reads like a laundry list of blockbusters (everything from Harry Potter to Pirates of the Caribbean to Iron Man), but his first solo effort suggests he should leave the writing and directing to someone else.

There’s nothing but possibility pouring out of the movie’s concept. The story involves Heaven’s angels sent to Earth to wipe out humankind. The problem is, Stewart doesn’t know what to do with that concept. For him, it’s enough to flash some scary monsters onscreen, unload a few hundred rounds of bullets, and then glow some light down from the clouds and call it a day. There’s a mish-mash of elements at work here, everything from The Terminator to your pick of zombie movies. A whole series of familiar tropes are wrapped up in a cliché-ridden bow, festering with the corniness of a SyFy Channel Original.

The story begins when an angel, named Michael (Paul Bettany), decides to help save humanity from God’s wrath, Michael sympathizes with the humans and believes they deserve a second chance. He drops from Heaven, cuts off his wings (Why? Who knows.), fills a car trunk full of machine guns, and heads off to protect The Chosen One. Michael believes an unborn baby will save humanity, but he doesn’t say how or why. Apparently, it’s not important. What is important is that Heaven has sent an army of angels to wipe out the human race and stop the baby from being born. The angels possess weak-willed humans and turn them into zombie-like monsters that climb like spider monkeys. The movie isn’t clear about this, but it’s implied that the angels eliminate most of the human population. That would seem an important detail to not be ambiguous about.

Meanwhile, the last hope for humanity works at a crummy diner in the Mojave Desert, eye-rollingly called Paradise Falls. Her name is Charlie (Adrianne Palicki); she’s eight months pregnant and smokes like a chimney. All of the characters inside the diner have their sob stories, all of which are told in sappy confessionals throughout the movie: The mechanic named Jeep (Lucas Black) believes it’s his duty to protect Charlie. Jeep’s father (Dennis Quaid) is the diner owner who redeems himself by protecting everyone in his dank establishment. The short-order cook, Percy (Charles S. Dutton), has made a lot of mistakes in his life, and one involves having a hook for a hand (nevermind how, the story doesn’t). Ex-gangbanger Kyle (Tyrese Gibson) wants to regain custody of his daughter. And the list goes on and on, every story more hackneyed than the last.

After Michael arrives at the diner to protect them, they face off against hordes of these angel-monsters. But apparently, not even the forces of Heaven can stop a bunch of losers with a trunk full of guns. The action is choppily edited and hard to follow. In-between waves of bad guys, the characters spill their hearts out, at the end of which you’ll wish the Apocalypse would just hurry up and get over with already. None of the characters are believable or more than just a one-dimensional device to propel the plot. Then again, the plot doesn’t really make sense, and the theological foundation is so poorly described that even devout churchgoers will be scratching their heads.

The one redeeming factor is the cast. Names like Paul Bettany and Dennis Quaid should be saving this material, as they’re generally likable actors, but even they can’t help it. Bettany does surprisingly well as an action hero, looking buff and cool while blowing down Heaven’s baddies. (Or are they good guys, since they’re doing God’s will? Whatever. Who cares.) But Quaid reduces himself to a greasy supporting role. By the way, what happened to Quaid’s career? Last year it was Pandorum, and now this? Perhaps he should be looking for a new agent instead of scouting for the next B-grade genre flick. What’s worse, Stewart has been working with Bettany on another, similarly-themed project: a comic book adaptation called Priest. That film is due out mid-2010 and involves a priest (Bettany) that gives up his vows to hunt vampires that took his niece. Whether or not the actor-director pair can make up for the disaster they’ve concocted with Legion remains to be seen. The source material there certainly has more potential than the stale scenario Stewart and co-writer Peter Schink have punched out here. If not, we’re all doomed. And while the result might not be Armageddon, it could certainly be another monumental bore like this one.