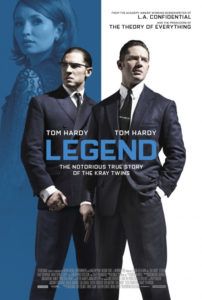 Twin brothers Ronnie and Reggie Kray ran organized crime in the East End of London in the 1950s and 1960s; however, their fame has more to do with the gimmick of their being twin and resultant media attention than their criminal skills. In fact, the Krays could hardly be called criminal masterminds—more like blunt objects that intimidated witnesses and boasted about their own notoriousness. Nevertheless, the subject of the Krays has a lot of possibility in the British gangster drama, at least in someone else’s hands other than American writer-director Brian Helgeland. Based on the title of his film Legend, Helgeland attempts to capture what made the Krays so fascinating to celebrities, politicians, and socialites, despite being little more than club owners, extortionists, and a front for Meyer Lansky. By the end, we’re still uncertain what made them legends.

A topic of some fascination among British crime aficionados, the Krays are portrayed in dual roles by Tom Hardy, who embodies the suave charisma of Reggie and the psychopathic unpredictability of Ronnie. The former was a clever businessman working on the margins of the law, whereas the latter brother was a diagnosed schizophrenic, a voraciously open homosexual in a time when such openness was frowned upon, and wildly enthusiastic about living a violent gangster lifestyle—like in the movies. Based on John Pearson’s 1975 nonfiction book The Profession of Violence: The Rise and Fall of the Kray Twins, Helgeland’s script and the formal treatment prove tonally disjointed. Helgeland, whose work as a screenwriter won him an Oscar for L.A. Confidential, while his directing credits include the silly A Knight’s Tale, doesn’t seem sure if he admires the Krays or despises them.

Helgeland’s drew unmistakable influence from Martin Scorsese’s Goodfellas. He paints Reggie as a likable gangster at first, arguably like Ray Liotta’s character in Scorsese’s film, whereas Ronnie is the Joe Pesci-esque loose cannon. There’s even an extended tracking shock similar to a famous one in Goodfellas, where Reggie takes his future wife Frances (Emily Browning) to his club, greets several guests, and gets seated at a fine table, all to her amazement. Their story is told in voiceover from Frances’ perspective, but her narration feels like it was written after-the-fact to give the film structural coherence, with Frances commenting on aspects of the story she couldn’t possibly know first-hand. Still, the voiceover doesn’t help Legend’s slogging pace, nor its scenes constructed to allow Hardy to showboat. Some of his dual role scenes are achieved through clever editing; elsewhere, as in brotherly scuffles between the twins, his two performances are brought together by computer technology (which has improved a great deal since Leonardo DiCaprio bowed dual roles in The Man in the Iron Mask).

Hardy’s individual performances are excellent, quite predictably, though his characters are two-dimensional at best. But one suspects that, because the actors were always performing minus a central character while filming, Helgeland failed to create scenes that live and breathe onscreen. Legend feels hollow and devoid of any kind of energy, whether it’s the energetic rush we feel in Scorsesian gangster pictures or the dread we feel throughout The Godfather. The story follows Reggie as he teams with his insane brother to rule London, eliminates the local competition (headed by Paul Bettany), falls for Frances, and teams with the Italian mob from Las Vegas (headed by Chazz Palminteri). Meanwhile, there’s a thin cop character (Christopher Eccleston) after the Krays, Ronnie’s unruly behavior threatens to bring down their empire, and Frances realizes that Reggie’s love of gangsterdom will never change.

An unfortunate score by Carter Burwell feels incongruous to the period with its electric guitar and drums, but it’s occasionally rescued by period-appropriate tunes. The unsuitable score sets the tone of the material, reducing what should feel dangerous and immediate into an inconsequential degree of audience involvement. As we shrug off the proceedings, we cannot help but notice production designer Tom Conroy’s splendid job recreating postwar London and costumer Caroline Harris’s dapper suits and elegant dresses. But if there’s a solitary reason to endure the two-hours-plus runtime of Legend, it’s Hardy’s performances, filled with flying saliva and unique mannerisms for each character. A particularly smart scene for the actor is when Reggie performs a spot-on impersonation of Ronnie, a moment that takes us out of the story just to remind us that Hardy is playing both men.

Reggie and Ronnie, now both dead after long terms in a prison and a mental institution respectively, have been the subject of films before—notably director Peter Medak’s 1990 film called The Krays, starring twins Gary and Martin Kemp, bandmembers from the new wave group Spandau Balle. Helgeland wants to deliver the definitive film about the Krays, and to do so he secured an excellent cast and delivers a sharp production. But Helgeland’s attempt to make a contemporary Goodfellas results only in a missed opportunity, as the writer-director’s approach never feels like an unapologetic slice of life that Scorsese’s film was. Instead, we’re kept at a distance through Frances’ narration and the film’s shapeless, uninvolving narrative structure, which leaves us still wondering what made the Krays legends.