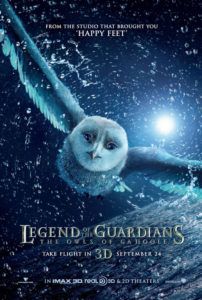 Based on the novels by Kathryn Lasky, director Zack Snyder’s animated fantasy Legend of the Guardians: The Owls of Ga’Hoole tells too thematic a tale for children, but its storytelling feels too elementary for adults. Filled with sharp-taloned battle scenes that are juxtaposed by light humor, the overall tone never finds a consistent balance. The result admirably brings weight to the typical coming-of-age tale in today’s all-too-frequent fantasy epics, yet somehow it loses its way. Maybe it’s that all the characters are bird-twitching owls; maybe it’s the familiar Tolkien-esque plot; maybe it’s that, even in animated form, Snyder’s directorial signatures have grown predictable and visually tedious.

The mythological broad strokes of the story involve a world of various talking owl kingdoms, some of legendary heroism, others of legendary evil. In the forest, two young brother owls, Soren (voice of Jim Sturgess) and Kludd (voice of Ryan Kwanten), find themselves on the ground, having fallen from their tree while practicing their yet-unproved flight skills. They’re quickly scooped up by scouts for an owl enslavement camp run by the resident owl Hitler, named Metalbeak (voice of Joel Edgerton). Along with his queen, Nyra (voice of Helen Mirren), Metalbeak and his army of Pure Ones enslave owls that are inferior by his standards, driving his minions to gather metal flecks from owl pellets (regurgitated bones and hair) for a devious plot.

Meanwhile, Soren and Kludd find their ideals have split. Soren wants to escape and commission the help of The Owls of Ga’Hoole, a mystical and only rumored-of group of honor-bound warrior owls separated from the rest of owl civilization by a vast, unchartable distance. Kludd has been brainwashed by Nyra, however, and wants to embrace his Pure lineage. So Soren escapes for Ga’Hoole and gathers a slew of comic-relief friends along the way. When he reaches his destination, which takes surprisingly little screen time, he’s trained by the top general of Ga’Hoole, Ezylryb (Geoffrey Rush), by way of an obligatory training montage set against the abysmal song “To the Sky”, from a band named Owl City no less. Soon Soren is ready for battle. Chances are you can guess who wins.

Each character represents a trope culled from dozens of fantasy films before this one. Indeed, the entire plot could be likened to The Lord of the Rings or Star Wars without much difficulty. Produced in Sydney under the Australian animation studio Animal Logic, the cast and setting have a particular Australian flair. In addition to the names already mentioned, Aussie actors Hugo Weaving, Abbie Cornish, Sam Neill, Essie Davis, Anthony LaPaglia, Richard Roxburgh, Leigh Whannell, and David Wenham provide their voice talents. Why Brits Sturgess and Mirren got involved is a question best reserved for Snyder himself. Perhaps he thought their accents were close enough in retrospect.

Despite the computer-animated format, Snyder’s direction contains the same stop-and-start slow-motion techniques he employed in 300 and his Dawn of the Dead remake. Mid-flight, the image twists and zooms to grab a close-up of talons scratching or eyes glaring. During momentous sequences of flight, the image slows to capture the splendor therein. Still, telling one owl from another becomes a challenge both visually and aurally—the types are usually either clean white and noble-voiced, or haggard and scraggly-voiced. The animators from the studio who produced Happy Feet have improved a great deal, achieving incredible realism in the appearance of the owls, the textures in their feathers, and the sky’s various atmospheric densities. Though the story is throwaway, this is a beautiful looking film.

Feeling overlong at 90-minutes for an adult must mean Legend of the Guardians feels even longer for a child, unless you’re ten-years-old and obsessed with youth fantasy fare. The 3D presentation and the incredible art direction might occupy a child’s attention span for a while, but Snyder’s film-speed antics simply won’t be appreciated by younger crowds. Still, images from the film look gorgeous, whereas the story backing them becomes increasingly tedious given its familiarity. Once again, Snyder backs a project more about visual presentation than storytelling, a trend that’s getting old for those waiting for the director to turn out a film worthy of his evident talent.