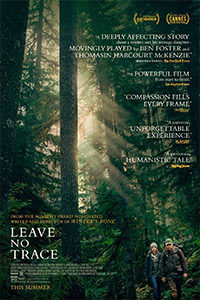 In the spare and ruminative Leave No Trace, Ben Foster plays Will, a military veteran whose experiences have left him shaken and compelled to retreat from mainstream American society. Along with his 13-year-old daughter, Caroline (Thomasin McKenzie), whom he calls Tom, Will lives in Forest Park, an expansive preserve in Portland, Oregon. Will and Tom rely on each other; they share a tent, forage for wild mushrooms, find ways to cook food without modern conveniences, play chess, and try to stay dry. Every so often, they head into town for groceries, but mostly they keep to themselves. Will teaches Tom a variety of subjects from books and his own experiences, and she’s well ahead of other girls her age. And while others might look at this lifestyle with sadness and call them homeless, their situation is an active choice and an alternative to the rules and regimentation of conventional living. Their off-the-grid existence implies that home is not a place, it’s a sense of family.

From a surface-level plot synopsis, Leave No Trace bears a certain resemblance to the 2016 indie comedy Captain Fantastic, also about a family living in the wilderness of the Pacific Northwest. Both films feature turns of plot in which a life on the margins is brought into question by authorities, forcing a change. But writer-director Matt Ross’ playful scenario used extreme dramatic highs and lows, punctuated by offbeat humor, complete with left-wing political views held by the paterfamilias and a stern opposition in the form of Frank Langella’s conservative, disapproving father-in-law. A crowd-pleaser, Captain Fantastic ultimately led to a comprising finale that allowed everyone in the audience some level of satisfaction, regardless of their views. Ross’ comparatively accessible treatment is a far cry from that of Leave No Trace’s director Debra Granik, whose ponderous, elegiac view of her survivalist characters captures the quiet reality of their choice to be outsiders.

Based on the 2009 novel by Peter Rock, which the author based on a true story, the screenplay was adapted by Granik and Anne Rosellini, who together made Winter’s Bone in 2010. Similar to that earlier collaboration, Leave No Trace considers a functioning routine within an isolated terrain. Michael McDonough, the cinematographer on both films, shoots his subjects as minor figures in a scopic, gorgeously untamed landscape. Will and Tom rarely take over the frame; they remain components in their more grandiose and sublime natural surroundings. The lack of score in the wilderness sequences leaves the viewer with an aural palette of forest sounds, such as wind, flora rustling, and bird sounds. That degree of quiet feels frighteningly interrupted by the voices of intrusive dogs or people, and the lensing of Nature’s enormity shrinks to almost claustrophobic degrees after a mistake leads to authorities discovering Will and Tom’s camp.

Social Service agents bring Will and Tom into custody, subjecting them to questions and insisting that they compromise to a more traditional way of life. They’re sent to live on a Christmas tree farm, where Will takes a job, and they live in a small house. And while Will, never comfortable around people given his PTSD and mistrust of bureaucratic systems, refuses a telephone or any unnecessary human contact, Tom realizes she enjoys the company of others. Although they soon leave the farm and head far away from the prying influence of authorities, Tom begins to question what kind of life she wants to lead, and whether their lifestyle has robbed her of desired experiences to supply Will with the isolation he requires. But rather than spell out these dramatic positions in obvious dialogue or speeches, the film reveals them through intentional pacing and committed acting.

Foster may be an unlikely choice for Will, given his track record of regularly playing the most unhinged character in whatever film he’s in, often supporting roles from the jealously devoted right-hand killer in 3:10 to Yuma (2007) to the unpredictable brother in Hell and High Water (2016). Here, Granik demonstrates that Foster’s capacity as an actor and leading man has been largely undervalued and narrowly scoped thus far. His performance carries the understated weight of Will’s trauma without the obvious signs, while also never losing his boundless love for Tom. The film’s study of Tom is just as intricate and true. New Zealand born McKenzie offers a performance comparable to Jennifer Lawrence’s powerful breakthrough in Winter’s Bone, carrying a naturalistic composure and emotional rawness free of artificial expressions, although decidedly more peculiar than Lawrence’s screen presence. Both actors embody their roles, adding to the film’s immersive quality.

If Captain Fantastic functioned on a series of accessible dramatic and comedic points, Leave No Trace operates somewhere in the middle, on a measured ground where Foster’s smoldering performance and McKenzie’s innocent, curiosity-driven presence guide the viewer’s experience. Granik brilliantly delivers the viewer into the characters’ spatially and socially secluded world, making otherwise normal, crowded living environments seem oppressive and even dangerous by comparison. Despite the above comparisons, Leave No Trace lacks the survival urgency of Winter’s Bone; it’s something altogether dissimilar, contemplative and empathic toward characters whose lifestyles and worldviews are vastly different than our own. This is stripped-down filmmaking concerned with the relationship between people and Nature. Granik’s rich visuals give the viewer a vast cinematic territory to explore these intricate and quiet characters in rewarding, subtle ways.