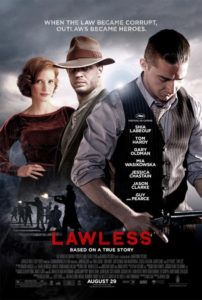 Hollywood loves a good yarn about so-called “entrepreneurs” who, because demand supplies an opportunity, provide an illegal service or substance—be it drugs, weapons, prostitution, or alcohol. Movies about gangsters of this kind are part of the Hollywood tradition and create icons out of historical and fictional characters like Al Capone or Tony Montana in films ranging from the original Scarface to Lord of War. Indeed, there’s something of a wicked “American Dream” in these stories, in which bad men make a living for themselves in a hail of bullets and splattering of blood. Such stories were popular in the Golden Age of Hollywood; however, in those days, the movies would usually end with the criminals receiving their due comeuppance. History is rarely so morally tilted, as Hollywood has since learned, particularly for bootleggers who, during Prohibition, were seen by many in the public as heroes rather than criminals since they provided something the law unjustly took away.

Lawless tells the story of the Bondurants, a family of moonshining legends. These real-life Prohibition bootleggers hid their stills deep in the woods of Virginia’s Franklin County, which was then (and still is) considered the moonshine capital of the world. Into familiar territory this film goes, like a marriage between The Untouchables and the recent television miniseries Hatfields & McCoys, wherein Tommy guns and brass knuckles meet the Virginian drawl of Appalachia. Based on the story of author Matt Bondurant’s grandfather, as detailed in his book The Wettest Country in the World, on which the screenplay by Nick Cave is based, the film opens in the 1930s and finds the Bondurant family legend already firmly established. They’re led by the eldest brother, Forrest (Tom Hardy), who some say is “invincible,” although he’s also the brains of their company; a hothead, brother Howard (Jason Clarke), plays a background role; the youngest brother Jack (Shia LaBeouf) has long been left out of the dirty dealings of the moonshine trade, but he’s desperate to make his mark. Jack narrates and plays the central role.

Off a woodland road, the Bondurants run a filling station and restaurant that doubles as their base of operations. One day, city-girl Maggie (Jessica Chastain) walks in and asks for a job tending bar and bookkeeping, which she earns because Forrest is intimidated by her beauty. Jack, too, has his eye on a girl, a cute churchgoer named Bertha (Mia Wasikowska). The family’s young rickety handyman named Cricket is played by Dane DeHaan, from Chronicle, in the kind of role engineered to gain our sympathy and eventual outrage when he unjustly dies. This is a good time to mention the villain, Chicago “special deputy” Charlie Rakes (Guy Pearce), an obsessive-compulsive, anal-retentive wacko who shaves an inch-thick part down the center of his scalp, so it’s oh-so-perfectly straight. He’s very effective at making us despise the law: almost cartoonish in his accent and mannerisms, Rakes always wears leather gloves, his prostitutes cry afterward, and he’s rarely far away from his mirror. In a way, he reminded me of Cate Blanchett’s role in Hanna. Taking sadistic steps, Rakes and his crew hunt down Franklin County’s bootleggers, offering deals to many of the Bondurants’ competitors, although Forrest refuses to budge, and eventually, it’s an all-out war between the law dogs and the bumpkins.

Contrasting scenes of extreme violence with Jack’s becoming-a-man arc, the film alternates between shootouts and LaBeouf’s charming, layered performance—possibly his best “serious” portrayal yet, far removed from his usual routine of outrunning giant robots. Cave’s colorful writing contains no end of hard-edged characters and period-centric exclamations, but the impressive cast assembled by director John Hillcoat (The Road) can speak exclamations like “jeepers!” and “sweet boots!” and make them sound natural. Hillcoat and Cave collaborated once before on the excellent Australian Western from 2005 called The Proposition, another film about a band of criminal brothers battling against corrupt lawmen. And though Lawless doesn’t match The Proposition’s arty, spare, unrelenting tone, the result is nevertheless a solidly entertaining excursion into America’s outlaw past. Watching these incredible actors place depth where there is none, or very little, helps wash over some of the plot holes and underdeveloped characters. For example, Gary Oldman appears as the top gangster in the next county over, but his role is no more than an extended cameo, despite being third billed.

There isn’t much dimension to these proceedings and not an inkling of greater meaning beyond the story at hand, but it’s such a well-made picture that one can hardly protest Hillcoat’s impeccable craftsmanship. If one additional quibble must be made about the production, it’s that occasionally the choices in music seem more like modern interpretations of Depression-era songs, as opposed to employing bona fide music from this era or the preferred classical score. But overall, it’s an impressive Hollywood production from The Weinstein Company and cinephile dream producer Megan Ellison, under her label Annapurna Productions, whose mission is to supply filmmakers like Hillcoat, Paul Thomas Anderson, and Spike Jonze with the means to make their next auteur effort. As a result, Lawless boasts high production values, rendering 1930s Franklin County with splendid detail and outdoor location shooting. And clearly, they’ve spared no expense on casting. Watching Hardy, Pearce, LaBeouf, Chastain, Wasikowska, and the rest in this pulpy fare is pure escapism and compelling drama, with a mild history lesson thrown in for good measure.