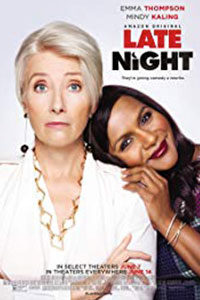 Mindy Kaling makes the move from television to features with Late Night, an indie comedy about the difficulty of female comedians making it in a traditionally male-dominated profession. In her first screenplay, Kaling draws from her time writing for The Office as the only female of color in the room. She also stars in the movie, playing an average nobody who, through a ridiculous set of circumstances, lands her dream job writing for her favorite late-night talk show hosted by Katherine Newbury, played by Emma Thompson. The show has been around for decades but has run out of steam and, predictably, Kaling’s inexperienced Molly Patel has just the comic chops to revitalize the show. Arriving after its Sundance premiere, where it incited a bidding war that ended in a $13 million asking price paid by Amazon Studios, Late Night bears a touch of rom-com convolution, like a low-key version of 30 Rock. The movie is also steeped in the female experience and a social consciousness that outweighs its humor.

Kaling’s screenplay digs into issues of workplace gender and racial discrimination, but she doesn’t make women out to be mere victims. Katherine Newbury earned her place on the late-show circuit by ultimately doing the same sort of routines as Johnny Carson and David Letterman—working from familiar jokes written by her all-male, all-white group of Harvard graduates. Among them, Reid Scott plays Tom, the head monologue writer; Hugh Dancy is the charming sexpot in the room; and Max Casella, Paul Walter Hauser, and John Early also appear. Though she never sees her writing staff, and in some cases doesn’t even know her writers’ names, Katherine insists that they avoid writing about women’s issues or voicing her political opinions, reaching instead for “excellence”—a notion that apparently means the denial of her identity. And that’s why her show has plateaued, inciting the network president (Amy Ryan) to begin phasing Katherine out in favor of a younger comic (Ike Barinholtz).

Fortunately, Kaling’s screenplay allows Katherine to be more than a television show host; at home, she struggles with depression, has a husband (John Lithgow) in the early stages of Parkinson’s, yet for someone on television five nights a week, she’s painfully out of touch on issues of race and social media. When her producer (Dennis O’Hare) demands that she get a female writer to help the optics of her situation, they hire the first female who shows up for an interview. But Molly is something of a curiosity thanks to her Swiss cheese characterization. Without much background to the character, she claims to idolize Katherine Newbury and to have researched her show extensively, yet on her first day of the job, she has no concept of the backstage goings-on of a talk-show or how a writer’s room works.

Regardless, Molly knows enough to recognize that she’s been dropped in the middle of a privileged boys club, and she’s looked down upon for being a diversity hire—Katherine openly tells Molly that she’s a product of tokenism. Elsewhere, the writers were just fine welcoming Tom’s younger brother as a nepotism hire (How else is the white patriarchy supposed to persist?), and so they resent their new female coworker. But Molly isn’t threatened. “I saw most of the writers. I’m not worried about masculinity,” she says. Later, the inexperienced Molly claims to have never performed stand-up, except on the loudspeakers of her chemical plant. But somehow she seems completely confident and composed when she appears before the audience of a cancer fundraiser she’s organized in memory of her late father. It’s a one-dimensional characterization, leaving the bulk of the dramatic lifting to Thompson.

Unfortunately, most of Late Night’s laughs result from writer’s room insults or observations about white men complaining about their unfair work environment, while many of the jokes performed by Katherine on the show or in the various stand-up scenes fall flat. This makes for awkward, insincere moments when the movie’s live talk-show audiences roll in the aisles with laughter over jokes that frankly aren’t that funny. It’s a regular problem with movies about comedians. Titles from Punchline (1988) to All About Nina (2018) lack authenticity because they fail to replicate quality jokes that would make their stage performances believable. Still, as Katherine transitions from a Tom Snyder into a Seth Meyers, there’s one worthy comic scene conceived by Molly: Katherine plays “White Savior” to people who are otherwise denied because of how they look—she hails a cab for two African American men or ensures a designer store pays attention to a plus-size woman.

It’s not that Late Night is unfunny, but as a viewer, you become acutely aware of how little you’re actually laughing out loud. This is a movie where the biggest reaction is a chuckle that accompanies its general pleasantness. It’s best to think of it less as a straightforward comedy and more of a social dramedy for our times, asking questions about gender equality from a female point of view. Despite potentially heavy themes, director Nisha Ganatra gives Late Night a small-screen appeal, being well-versed in similar material from HBO’s Girls to The Mindy Project. Through it all, Kaling is charming onscreen, while Thompson uses her enduring charisma and quick wit to bring Katherine Newbury to life. Fans of either performer will be delighted by the showcase they’re given, and they’ll have something to talk about afterward.