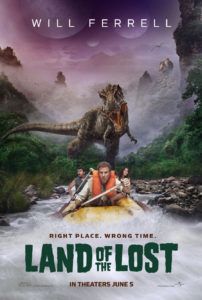 Is Will Ferrell still funny? It’s incredibly hard not to laugh at him when he commits so completely to being stupid. Try not chuckling when he takes off his shirt to proudly display his flabby torso, which you know he’ll do because I think he’s contractually obligated to in all television and film appearances. But now the reaction seems less rooted in the intended inappropriate hilarity, and more in the realm of Oh, this again. His latest film, Land of the Lost, tests the viewer’s tolerance of the funnyman by failing to give him any limitation or direction (in spite of the title, there should still be some plot trajectory).

The original series by Sid and Marty Krofft, those jolly and weirdo social satirists behind H.R. Pufnstuf, aired from 1974 to 1976 and garnered an impressive fanbase for a live-action Saturday morning program. The show featured absurd storylines told through cheap miniatures, chunky makeup, and sloppy claymation dinosaurs. At least the effects have improved on the new film, also produced in part by the Kroffts, along with Universal Studios and Relativity Media. Plenty of computer-generated dinosaurs and wondrous locales make up the scenery, but the movie lacks adventure and humor, the only two selling points this material has going for it.

Ferrell plays Dr. Rick Marshall, a “quantum paleontologist” whose half-baked hypotheses about breaking into alternate dimensions for fossil fuels makes him the laughing stock of the scientific community. Along with British scientist Holly (Anna Friel, subjecting herself to short shorts, boob grabs, and utter humiliation) and Southern-fried hick Will (Danny McBride), Marshall finds his dimensional rift, an unknown place with three moons where time and space converge. This means the ensuing adventures involve all manner of possibilities. A cheap motel is half-imbedded into the ground, but so are pieces of the Statue of Liberty and Bob’s Big Boy restaurant signage. Mostly our heroes deal with a super-intelligent T-Rex named “Grumpy”, a horny monkey-boy named Chaka (Jorma Taccone), and lizard-men called Sleestaks (the two that speak are voiced by Leonard Nimoy and John Boylan).

The story jumps around from venue to venue, showcasing all the bizarro land has to offer. Some of the costumes and puppetry are impressive, because another production might have just computer-animated the various creatures. Backgrounds have a phony edge, so we can always tell when the actors are standing in front of a green screen. Grumpy looks like the rough sketch for the T-Rex from Jurassic Park, making us question why they haven’t figured out how to improve on, or at least match Spielberg’s classic since 1993. But really, the only true effects are Ferrell antics, which to my knowledge don’t require the assistance of Hollywood effects gurus.

Dumping about $100 million into this production seems contrary to the campy Kroftt original. Why does it cost so much to make cartoonish characters and dinosaurs come alive onscreen? The Kroffts did it back in the 1970s every week for nickel-and-dime budgets, so enduring this expensive, overblown Hollywood movie makes us wonder why director Brad Silberling didn’t cut costs and make the result intentionally campy. Imagine cheap Styrofoam sets, paper mache trees, and claymation creatures in a summer blockbuster—wouldn’t that have embraced the show’s nature but also retained the movie’s ultimate desire of making a movie-parody of the show? Alas, we’re subject to so-so computerized special effects that don’t look too real, but clearly they’re expensive. Or maybe I’m wrong altogether and the budget was spent on Ferrell’s undoubtedly overblown salary?

Completely relying on the random, non-family-friendly humor of its star, it’s a wonder Land of the Lost even has a script, versus just story flash cards the actors improvised around. Ferrell seems to be doing whatever he wants, and sometimes that’s gloriously unfunny and stupid (in a bad way). Even while plugging the marketing partners at Subway, he appears to be rambling on about nothing until he ends with his in-film advertisement. The movie goes nowhere and, at least at my screening, the audience remains silent save for one or two occasional outbursts of laughter. Worst of all, by the end we feel like the experience was a massive waste of cinematic resources, not to mention our time.