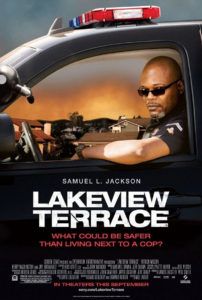 Samuel L. Jackson can be your best friend or your worst nightmare. That’s something I’ve learned from his movies. And even when he’s acting friendly, you still feel like he could destroy you at any moment. There’s a frightening intensity that burns beneath his eyes. In Lakeview Terrace, he’s a suburban nightmare made flesh—his character’s bouts of unrestrained anger and racism are followed by irrationally aggressive behavior, dogmatic parenting, and reactionary violence. And it doesn’t help that he’s a cop.

Widower and single-father Abel Turner (Jackson) doesn’t care for his new neighbors Chris and Lisa Mattson (Patrick Wilson and Kerry Washington), first-time homeowners enjoying that their property has a sizeable yard, lush garden, and swimming pool. They’re nice people, but Abel can’t get over that Chris is white and Lisa is Black. In one scene he tells Chris, who’s listening to rap music, “You can listen to that noise all you want, but when you wake up in the morning, you’ll still be white.” Dropping none-too-subtle hints, such as shining security lights through their windows and flat-out telling them to leave, Abel makes his feelings clear. And for a while, there’s a macho cat-and-mouse game where Abel and Chris push back and forth over neighborly privileges, vying for their right to stay or just be left alone.

Director Neil LaBute organizes a film intent on making the viewer question the two leads, Abel and Chris. Each seems to have issues with interracial couples. Abel because they remind him of how he lost his wife; Chris because he’s tired of feeling threatened, of being “on the front lines” whenever a Black man realizes he’s married to Lisa, such as with Abel. LaBute’s discussions of race are seemingly always interrupted by the escalating hostilities, fueled by each man’s narrow-minded assumptions about the other. But this dynamic fails when the script makes it clear Abel is little more than a despotic, unhinged, curiously motivated psychopath intent on terrorizing his neighbors.

LaBute’s commentary works best as a concept after the fact, when we realize his film wouldn’t have the same meaning nor earn the same reaction had the races of its characters been switched. When we start envisioning Abel as a racist white cop and Chris as a Black victim, we find a story in the vein of Rodney King’s beating (indeed, Los Angeles’ actual Lake View Terrace is where King was assaulted by officers in 1991), only with a less sympathetic villain. LaBute challenges exactly how his audience is racist, as he assuredly believes we all are, even by the smallest degree. Consider how he forces us to doubt the characters. Are those doubts based on race? That we’re even thinking about these issues forces me to admit they are. But nevermind such engaging observations about the audience’s unconscious prejudices, there’s a thriller to sell! After all, who needs questions of morality when there’re action sequences and gunfire to behold? The film’s third act tosses out its thought-provoking situation, transforming a clever drama into a garden variety thriller.

Except, LaBute isn’t a director of thrillers. He’s a writer-director of the blackest comedies, scathing tales of decency gone awry, and people’s natural evil emerging in the everyday. His 1997 debut In the Company of Men featured Aaron Eckhart playing a cruel game to get back at the women who’ve hurt him; he chooses a vulnerable deaf woman as his target. 2003’s The Shape of Things is about a radical student (Rachel Weisz) who dates a loser (Paul Rudd) only as a social experiment. These often cruel notes on the depths of humanity are where LaBute is best. He raises similar concerns with Lakeview Terrace, for a while anyway, abandoning them altogether for a product frustratingly similar to the good-guy vs. bad-cop setup of Unlawful Entry.

Until the last fifteen minutes of the film when LaBute ceases to challenge us, but rather aggravates circumstances to the predictable nature of Hollywood potboilers, there’s much to admire. Given the finale, however, I think LaBute missed an opportunity to solidify the heavy commentary with an equally poignant message. After the gunsmoke clears, we wonder what anyone learned from the experience, if anything. Considering the time spent building these characters, each of them worth investing the time to get to know, their outcomes disappoint by being merely entertaining, instead of provocative like the rest of the film. Then again, maybe his discussion prompt about race is enough.