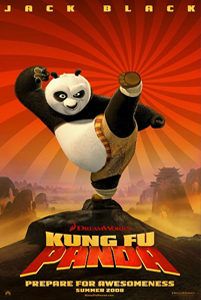 Animation’s greatest feature resides in bringing the impossible to film without the audience noticing strings or seeing through sometimes transparent special effects wizardry. When fantastical events occur onscreen, cartoons serve them up drawn with the same hands or (the now standard) computers that constructed the entire environment, integrating a spotless self-contained verisimilitude into every aspect of the film. With animation, the world is as you make it, existing in its own unreality. And what other format could have conceived Kung Fu Panda, a movie wherein a chubby panda bear moves faster than Bruce Lee in all his martial arts glory? Po, the overweight panda in question, is voiced by the similarly round Jack Black, who lends his displaced character an appropriate lovable loser quality. Working for his noodle-peddling father Mr. Ping (voice of James Hong), a goose, Po almost certainly has some identity issues stemming from his biologically impossible parentage. He dreams of something more than waiting tables, like becoming a kung-fu warrior of epic proportions—such as those training at the temple high up on a nearby mountain.

Separated by thousands of steps below, in the Valley of Peace, Po is resigned to noodles until an ancient tortoise, Master Oogway (voiced by Randall Duk Kim), announces he will choose the Dragon Warrior, a prophesied kung-fu master of incomparable skill. The chosen one’s task will be a head-to-head fight against the evil Tai Lung (Ian McShane, perfectly cast) for the Dragon Scroll, which is said to contain the answers to unparalleled power. Surely the foretold champion will be one of the Furious Five trained by Master Shifu (a gruff-voiced Dustin Hoffman), whose names simply illustrate their animal designations: Tigress (Angelina Jolie), Mantis (Seth Rogen), Monkey (Jackie Chan), Crane (David Cross), and Viper (Lucy Liu). But when Po bursts in on the selection ceremony, the wise Oogway shakily points his finger to the film’s unlikely hero. We realize celebrities populate the cast of talking animals to a superfluous degree when Jackie Chan and Seth Rogen have barely a handful of lines each. With distinct voices like McShane, Black, and Hoffman assigning audible personality to their roles, I can’t help but wonder why Dreamworks sought “names” for every part, no matter how inconsequential.

Inspired by recent ventures into martial arts fantasy like Crouching Tiger, Hidden Dragon and House of Flying Daggers, production designer Raymond Zibach fills the screen with picturesque locales and Chinese culture. One of the film’s many battles takes place high above the clouds on mountainous peaks, suspension ladders connecting the lot; Tai Lung’s wowing prison escape occurs in underground caverns lit with an ominous flare-red glow; and the most impressive exchange comes about when Po and Shifu clash over the last dumpling. The action is familiar to recent martial arts adventures like The Forbidden Kingdom with hero and villain sparring gracefully across rooftops, springing high into the clouds, and then smashing into the ground with effortless control. Po, however, bounces about the screen emitting the hollow sounds of an exercise ball, not so much graceful like his fellow warriors, but inelegantly lucky as objects rebound from his flab into an enemy’s face. Co-directors Mark Osborne and John Stevenson delay the action’s speed occasionally, reminding us in slow-motion how absurd Po’s gyrations are, and putting that last riotous touch on the film’s ongoing fat humor.

Dreamworks Animation remains the distant Number Two behind Pixar. Their output hasn’t quite achieved that beautiful balance of narrative and visuality Pixar has mastered (and which elevates their crop to high art). Nevertheless, Dreamworks titles like Bee Movie and Over the Hedge inspire hearty belly laughs and the occasional moment of visual splendor. But Dreamworks seems determined to construct their stories, humor, and animation style to meet the needs of younger viewers, while anyone—from the youngest child to the stodgiest adult—can take pleasure in Finding Nemo or The Incredibles. The same cannot be said about each of the aforementioned Dreamworks cartoons, each seemingly deficient of any lasting emotional connection to the viewer.

Kung Fu Panda ends up being a lot of fun, which is no doubt all your children require. Colors pop with every ounce of iconography and imagination Chinese mysticism can muster. Intense animal battles offer surprising involvement. And the physical humor doesn’t overstay its welcome. Dreamworks is slowly elevating their company with every new film they release, needing only to attain the inexhaustible heart Pixar effortlessly achieves on each of their animated pictures before becoming their equal.