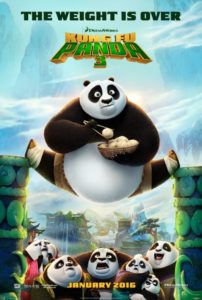 Kung Fu Panda 3 is bubbly, well-choreographed nonsense with a heart. Since the 2008 debut, DreamWorks Animation’s actionized series has prevailed using the same blueprint. Lovable, bulbous panda Po (enthusiastically voiced by Jack Black) somehow subsists with the mind of a child or moronic adult, yet performs incredible feats of martial arts wizardry—ever amazed and bewildered with his own skill. The so-called Dragon Warrior, Po is constantly being prophesied to stop evil, and despite his flawless track-record for distinguishing bad guys, he’s always surprised when a new master proclaims that Po is the only one who can save the day. And when the time comes, of course, Po achieves whatever’s expected of him and more, to which he observes, “Awesome!” Not that the formula doesn’t still work, but it’s all just a bit too predictable and tiresome.

Co-directors Jennifer Yuh Nelson (Kung Fu Panda 2) and Alessandro Carloni (an animator on the previous two) assemble another brightly colored production with this third entry, offering a number of diverse planes of existence and each with a unique animation style. Though, the directors are sometimes inconsistent in their application. Along with the cartoony photo-realism of the present, flashbacks have a watercolor look of fast and loose brushstrokes, while the movie’s training montages (there are at least three) take on an anime style. The movie opens with a prologue in the spirit realm, where Po’s original master, the wise tortoise Master Oogway (Randall Duk Kim), settles to find inner peace. But his rest is soon interrupted by Kai (J.K. Simmons), a yak warrior who once fought alongside Oogway but now steals the chi from various masters. Once he has them all, he can return to the mortal realm and face the Dragon Warrior who is prophesied to defeat him.

Back in the Valley of Peace in ancient China, Po learns from Master Shifu (Dustin Hoffman) that to truly become the Dragon Warrior, he must take over training the Furious Five—Tigress (Angelina Jolie), Mantis (Seth Rogen), Crane (David Cross), Monkey (Jackie Chan), and Viper (Lucy Liu). Knowing little about being an instructor, Po botches his first lesson and begins to doubt himself. His self-doubt increases when he meets his biological father Li (Bryan Cranston), whose sudden appearance causes a rift with his adoptive father, the noodling goose Mr. Ping (James Hong, excellent). Po resolves to follow Li to his secluded panda village where he learns the art of tumbling down hills and sleeping past Noon, all in an effort to learn the energized power of chi. Inevitably, Po must learn to once again discover himself in order to reconcile with his two fathers and, eventually, defeat Kai.

Cranston is a fine addition to the voice cast; his distinct touches make Li wounded yet caring. Simmons doesn’t make much impact as the sequel’s villain, certainly when compared to Gary Oldman’s rather scary turn as Shen from the darker and more engaging Kung Fu Panda 2. The rest of the voice cast does serviceable work, whereas the emotional foundation of this series has always rested on Black and Hong. Mr. Ping’s endearing nagging and food-smothering love never grow tiresome, until the finale when he and Li join fatherly forces, and armor, to help the lost village of pandas defend against Kai. Somehow, all conflicts are resolved by kicking and punching in the Kung Fu Panda movies, as opposed to, say, inner peace. But at least watching pandas twirl ribbon and bounce dumplings off their bellies mid-battle is entertaining. The entertainment stops during the last scene, where Po trains his fellow pandas to a silly, rewritten version of Carl Douglas’ “Kung Fu Fighting” song.

Overall, the animation arguably achieves the best looking of the three movies; however, Kung Fu Panda 3 is also the most inconsistently stylized. Occasionally during a training montage or fight sequence, the style changes from a real-world look to an almost geometric anime, and then back again without explanation. The cutting in several of the fight sequences and training montages also leaves the viewer’s head spinning, insomuch that there’s a lacking shot-for-shot logic. As for the story, plotting has never been the strong suit of the Kung Fu Panda series, and this third chapter is no different. It’s difficult to imagine where a sequel would go from here, given that Po ends up receiving an immense amount of power in the end. But considering this is DreamWorks’ longest running franchise next to the abominable Shrek and Madagascar movies, undoubtedly there will be more moves for Po to learn and more existential peace to gain.