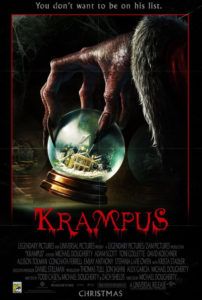 When the threat of coal isn’t enough to dissuade naughty behavior around Christmastime, watch out for the Krampus, a horned, goat-legged creature delivering punishment instead of presents to bad girls and boys. But the Krampus doesn’t just deprive misbehavers of gifts; he chains up wicked children, beats them with birch branches, throws them in the sack on his shoulder, and carries them down to Hell for punishment. One of the most frightening of all tales from folklore, the Krampus dates back to pre-Christian times in Germanic cultures and survives today, mostly as a lark, in eastern European countries like Austria. Given the terrifying nature of the story, it’s any wonder Hollywood hasn’t tapped the ripe material for a movie before. Those versed in Krampus legend, like myself, have to wait no longer for a Krampus feature.

Writer-director Michael Dougherty’s Krampus has arrived just in time for the 2015 holiday season. After co-scripting Bryan Singer’s X2: X-Men United (2003) and Superman Returns (2006), Dougherty wrote and directed his debut feature, the horror anthology Trick ‘r Treat in 2007—although, Warner Bros. delayed the theatrical release again and again before relegating it to a video debut. Nevertheless, strong reviews (86% on Rottentomatoes) and fan enthusiasm turned Trick ‘r Treat into an instant cult sensation, and talk of a sequel is underway. Dougherty returns to holiday horror with Krampus, a creepy horror-comedy with an equal balance of laughs and scares. Joe Dante’s Gremlins (1984) serves as an apparent tonal influence.

When Max finds he’s too fed up to cope, he rips up his letter to Santa, but his last-straw loss of the Christmas spirit incites some dark magic—a sudden blizzard, a power outage, and an ominous tone in his neighborhood. Things get creepy when Beth goes missing after braving the storm to check on her boyfriend. Tom and Howard try to find her, but discover evidence of something sinister—monsters under the snow. When they return home, sans Beth, the family learns what they’re in for: Max’s grandmother on Tom’s side, named Omi (Austrian actress Krista Stadler), explains about the Alpine legend of the Krampus in an eerie fireside story shown to the audience in stop-motion-looking animation. Except, Dougherty’s version of the Krampus comes supported by a group of Christmas-themed terrors: a fang-ridden teddy bear, mischievous gingerbread men, a winged demon doll, and, scariest of all, a large screeching Jack-in-the-Box with a taste for children.

As the families try to survive an onslaught of Christmas demons, the mostly CGI effects deliver the terror-ific proceedings with cartoonish fun; none of it is really scary, but it’s entertaining enough. The titular “shadow of Santa Claus” looks somewhat odd with his unmoving, locked-agape mouth (clearly a mask) and animated tongue. No matter, as most of the horror is dealt by Krampus’ snickering minions—particularly in a frenzied attic sequence. Cinematographer Jules O’Loughlin replicates the low visibility of snowstorms and cramped, flashlight- and fire-lit interiors, even if the action relies too much on close-ups and occasional over-editing by cutter John Axelrad. The screenplay co-written by Dougherty, Todd Casey, and Zach Shields has fun exploiting some obvious class wars between the two families early on, while later they need each other to survive. (And isn’t that the true meaning of Christmas?)

Unfortunately, Krampus embraces the standard Hollywood horror movie trope when it resorts to a last-minute twist. With a coda whose final shot amounts to 30 seconds of screentime (the specifics of which I will not spoil here), the movie at once abandons traditional Krampus lore and turns an enjoyable, spooky holiday tale into a disappointment. A fine cast and capable direction make Krampus diverting for the involving and slow-building first two-thirds, but once the bloodless, PG-13 body count piles up fast in the final third, the audience may lose interest. Strangely enough, Dougherty’s movie is best when it’s taking a cynical look at holiday celebrations, while the horror elements seem flat by comparison. It’s worth a watch for a change of mood away from the cheery holiday, but it doesn’t make use of its central monster well enough to do it onscreen justice, nor does it maintain its otherwise necessary sense of humor.