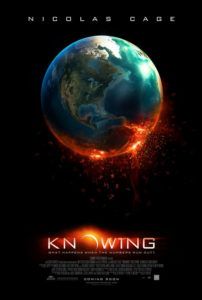 Reader Beware: Major plot points are discussed within this review. And while some viewers prefer to see a movie with the plot un-spoiled, this film is entertaining enough to work on style alone, and in fact, you may be more apt to enjoy the result pondering the themes in advance. So, purists take heed, but for those who appreciate that a film is more than the plot revealing itself, read on!) Alex Proyas’ Knowing presents a high-concept science fiction setting designed to consider the very essence of the universe. Are we all bound by some predetermined set of events playing out according to plan, or do we all exist because a random set of circumstances just-so-happened to occur? In the former case, we might question the point of trying if we have no chance at free will, whereas the latter case suggests the world is our playground. Simple idea for a movie, no?

Nicolas Cage plays MIT professor John Koestler, a devout believer that “shit happens” without reason. Of course, there are laws of physics and nature, but those do not inform the significance of life. Strange view, considering John’s estranged father is a pastor. We learn John’s wife died a year ago in a fire, and since then he’s vowed to see the world as unsystematic. This changes when his son Caleb (Chandler Canterbury) brings home a piece of paper, a chance selection from his school’s 50-year time capsule, showing seemingly unassigned numbers feverishly written in 1959 by a troubled child. John believes those numbers specify the dates, locations, and number of casualties for all major disasters over the last five decades.

At first, his theory about the numbers is just freaky, but then he’s proven correct when a plane crashes in front of him (a fantastically rendered sequence both scary and thrilling), killing the exact number of people at the exact location on the exact date specified by the paper. What scares him more is the last entry on the paper, which seems to indicate that The End of the World is coming in a few days. Meanwhile, ominous figures appear around John’s home, in shadows, whispering to Caleb. And other disasters come true, foretold by the piece of paper, destroying John’s impression of the world as he knows it.

Proyas uses familiar imagery from his previous films. Consider the faceless people seen by Caleb—they’re nearly identical in description to The Strangers from his wowing 1998 picture Dark City. Both figures dress in long black coats, have pale skin and dead eyes, and seem to float as they walk. And they both turn out to be aliens living inside a quasi-human shell. Does Proyas know something he’s not telling us? If we see someone fitting this description on the street, should we ask if they’re from another planet? Furthermore, the alien technologies appear similar, so given the plot of Dark City, this film might serve as an unofficial prequel.

Viewers will no doubt pick up Proyas’ subtle visual hints suggesting Yahweh is probably just an alien race misinterpreted as all powerful. The answers in the end imply that human life follows a set schematic, but the purpose of that plan remains in question. According to the movie, our plan is determined by aliens. What I’d like to know is how the aliens knew about the disasters. We can assume the natural-disaster-inspired Armageddon could be predicted by their futuristic instruments, but how about the plane crash, or the fire that killed John’s wife? Did the aliens cause these events? Or do their transparent, psychic brains have the ability to foresee the future? Even if there is no reasonable answer, what Proyas has done is create another entertaining and thought-provoking science-fiction film, and he remains one of the only filmmakers today seeking out the potential of this under-intellectualized genre.

Given the history of his productions, though, Knowing was an uphill battle. After Dark City, he went to Fox under studio head Tom Rothman to make I, Robot, an unapologetic commercial-of-a-film (Converse, anyone?) Proyas himself said became so because of Rothman’s inartistic meddling. Producing in partnership with Summit Entertainment, Proyas’ end product here works, feels coherent, and indeed lacks the artificial-ness of a market-driven studio film. The special effects for the disaster scenes should be praised for their gritty and horrible realness, but the CGI used to create the aliens and burning forest creatures looked like a videogame. What’s more, Marco Beltrami’s intense score was one of the best for a thriller in recent memory.

The film has problems, of course. Namely Cage, who, despite his recent string of filmic debacles guided by his hammy acting, fits nicely into his role and only offers one or two moments of typical Cage-like eccentricity. Still, his presence exudes a foul air, and makes me wonder if he can ever redeem himself for garbage like Bangkok Dangerous and The Wicker Man. His character takes a leap of faith it the finale by believing in an afterlife, when the film’s view seems to disprove determinism, at least in a godly form. The notion is inconsistent for the otherwise well structured plot.

If M. Night Shyamalan’s Signs is the Christian answer to science fiction, then Knowing serves agnostics with an escapist series of events leading to the justification of their belief in a higher power without resorting to the constraints of religion. It’s not a grand conceptualization of a visionary hypothesis like Blade Runner or Minority Report. Holes penetrate the story here and there, but it asks bold questions concerning human beings’ (mis)understanding about the world they occupy. The result should not be dismissed as an average thriller, and yet, seen in those terms it still succeeds, because Proyas is a superior director, and after several missteps he has finally redeemed himself with another fine piece of science fiction.