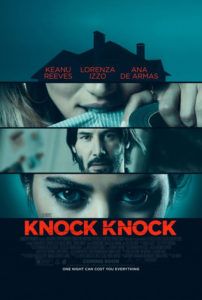 With his last film, The Green Inferno, writer-director Eli Roth emulated Italian horror maestros, Ruggero Deodato and Umberto Lenzi. Their respective gorefests Cannibal Holocaust and Cannibal Ferox set the foundation for Roth’s take on the cannibal subgenre. With his latest, a modest indie called Knock Knock, which debuts just a couple of weeks after The Green Inferno on VOD and in limited theatrical release, Roth draws from the 1977 cult favorite Death Game. That film starred Sondra Locke and Colleen Camp as two girls who seduce then proceed to torture a businessman while his family is away. Co-writing alongside Nicolás López and his frequent collaborator Guillermo Amoedo, Roth uses the same scenario and tries to deliver much titillation inside an intended satire, the purpose of which is edgeless and possibly nonexistent.

Fortunately, Roth has some star power behind his film, whereas usually he works with unknowns. Keanu Reeves plays Evan, a happily married architect with two children; they live in a sprawling, modern home in the hills outside of Los Angeles. Settled in for a weekend of catch-up work after a shoulder injury, Evan plans to stay home while his family goes to the beach house. He’s content to listen to tunes, work on his latest design project, and maybe smoke some weed. Just then, there’s a knock on his door, and two soaked young girls standing in the rain claim to have gotten lost while looking for a party. He reluctantly invites them in to wait for an Uber, leaving them 45 minutes to kill. They ask if their clothes might be put in the dryer, and before you know it, sexpots Genesis (Lorenza Izzo, Roth’s wife) and Bel (Ana de Armas) are naked under cushy white robes in Evan’s living room. If you’re rolling your eyes and thinking “Dear Penthouse Forum,” you’re not far off.

,It’s takes everything Evan has to remain a polite host, feeling awkward in the face of these two frisky girls, who quickly segue the small talk into their open sex lives. Admittedly, these early scenes are unnerving and fun, watching Evan squirm away and move to another chair to avoid their touchy-feely flirtations. He tries to remain loyal to his family, but when it’s time to go, the girls drop their robes and fall to their knees. Surprisingly, Roth shoots the ensuing threesome with some (relative) restraint, maintaining the tension of the situation over the exploitative possibilities. But all restraint is abandoned the next morning, when Evan wakes to find the girls now behaving like reckless delinquents, trashing his kitchen and house. Soon enough, he’s tied to a chair and the situation has much in common with Michael Haneke’s Funny Games (take your pick of his German-language original or English-language remake).

Determined to torment and threatening to kill Evan, the girls become vicious, overgrown children. Indeed, they claim to be underage and hint they’ve played this game with other family men before—they’re out to punish pedophiles by seducing them into a crime. It’s not exactly the soundest morality experiment (early on, they tell Evan they are flight attendants, so regardless of his infidelity, he assumed they were passed the age of consent). And their bonkers behavior proves so over-the-top and campy that it becomes difficult to have any consideration for their plan; likewise, they’re so absurd that they’re not genuinely scary, either. Often coolly reserved, Reeves expresses more frightened and desperate emotion here than in his last few performances combined, even if it descends into a funny tirade (“Fuck you, you bitches!” and so forth) during one scene. He’s an effective leading man and, his crime aside, the setup becomes so absurd and the girls so annoying that we cannot help but sympathize with him. Had the film represented the girls as more than just giggling psychos, they may have drawn our sympathy more.

From a technical perspective, this is Roth’s most accomplished film; the lensing by Antonio Quercia is worthy of note. But the film’s purpose is elusive at best. The writers (or someone more talented, like Brian De Palma) could have composed a slick cat-and-mouse thriller out of this scenario, but instead, they resolve to leave the girls in control and force Evan to endure seemingly endless suffering and humiliation during the second half. Although Knock Knock doesn’t tumble into bloody torture porn, with which Roth is familiar (see Hostel or Hostel: Part II, or don’t), the film doesn’t have a sound purpose for existing. Certainly, a more intelligent approach to this story could have had something to say about gender roles or sexism, or even the nature of poetic justice through physical punishment, but Roth’s lowest-common-denominator approach reduces a primal, campy idea into nothing more than a dull homage to an exploitation flick.