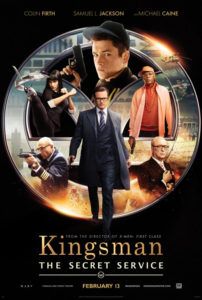 Kingsman: The Secret Service dishes up bloody catharsis for an audience disenchanted with both the world at large and the formulaic state of cinema. Based on Mark Millar and Dave Gibbons’ wicked 2012 comic book The Secret Service, this cynical and dark-humored spy yarn appeals most to anti-establishment enthusiasts. And yet, director Matthew Vaughn’s film also operates within an established genre, even while riffing on genre tropes and stereotypes. Kingsman‘s streak of self-aware humor and stylization are playful and fun, while its acerbic views on everything from corrupt politicians to familiar spy-thriller storylines feel fresh. All of this happens as it pushes boundaries of decency and taste in the most entertaining ways possible. Vaughn has proven himself an expert at adapting stories of such ilk, and here’s another one—a film that seems to belong on the comic’s page, but Vaughn brings it to the screen with a hilariously depraved edginess.

The film is also unique in that it makes a believable action hero out of Colin Firth, the Oscar-winning actor famous for his gentlemanly airs and Englishness. Firth plays the suave Harry Hart (codename: Galahad), a member of an ultra-clandestine superspy unit formed centuries ago by a group of upper-crust clothiers. Based out of an ordinary tailor’s shop on Savile Row, the team code-names themselves after Arthurian legend heroes, and their pointedly Anglophile characteristics manifest in the form of old Scotch, bulletproof couture, and high-tech weaponry disguised as everyday objects (umbrellas, lighters, pens, etc.). After one of Galahad’s colleagues is killed, he puts forth the council estate hooligan Eggsy (Taron Egerton) as a potential replacement, one of several recruits put through a rigorous, dangerous series of trials for the top prize: to occupy the codename “Lancelot.” Mark Strong’s gamesmaster Merlin and the resident Arthur, played by Michael Caine, watch as Eggsy, a smarter-than-average ruffian, vies against some snobby competition for a position within the Kingsman—an honor once held by Eggsy’s late father.

Meanwhile, powerful cyber-magnate Richmond Valentine (Samuel L. Jackson) uses his fortune to alleviate the Earth’s overpopulation problem, therein reducing the effects of man-made global warming. It’s a sympathetic aim to be sure, but his methods are pure megalomania: the lisping billionaire plans to give the world SIM cards for free internet and phone usage; but when he activates them, the cards will release a signal that sends its victims into a violent rage (think Stephen King’s Cell). With his razor-legged henchwoman Gazelle (Sofia Boutella) beside him, Valentine is a self-acknowledged classical Bond villain, while Galahad represents the debonair hero. How fitting that they have a tense exchange at Valentine’s posh home over a meal of Big Macs. More than one such exchange underlines this parallel, quite often to funny and defiant effect. In some ways, Kingsman follows the Bond formula to the letter; in others, it deviates with a vengeance. One moment of departure slaps you in the face so hard that it may take several minutes to recover from the blow.

In many ways, the film aligns perfectly with Vaughn’s career thus far. While borrowing the basic structure of classic James Bond films from the 1960s, it incorporates a youngsters-in-training element that recalls Vaughn’s enjoyable X-Men: First Class (2011), which was also set in the ’60s. And just as Vaughn’s adaptation of Millar’s Kick-Ass (2010) rethought the superhero film with a meta-centric edge, his adaptation of Millar’s source winks at Bond, then delivers him a firm knee to the balls. Kick-Ass and Kingsman each have a similarly deranged sense of humor that uses ridiculously violent escapism and knowing wit as stylized, rampantly post-modern entertainment. There’s a sequence where Galahad infiltrates a Kentucky church and must single-handedly take down the entire parish of aggressive white-trash bigots, which in itself contains a degree of catharsis. And Valentine’s evil scheme, for example, involves the cooperation of countless people in powerful positions, including a familiar rear profile of the current U.S. president. But each of Valentine’s supporters receives their due comeuppance during an applause-inducing, head-exploding sequence.

Beyond gory satire, there’s a surprising degree of referential humor to Kingsman that should not go unnoticed. Consider the scene where Galahad asks Eggsy if he’s seen Trading Places, Nikita, or Pretty Woman—because he wants to use them as an analogy to the kind of slob-made-snob story in which Eggsy now finds himself. Eggsy hasn’t seen those films, but when Galahad explains further, the boy responds, “Oh, like My Fair Lady!” Elsewhere, the film nods to Get Smart and the English television show, The Avengers (not to be confused with the Marvel property). No matter how over-the-top it gets during amped-up action sequences (where the film speed is enhanced and shots are digitally blended together to a delirious effect), there’s always a level of humor under the surface. What makes Vaughn’s treatment significant is that, in spite of the cartoony delivery, outrageous action, and satiric energy, the director manages to make us care about his characters.

But then, Kingsman is not a polished film. Some troublingly bad CGI accompanies action scenes, especially when animating fire and explosions, and Eggsy’s sudden preoccupation with anal sex late in the film seems to come out of nowhere. Also, there are plenty of unanswered questions in the script (credited to Vaughn and Jane Goldman), which feel as if they were left on the cutting room floor. For example, what happened to Gazelle’s legs that required them to be replaced by blades? Perhaps these are nitpicks best left ignored. After all, what Vaughn achieves is a cheeky and often reactionary film whose brutality is only matched by its smarts. Though it may move too fast and carry on too long (the third act drags) to have an enduring significance, the lively result uses a bloody paintbrush to smear the government (in fact, all governments), pop culture, and its own conventions into a wonderfully entertaining portrait.