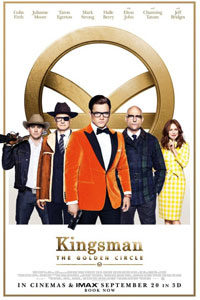 Kingsman: The Golden Circle functions on a level of cartoonish absurdity that tests its audience’s suspension of disbelief, while its length tests our bladders. At nearly two-and-a-half hours, director Matthew Vaughn’s self-indulgent blockbuster showcases futuristic spy technology that miraculously heals a gunshot to the brain; physics-defying stunts aboard an aerial tramway in Italy; a resurrected baddie with a cybernetic arm; a drug dealer based in Cambodia, who’s back-to-the-fifties Americana obsession is pointless; and perhaps most absurd of them all: British twentysomethings watching Fox News as they get high. (Why would British citizens watch Fox News over, say, the BBC News? And why would stoners be watching the news at all?) Indeed, the film’s most unbelievable conceit showcases the controversial cable news station as the world’s go-to source for updates when the human race faces doom. Undoubtedly, Fox News simply relied on their fellow Fox Entertainment Group subsidiary Twentieth Century Fox, the film’s distributor, to ensure their place on every news bulletin. As a result, the otherwise subversive and edgy franchise feels like a corporate product.

Vaughn’s 2015 Kingsman: The Secret Service, based on Mark Millar and Dave Gibbons’ comic, was no friend to realism. But that was the point. The director used its outlandish tone as an antidote to typical James Bond fare, delivering subversive and self-aware humor wrapped in deliriously shot action sequences of extreme violence. The film had its charms, largely newcomer Taron Egerton’s hooligan-turned-superspy Eggsy, and his My Fair Lady-esque transformation under the guidance of seasoned Kingsman, Harry Hart (Colin Firth)—a character who shockingly died just before the third act. Vaughn and Jane Goldman’s screenplay for The Golden Circle has none of its predecessor’s charisma or anarchic attitude, and what’s more spoiled its biggest twist—that Harry somehow survived his bullet to the brain—in the promotional campaign, rendering its potential emotional effect inert. The film suffers from a nasty case of sequelitis, whereby the follow-up has the same basic plot of its predecessor and makes the mistake of assuming the outcome of more action is a better film. It’s not.

From the first scene onward, The Golden Circle is a mess. In the initial moments, Eggsy steps out of the Kingsman tailor shop in London, one of the Secret Service’s many undercover command bases, only to find himself under attack by a robot-armed Charlie (Edward Holcroft), the flunked recruit from the original who, like Harry, seemingly died. As the opening sequence vomits out mostly computer-animated violence, the viewer experiences an early sense of dazed indifference to everything onscreen. Some would call it mind-numbing. It turns out an international drug magnate named Poppy (Julianne Moore, delightfully cheery) has targeted the Kingsman for destruction. After killing all but Eggsy and the tech wizard Merlin (Mark Strong), she reveals that her products (marijuana, cocaine, heroin, opium, etc.) have been laced with a poison that puts the user in a catatonic state before causing them to bleed out. Poppy agrees to release the antidote if the President of the United States (Bruce Greenwood) agrees to legalize and tax all drugs.

Eggsy and Merlin head to Kentucky to team up with their American superspy counterparts, the whiskey-peddling Statesman—a twang-inflected bunch clad in Stetsons and denim, armed with lassos and six-shooters, and each named after a drink. Headed by Champagne (Jeff Bridges, once again doing his now self-parodying Rooster Cogburn accent), the Statesman consist of the rowdy-but-dumb Tequila (Channing Tatum), the swaggering Whiskey (Pedro Pascal), and the undervalued techie Gingerale (Halle Berry). Once inside the Statesman’s underground lair, they find Harry, alive and kept in a padded room, with a patch over his eye and suffering from amnesia. While trying to track down Poppy and stop her evil plot at various points across the globe, Eggsy also tries to restore Harry’s memory. And all the while, it seems to take him mere minutes to travel from Kentucky to various locales around Europe, lending the film a confusing sense of time and space. Meanwhile, the President begins rounding-up Poppy’s catatonic victims, confining them in individual cages, and then stacking those cages inside a single stadium—an image realized with embarrassingly bad special FX.

The sequel has been overloaded with subplots and pointless asides, some of them incomplete or left with major gaps, suggesting either the writing was sloppy or the missing parts were cut in post-production. Take the persistent thread involving Eggsy’s girlfriend, the Swedish Princess Tilde (Hanna Alström), who once again promises him anal sex should he save the world. The scenario dreams up a romantic conflict when Eggsy calls Tilde to ask permission to penetrate a target’s “mucous membrane” to insert a tracking device, and somehow the discussion becomes a noncommittal proposal. Or consider how Poppy keeps Elton John prisoner in a private auditorium for her own entertainment. Rather than an amusing one-scene cameo, John remains a significant presence in the second half—even so, the filmmakers have relegated him as a device to shock the audience with his uses of “fuck” and kung fu acrobatics. (The pop star’s hits “The Bitch Is Back” and “Saturday Night’s All Right for Fighting” contribute more to our enjoyment of the film than his acting does.) All of this feels thrown together in the most haphazard of ways.

Curiously, the film also shares several characteristics with summer 2017’s Logan Lucky: both films star Channing Tatum; both feature a character who loses an arm; both seem to use the same bar setting, the earlier film called it the “Duct Tap Bar & Grill” and this one simply “Saloon”; and both showcase John Denver’s “Take Me Home, Country Roads” as an emotional crux. All of these similarities might be coincidences, except how often do any two films share one of these traits, much less all four? In any case, perhaps these comparisons are evidence of how the mind tends to wander during The Golden Circle. The protracted action sequences prove bloody and over-the-top, just as they were in The Secret Service, and the all-star cast makes the material seem better than it really is. Elsewhere, the abrasive score by Henry Jackman and Matthew Margeson often drowns out dialogue and certainly over-accentuates every beat of the story. Ultimately, Vaughn’s sequel repeats the most simplistic aspects of the original, replacing its satiric side with Fox News broadcasts. If The Secret Service equates to Sean Connery-level Bond, its sequel reaches the lowest Roger Moore-level entries of cheesiness.