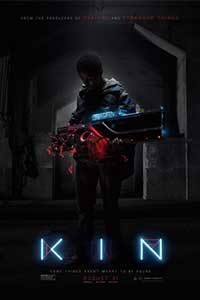 Kin might be the first episode in an extensive science-fiction series; though, all the genre’s sleek and shiny ornamentation has been left for the assumed sequels to this attempt at a franchise-starter. Directors Jonathan and Josh Baker, assembling a feature-length version of their 2014 short “Bag Man,” set their story, penned by screenwriter Daniel Casey, amid the forgotten remains of Detroit, along the American highway, and finally in a Las Vegas police station. The most out-there and compelling ideas in the film receive scarce attention. Rather than leave the audience wanting more, the filmmakers leave us unsatisfied. And in place of sci-fi spectacle, there’s a distracting concentration of cliché storylines: Kin is at once a road movie, a family drama about the bond between brothers, a seedy crime thriller, and a coming-of-age yarn in the Amblin tradition, although it does none of them very well. Still, it’s impossible to ignore the formal skill of the Baker brothers.

A pleasingly unusual blend of ideas, Kin follows a young African American teen, Eli (Myles Truitt), who spends his days getting into trouble at school or scraping metal from old, abandoned buildings. His adopted father, Hal (Dennis Quaid, carrying a strange underbite look), a widower, is hard on him, “because life isn’t easy.” Eli feels like an outsider, even in his own family. One day, while searching for copper and aluminum, Eli finds the remains of several helmeted, futuristic soldiers in armor. As one of them still has a few moments of life, Eli scatters, only to return the next day to find the soldiers gone. Any trace of them has disappeared, except a rectangular object that, when Eli touches it, takes the shape of a laser gun. Practicing in the mirror, Eli admires himself, doing Robert De Niro’s “You talkin’ to me?” routine with a massive weapon worthy of Cable from X-Men comics. Eli has found the one thing that makes him feel important (troublingly so).

Meanwhile, danger brews at home with the return of Hal’s biological son, Jimmy (Jack Reynor), fresh out of jail after several years. While inside, Jimmy received protection, and those services have left him with a debt of $60,000, owed to a local crime boss, Balik (James Franco). Unable to pay, Jimmy comes up with a solution that accidentally leads to the deaths of his father and Balik’s sadistic brother, Dutch (Gavin Fox). And so, Jimmy takes Eli on the lam with a plan to hide away at their family’s cottage in Lake Tahoe, while also fleeing from a revenge-hungry Balik. But also in pursuit are menacing, black-clad soldiers from who-knows-where, looking for the space-age gun Eli found, which, of course, comes in handy when Jimmy and Eli are cornered. Along the way, a stop at a small-town strip joint introduces them to Milly (Zoë Kravitz), a stripper-with-a-heart-of-gold who tags along for the ride.

Watching the film, the Bakers clearly have a handle on form and tone. Kin adopts an earthier, neon-tinged version of the David Fincher aesthetic, including dark scenes shot at night and a lovely, complex use of shadows. The cinematography by Larkin Seiple, who shot Jon Watt’s Cop Car (2015) and, early this year, Childish Gambino’s This Is America music video, gives the film a milky-black appearance. Also, the predominance of location shooting in Canada lends the production a sense of real-world authenticity, unlike the overproduced CGI worlds of your average summer blockbuster. Subtle, fascinating special FX help bring the mysterious gun to life, as its tactile physical presence is supported by a light show of unintelligible readouts, scopes, and eventual energy blasts. In the film’s last ten minutes, the most impressive effects piece—an awe-inspiring portal that looks like a crumbling hole of ice ripped through time and space—is among the most impressive effects of 2018.

Unfortunately, the best aspects of Kin come in small doses. Carrie Coon, perhaps the most talented performer in the cast, appears all-too-briefly at the climax as an overly understanding FBI agent. Michael B. Jordan, also an executive producer, makes a distracting cameo appearance. The origins of the laser gun, explained in a vomitous amount of exposition, leave us wanting more (but not in a good way). And while the performances by Truitt, Reynor, and Franco each lend the film character, the conventionality of the conflict, despite its sprinkling of sci-fi, is not enough to keep the audience engrossed. However innovative the combination of gritty urban realism and hi-tech weaponry may be, Kin is at its best when the Baker brothers engage in sharp and ruthless action, whereas the screenplay’s attempt to imbue the material with gravitas fails to create the requisite substance.