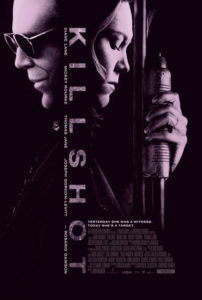 Killshot is a short diversionary entertainment that probably could’ve been something more, but wasn’t because of the general lack of effort and disrespect for the moviegoing public by Bob and Harvey Weinstein of The Weinstein Company. The former heads of Miramax have gotten into the bad habit of losing interest in projects after poor test screenings, at which point they allow uncountable editors to attempt to “improve” material. When this inevitably fails, the product is shelved for a time, and then eventually released with either half-assed marketing or none at all. This film falls into the latter category.

Based on the novel by Get Shorty and Out of Sight writer Elmore Leonard, the story involves similar themes of cool hitmen, old-time crooks, and down-and-out hoods all trying to make it. Their sometimes labyrinthine interactions make the clichés throughout seem interesting, while Leonard’s pulpy, realistic dialogue usually makes up for the rest. And like those book-to-film adaptations, Killshot boast some notable celebrities and impressive talent behind the camera. It’s even apologetically enjoyable as rainy day amusement.

In one of those twisting, convoluted plot developments not worth explaining within this review, ex-steelworker Wayne (Thomas Jane) and his estranged wife Carmen (Diane Lane) eye Toronto mob hitman Armand “Blackbird” Degas (Mickey Rourke) and his Elvis-wannabe lout Richie Nix (Joseph Gordon Levitt). Just seeing them means curtains for the unhappy couple, who are trying to work through a trial-separation that he doesn’t want and she can’t explain. When they’re targeted by the killer duo, the couple is forced to live together in witness protection.

Carmen’s problem with Wayne is never really made clear. He seems like a nice-enough fella. After all, he’s Tom Jane, and how can anyone compete with that? But inexplicably she doesn’t want him back and refuses to try. That we never learn the exact cause of Carmen’s beef with her husband remains the key plot hole, and the central reason we’re emotionally distant from these characters. Fortunately, the star-power of Diane Lane and Thomas Jane creates the false yet entirely watchable sense of substance where there is none.

Meanwhile, Blackbird, a Native American who’s strayed from the ways of his reservation to become an assassin-for-hire, lives by a strict code that says no loose ends. And yet, he joins with unpredictable upstart Nix because the wild-child evokes his dead brother. Rourke lends his gruff role some needed gravitas, whereas Gordon-Levitt’s performance could be called overacting, but instead is appropriately annoying. By the way the story plays out, he’s meant to aggravate and irritate, if only for that sense of satisfaction the audience feels when he gets his comeuppance. Blackbird finds himself in-too-deep, as he begins to actually care for Nix’s trashy girlfriend (Rosario Dawson) and realizes he’s losing his edge.

Shakespeare in Love director John Madden unravels his yarn without much finesse or style, which is just how screenwriter Hossein Amini (The Wings of the Dove) spun it. Involving on a basic level where we’d prefer the central characters weren’t killed, the movie feels chopped-up with motivations suspiciously absent and background stories altogether missing. Entire characters were removed (including one played by Johnny Knoxville) during the long post-production process in an attempt to streamline the story, but the deficient sense of purpose leaves the simplified structure feeling detached.

Production began late in 2005 and finished mid-2006. Due to poor test reactions and the resulting delays, the Weinsteins left Killshot to gather dust until January 2009. All-but-nonexistent, the film’s distribution reached only a handful of theaters across the country, though critics were not allowed to screen the film. Probably banking on Rourke’s buzz from his comeback role in The Wrestler, the uncommitted release was barely an attempt; even the recent DVD release earned more marketing. But this is standard Weinstein behavior. Nothing new or remarkable about it. Examples ranging from The Brothers Grimm to Grindhouse detail hefty budgets and visionary directors trumped by the Weinsteins’ bureaucratic influence, doubt in their audience, and lack of consideration for the film they’re releasing.

So while Killshot might not have earned any awards or garnered much at the box-office attention, it certainly deserved better than to be dumped on the direct-to-video wayside. Advertise the cast, build-up the “from the writer of Get Shorty and Out of Sight” angle, and the Weinsteins might have made themselves a few million in theaters on celebrity name recognition alone. Apparently a few million wasn’t worth their time, which is the worst kind of show business logic out there. Prove them wrong. Rent this movie.