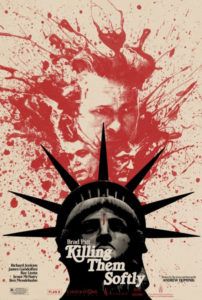 Before he became an author of crime fiction, George V. Higgins served as a professor, lawyer, and in various governmental positions where he investigated organized crime. As a result, his subsequent writing became renowned for his dialogue’s authenticity in lengthy and gritty conversations between wiseguys and lowlifes. This is readily apparent in his first novel, The Friends of Eddie Coyle, which made an excellent 1973 film starring Robert Mitchum, and also Killing Them Softly, Australian writer-director Andrew Dominik’s adaptation of Higgins’ third novel from 1974, originally called Cogan’s Trade. In rediscovering Higgins’ crime stories, Dominik has made an instant American crime classic that also boasts cutting political overtones. Updated from the author’s 1970s-set Boston crime circles and repositioned within post-Katrina New Orleans in 2008, Dominik’s film of lusciously staged violence and absorbingly protracted exchanges of dialogue contains a commentary that might dismay the unyieldingly patriotic, but nonetheless makes a significant mark on the crime genre.

Dominik, the Australian filmmaker behind 2000’s Chopper and 2007’s exceptional The Assassination of Jesse James by the Coward Robert Ford, presents an underworld inspection that could just as easily serve as a look into the false sense of community and economic corruption in America. The story opens with offenders Frankie (Scoot McNairy) and the wretched Russell (Ben Mendelsohn) meeting with Squirrel (Vincent Curatola), a washed-up veteran with a scheme and in need of two low-level crooks. They’re to raid a regular illegal card game run by Markie Trattman (Ray Liotta), and no one should suspect them because Markie once robbed his own game and got away with it. Everyone turned a blind eye the first time, although now, when Frankie and Russell hold up Markie’s players, his criminal clientele will assume he’s gone too far and robbed his own game for a second time. But after the successful heist, the “corporate” mob sends Jackie Cogan (Brad Pitt) to assess the circumstances and restore order, his preparations requiring approval from a higher authority communicated through a middleman mob spokesman (Richard Jenkins).

Though everyone supposes (correctly) that Markie wouldn’t be stupid enough to rob his own game twice, Markie receives a nasty and needless beating just to maintain face—needless because Jackie knows they’ll ask him to kill Markie eventually anyway, so why put him through the agony of physical punishment? To help with the cleanup, Jackie enlists the heavy-drinking, hard-whoring, out-of-his-prime hitman Mickey (James Gandolfini) to assist with taking out the sweaty smack-head Russell, whose acquaintance with Jackie would complicate his execution. Mickey’s the kind of unrelenting hard case where you get the sense that if Russell knew Mickey, it wouldn’t matter to Mickey one bit. The scenes between Pitt and Gandolfini stand on their own as brilliantly isolated and complex, with Mickey spewing out his angry-at-the-world bile in wonderfully acted monologues as courteous Jackie waits in calm disbelief and hushed frustration. Pitt’s pure onscreen magnetism accounts for the power of his role.

Dominik arranges Killing Them Softly like a Quentin Tarantino film, with involved, lovingly long sequences of rich dialogue interrupted by occasional smatterings of plot and extreme bloody violence. Like Tarantino, Dominik’s style might be considered self-indulgent if it weren’t for his film being so intelligent and expertly crafted. Every moment demonstrates Dominik’s directorial acumen, his use of slow-motion and a stellar soundtrack making the film, in a sense, an exercise in a controlled style. One execution, shown in super-slow-mo, features raindrops easing down-screen and crashing into the discharged shells from an automatic pistol; as the bullets penetrate a car window, glass and the victim’s head burst, shattering in imagery both startling and somehow beautiful. In another sequence, Russell’s fuzzy heroin-nodding consciousness blurs his sound and vision into a shrinking tunnel of comically skewed perceptions. Set to a blend of old-timey 1930s hits and the more modern cool of Johnny Cash and The Velvet Underground, the film’s atmosphere permeates with the same stylized self-assurance that makes crime pictures by Brian De Palma (The Untouchables, Carlito’s Way) or Danny Boyle (Shallow Grave, Trainspotting) so masterful.

In the background are talk radio and cable newscasts jabbering on about America’s economic crisis, and presidential candidate Barack Obama makes optimistic speeches about American unity. There are mainline analogies at work, such as Markie being the single corrupt bank taking the fall for a broken institution after George W. Bush’s administration deregulates home loans, which is equivalent to robbery from crooks here. But not every character represents a political figure or aspect of American economics. Rather than a small-time crime syndicate signifying America, consider instead the reflectivity of American politics, economics, and crime as universally corrupt equivalents in a negligent capitalist society. Dominik’s inclusion of television and radio commentary in the background cannot be overlooked; it’s openly apparent in the story’s setting and a thematic linchpin until it works its way into the foreground in the last scene. A final conversation between Pitt and Jenkins occurs where, after attacking Thomas Jefferson’s hypocrisy, Pitt delivers a brutal last line in a monologue bound to be quoted from here on out.

In another way, Killing Them Softly is less a portrait of American capitalism than a contention about an American attitude that prevails up and down, from The Powers That Be to the lowest common denominators like Frankie and Russell. “I live in America,” says Jackie. “And in America, you’re on your own.” Smart ones like Jackie know that for most to live in America is about survival, and to survive in such an environment, you must jealously play the game, but play it carefully. Some, like Jenkins’ character, find themselves caught up in the American Dream, whereas Mickey loses sight of himself in the widespread excesses available to those who achieve said Dream. Dominik has made a sly motion picture filled with style and substance, and one of the best crime pictures in recent memory. Although it’s bound to be divisive for its unconventional structure, ruthless tone, and the cynical nature of its message, Killing Them Softly is a rare, exceedingly enjoyable, bleakly comic noir story that also happens to have strains of something more.