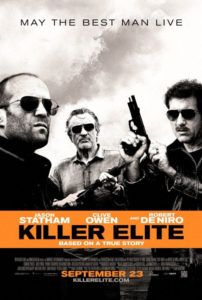 You wouldn’t know it from watching Killer Elite, but there’s an interesting and complex backstory that takes place in the grey zone of international espionage surrounding the film’s characters, all based on “factional” ones from The Feather Men, a 1991 novel by Sir Ranulph Fiennes. Members of Britain’s Special Air Service were situated in the Arab state Oman during the 1970s to combat Soviet-funded communist forces from East Germany stationed in Yemen. First-time screenwriter Matt Sherring ignores why the SAS was in Oman, however, and paints a black-and-white picture with the black-ops Brits as slaughterers and their war crimes the stuff of action movie villainy. Fortunately, Jason Statham arrives to punch and kick and shoot everyone, regardless of nationality or politics, making the reasons all but pointless. In other words, take the “based on a true story” title with a grain of salt.

The story begins in Mexico around 1980, where hired guns Danny (Statham) and Hunter (Robert De Niro) take down a dignitary’s motorcade. But when Danny can’t finish the job after the target’s young daughter appears in the caravan, he decides it’s time to retire. Cut to a couple years later, when Danny has disappeared to an Australian country house with his newfound girlfriend, Anne (Chuck star Yvonne Strahovski). He receives word from his former mercenary handler (Adewale Akinnuoye-Agbaje) that Hunter is being held by an Oman sheikh. Danny comes out of retirement to help his ex-partner and learns from the sheikh that the SAS killed three of the sheikh’s four sons in Oman. Disgraced by this, the sheikh’s people will not let him return home until the wrongdoers are dead. To get Hunter released from the sheikh’s custody, Danny must not only kill the three SAS men responsible for the death of the sheik’s sons, but acquire taped confessions.

Danny quickly hops a plane to England where he recruits two fellow mercs—muscle Davies (Dominic Purcell) and tech-wiz Meier (Aden Young)—and together, the trio proceeds to systematically case and execute the SAS men responsible. But Danny’s plan has alerted ex-SAS operative Spike (Clive Owen) to their presence, leading to a series of cat-and-mouse setups that prove to be more actionized violence than twisting, clever spy games. As a result, Statham and Owen have plenty of opportunities for over-edited shootouts and hand-to-hand bouts, all exciting in a very unimposing way. Meanwhile, first-time director Gary McKendry intercuts flashbacks into Danny’s past and his initial time with Anne, providing an unnecessary interruption in the action to convey phony and manipulative emotional motivation for Danny to survive the ordeal. If it’s one thing fans of Statham’s square-jawed brand of testosterone do not require, it’s a superficial love story to justify his character kicking butt all over the screen.

As Statham and Owen duke it out, De Niro’s character spends most of the runtime in captivity. This is unfortunate, since De Niro’s Hunter, while being the least defined character, is also the chummiest guy onscreen. The dour Statham and Owen are so concerned with being badasses that they forget to add dimension to their performances. Of course, these actors are so well versed in badassery that their characters’ absent depth doesn’t much matter when the action takes over. The supporting cast lacks big enough names to keep them interesting; casting actors more instantly recognizable to the audience may have enhanced the experience, turning it into something more akin to Ronin, another fast-paced tale of espionage and hitmen. But the film instead gambles that Statham and Owen will be enough, and in the end they just barely get the job done.

With credibility that exceeds your average Jason Statham fare, Killer Elite boasts two A-list performers (De Niro and Owen) and one B-grade star (Statham) in a B-movie that wants to be an A. Plenty of modern day parallels exist to elevate this period piece about espionage and oil-driven conflicts beyond mere action movie status, with opening titles that intentionally outline the situation to sound like a contemporary story. Alas, Kendry and Sherring relinquish any such notion as the story proceeds to focus on its malleability into a Stathamized shoot-em-up. Much like The Bank Job, a compelling real-life tale relies on tired clichés to guide the audience through by glossing over the fascinating details for mindless thrills. Taking the film as an adaptation of a book or Hollywood’s version of a true story, it leaves much to be desired; but Killer Elite is more involving that your usual Statham drivel and certainly deserves attention outside of his usual fanbase.