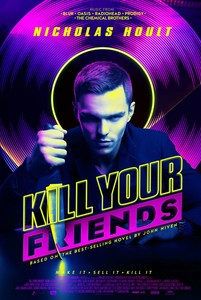 First-time feature director Owen Harris attempts to channel Danny Boyle’s energy in Kill Your Friends, based on Scottish author John Niven’s novel from 2008. Niven’s post-American Psycho riff on the music industry contains the same acerbic language and vivid imagery as Bret Easton Ellis’ 1991 cult-classical text, and a protagonist just as despicable and murderous. But the line between dark satire and just mean-spirited nihilism, delicate as it is, feels crossed in Harris’ otherwise technically capable hands. Kill Your Friends looks slick and contains a handful of inspired moments, many of them due to star Nicholas Hoult’s fine performance; however, the limited appeal excludes most of the audience, whereas similar fare like Fight Club and Trainspotting brought us together.

Hoult has come a long way since About a Boy. But there’s nothing boyish about his Steven Stelfox, except perhaps the character’s tendency to act like a troubled teenager, and his seemingly all-encompassing, never-justified anger at the world. Steven works for a record company called Unigram Records as an A&R man, meaning Artists and Repertoire, or talent scout. Though, he’s not particularly motivated by music or musicians. “Do these look like the shoes of someone who gives a fuck about the Velvet Underground?” he asks in his persistent voiceover. Steven also doesn’t seem to care about his salary, and he remains only marginally interested in sex. And yet, Steven takes advancement in his job very seriously—but it’s anyone’s guess why, since he hates everything about what he does, except for its cutthroat nature.

The film is set in the Britpop days of the mid-1990s in England, long before today’s indie music renaissance, around the time Oasis just debuted, Radiohead topped the charts, and the Spice Girls craze had not yet fizzled out. Niven’s screenplay, adapted from his book, engages in fourth-wall-breaking speeches and ongoing narration from Steven, but the character’s talking does little to explain who he is, aside from ruthlessly ambitious. In the first scene, we see Steven vacuum rows of cocaine up his nose and then attempt to overdose his friend and colleague Waters (James Corden). And when Waters collapses from an overdose, Steven urinates on him—all because he wants Waters’ job. The next day, Steven is stunned to see Waters show up for work, having apparently snapped out of his overdosed stupor sometime in the night. So Steven strangles him.

Scenes of epic drug use and various other debaucheries send Steven leaping from one horrid situation in the music industry to the next, always spouting his harsh commentary (he describes one song as “the biggest insult to humanity since the Nazis cooed over the blueprints to Auschwitz”). In the first half, Steven is forced to manage a popular artist named Rage (Osy Ikhile), whose second “experimental” album has cost the studio hundreds of thousands; he makes a desperate song purchase from a sleazy German dance producer (Moritz Bleibtreu); and he signs a talentless group of trashy, untalented lady singers. Later, he must contend with a smart executive rival (Tom Riley), an equally ambitious secretary (Georgia King), and a nosy detective (Edward Hogg) questioning him about Waters’ death. All the while, Steven’s sole moment of remorse comes when he weeps watching Radiohead’s music video for “Karma Police”—an obvious choice.

Niven based his book on his own experiences as an A&R executive, lending to Steven’s acid-tongued assessments about the ineffectualness of the industry and its eat-or-be-eaten environment (“Failure is a lonely rapist hiding in the bushes,” Steven says). Of course, with the emergence of countless downloadable platforms from iTunes to Spotify to Napster, a large portion of Steven’s world does not exist today. That makes his turn as a murderer all the more ironic, even if the film doesn’t acknowledge as much. Tonally, Kill Your Friends doesn’t manage to be either funny or horrifying in its application of satire. It simply becomes more outrageous, bloody, and graphic as the extreme second half takes over and the overarching metaphor becomes transparent.

The production looks good. Bill Smedley delivers sharp lensing composed of clean, smartly framed images. Junkie XL provides some original electronic music, while Rich Robinson supervises the best soundtrack in recent memory (consisting of Blur, The Chemical Brothers, Echo and the Bunnymen, Elastica, and Pulp, to name just a few). Hoult is effective as a pale-eyed creep, lending Steven what small amount of charm the character is capable of. But overall, Kill Your Friends is a thankless experience that doesn’t have much to say beyond the way it chooses to communicate its message. Musicheads may endear themselves to the material and call it “our Trainspotting”, but the film is far less original and less dynamic than the pictures it’s attempting to be.