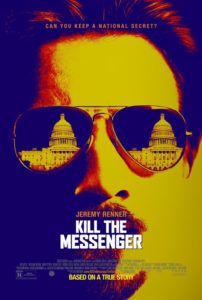 If Bob Woodward and Carl Bernstein had been family men while breaking the Watergate scandal, and they were later consumed by the blowback, then All the President’s Men might have ended more like Kill the Messenger. The film is based on late investigative reporter Gary Webb’s breaking story about the CIA funding a political revolution by starting a drug war. According to his story, the CIA funded the Nicaraguan Contras by siphoning funds from drug dealers they allowed to pump crack-cocaine into American neighborhoods, namely South Central Los Angeles. And because it follows Webb’s personal life as much as his story’s controversy, Kill the Messenger walks many lines. Foremost, it’s a cautionary tale about the limits of professional integrity and the dangers of crusader journalism. But it also contains elements of a charged political thriller and a character study of Webb, who supposedly committed suicide in 2004.

Webb is played by Jeremy Renner in the actor’s most well-rounded performance since The Hurt Locker. A sort of suburban hippie who smokes grass, rides motorcycles, and pursues the truth, Webb is also a family man with a wife, Sue (Rosemarie DeWitt), two sons, and a daughter. While working for the San Jose Mercury News in the mid-1990s, Webb investigates how, when the DEA takes down a suspected drug dealer, they seize the suspect’s property and keep it regardless of a conviction. When his story breaks, Webb is contacted by the flirtatious Coral (Paz Vega), who passes him a confidential CIA file that exposes Nicaraguan drug trafficker Danilo Blandon (Yul Vazquez) as an informant. Webb connects the dots with an attorney (Tim Blake Nelson) for the biggest crack dealer in L.A., “Freeway” Ricky Ross (Michael Kenneth Williams), whose supplier was Blandon. When this leads to a government prosecutor (Barry Pepper) dropping a high-profile case in fear of exposing this secret, Webb knows he’s on to something.

With the approval of his editor (Mary Elizabeth Winstead) and publisher (Oliver Platt), Webb heads to Central America for an interview with imprisoned drug lord Norwin Meneses (Andy Garcia), who confirms Webb’s suspicions that the CIA funded the Contras through the sale of drugs in the USA. But before publishing his eventual story, Webb receives a nervy warning from a National Security Counsel member (Michael Sheen) who warns, “You have no idea what you’re getting into.” But Webb is too invested in the truth to take heed. His story called “Dark Alliance” goes viral and earns him attention throughout various media outlets, many of whom are furious that they didn’t break the story first. But before long, the media begins to make accusations that Webb’s piece was under-researched and even wrong. Webb is convinced the CIA has engineered the backlash, but the fact that Webb’s sources are mostly drug dealers and criminals, but no one official, doesn’t help his case.

The screenplay by Peter Landesman hints that Webb’s reporting may have been messy or his facts unconfirmed, whereas we never receive confirmation one way or the other. Kill the Messenger feels afraid to have a position on its subject and delves into the much easier territory of dramatizing Webb’s personal life. With his small paper unable to manage the national upset, they contain the situation, quiet Webb, and as a result, his personal and professional lives gradually fall apart. Before long, he’s living in a shoddy hotel room and writing dull public interest stories. Renner, whose performance saves the entire picture from being a somewhat overly familiar exercise, enhances everything onscreen. Also, several supporting players make effective one-scene cameos, including those by Garcia, Sheen, Williams, Ray Liotta, and Robert Patrick.

By the time the film is over and Webb’s suicide is acknowledged via titles in the epilogue, it’s implied that the conspiracy Webb unveiled may have consumed him, and perhaps made him a target. Indeed, there’s plenty of speculation out there suggesting Webb was assassinated by the CIA. Cuesta’s film doesn’t bring that connection to the forefront, but the impression left on the viewer is that Webb wasn’t the ‘suicide type’. Moreover, his story was later validated by a 400-page CIA document that confirmed the connections between the CIA, the Contras, and crack-cocaine importers. But the CIA was clever enough to make the document public during the Bill Clinton/Monica Lewinski sex scandal, and so it was overlooked—if not completely avoided by certain media outlets. And since the film avoids showing these crucial details about the later part of Webb’s life, the story that appears onscreen seems frustratingly incomplete.

Another 15-20 minutes focusing on what are certainly the most enraging aspects of Webb’s story would have been the film’s smoking gun. Instead, Kill the Messenger feels curiously neutered. The sources of Landesman’s script, Nick Schou’s book Kill the Messenger and Webb’s own article “Dark Alliance,” have been sufficiently dramatized, but there’s not a lasting sense of injustice when it’s over. Cuesta, whose film credits are less impressive than his producer-director credits on television’s Six Feet Under, Homeland, and Dexter, applies a reasonable amount of handheld camerawork thanks to the director of photography Sean Bobbitt. However, the fine technical merits of Cuesta’s film, along with the standout performances by the cast, fail to create a sense of urgency about a subject that should have been a much larger scandal.