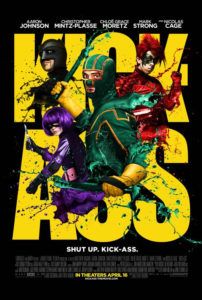 Given the safe, PG-13 rated tenor of most superhero movies today, something offbeat (and R-rated) like Kick-Ass comes as a shock, albeit a welcome one. Not only does the film offer up bloody violence, foul language, and an outlandish sense of humor in abundance, but it also mixes enough genres together to make their successful interplay something to admire. Themes of love, family, and revenge set the stage for a profusion of superhero action, all very ridiculous but also aware of its own absurdity. Based on the comic book by Mark Millar (creator of Wanted), and directed by Matthew Vaughn, this extreme frenzy-of-a-movie pulls no punches and leaves the viewer craving more.

Appealing to its target audience by making the protagonist one of them, the story speaks to fanboys galore through Dave Lizewski (Aaron Johnson), a comic-book nerd. Dave is your average high-schooler, lacking any tragedy in his life that might otherwise inspire his transformation into a masked hero. Dave simply thinks being a superhero would be cool, and that possibly he could inspire people to break out of their complacency and help their fellow human beings. So after some shopping online, Dave finds himself in the mirror wearing green spandex, waving bludgeoning batons as weapons. Without much training, he takes to the streets and his first mission sends him to the hospital. But it seems to be destiny, because his recovery leaves him with metal-plated bones and damaged nerve endings so he’s unable to register pain. This makeshift super-power inspires him to give superheroing a second try. When he stops a beating by dishing out some green justice, the event is recorded by an onlooker, and he becomes a YouTube sensation. Suddenly everyone loves Kick-Ass, his chosen moniker.

Meanwhile, Damon Macready (Nicolas Cage), an ex-cop-gone-mad, teaches his 10-year-old daughter Mindy (Chloe Moretz) the ways of vigilantism. We first meet them when he’s teaching her how to take a bullet. Very lovingly, he shoots her in the chest with a live round, which is absorbed by her bullet-proof vest. Afterward, he takes her for ice cream. In costume, Damon and Mindy become Big Daddy and Hit-Girl, two unrelenting, kill crazed heroes hunting the town’s top mob boss, Frank D’Amico (Mark Strong), who was responsible for the death of Damon’s wife, Mindy’s mother. D’Amico’s dorky son, Chris (Christopher Mintz-Plasse), wants to be a superhero too, though that conflicts with his desire to follow in dad’s footsteps as a ruthless crime lord. By the finale, the superheroes are teaming up to bring down D’Amico and dealing with their emotional baggage during the fight.

Hindered only by the ever-present and sometimes over-explanatory narration, what progresses could be called a spoof or caricature or even realism, or possibly it’s a combination of all three. However you define it, director Vaughn handles the tone perfectly. A film like this either works or falls flat on its face, and this filmmaker has succeeded making sheer lunacy seem kinda great. When there’s a pre-teen girl bouncing about a room with heavy weaponry and leaving a pile of bodies behind her, there’s bound to be some curious reactions. Frequent producer for Guy Ritchie, Vaughn made his directing debut with a smart crime-thriller from 2004 called Layer Cake. And just as he did with his second feature, Stardust, Vaughn never fails here in combing a post-modern barrage of ideas into one solid narrative. The humor is funny when it’s supposed to be, the mild drama is present when needed, and the action scenes are amped-up to a wonderful level of preposterousness.

There’s some controversy over the representation of Hit-Girl, specifically because of Roger Ebert’s harsh review that takes aim at the film’s representation of violence as it relates to a 10-year-old, both in terms of the character and the young actress playing her. This is coming from the same once-progressive film critic that defended Martin Scorsese’s casting of a teen Jodie Foster as a hooker in Taxi Driver, or who defended Brooke Shields’ appearance as a 12-year-old prostitute in Louis Malle’s Pretty Baby. It seems representing underage sexuality is fine in Ebert’s book, but very obviously exaggerated violence involving pre-teens is inappropriate. In my book, there’s no difference between sexuality and violence in the movies; they should both be censored equally by the MPAA, and when underage actors perform in such scenes, not to worry, because they’re professionals. As for children seeing the movie and copying what they see, that’s a parental responsibility and has nothing to do with my assessment of the film from a critical perspective.

This film considers a comic book world wherein superheroes aren’t real, and, because the story works by comic book rules, “the real” characters are able to defy logic. As a result, rules are broken to a staggering and shocking degree. Some will consider it deplorable. Others will see it’s not meant to be taken as a straightforward superhero film. Part satire, part realism, but entirely silly and exaggerated for entertainment value, Kick-Ass should not be viewed by those without a sense of humor, or a serious devotion to the world of superheroes. This film is for viewers who will appreciate Vaughn’s winks to Spider-Man, or Cage’s channeling of Adam West’s Batman in his rendering of Big Daddy. This film is for viewers who love the ideas behind comic books and superheroes, whether they’re real, not real, or something in-between.