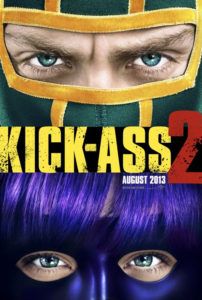 In Kick-Ass 2, the meta-centric comic style of 2010’s entertaining Kick-Ass has been preserved, but writer-director Jeff Wadlow and producer Matthew Vaughn mine darker territory to damaging effect. Based on the comics by Mark Millar and John Romita, Jr., the sequel follows the example set by The Dark Knight to frustratingly close extremes by sharing a number of parallel story components with Christopher Nolan’s film: Kick-Ass 2 features a sadistic villain capable of unbridled cruelty, not unlike the Joker; the heroes Kick-Ass, Hit-Girl, and the Red Mist all have daddy issues galore, a standard theme in any Batman story; the former and latter two each lose someone very dear, setting them both off, not unlike the death of Rachel Dawes; the heroes question whether they’re doing more harm than good; and when it’s all over, the film’s true superhero rides off on a motorcycle, vowing never to put on the mask again. It’s all very familiar, yet presented in the parodic manner of its predecessor.

Sometime after the events in the first film, Dave Lizewski, aka Kick-Ass (Aaron Taylor-Johnson) has resumed a normal life, as other homemade superheroes like Dr. Gravity (Donald Faison) and Night Bitch (Lindy Booth) have taken over in his place to protect New York City. Though Dave’s friend Mindy Macready aka Hit-Girl (Chloë Grace Moretz), still patrols, her guardian, Detective Marcus Williams (Morris Chestnut), finds her out and makes her promise never to don the garb of her alter-ego again. Devoted to Det. Williams, after a promise she made in her father’s name, she agrees and resumes normal high-school life. At the same time, Dave is bored with a normal life and puts his costume back on to develop a superhero team led by ex-mob-enforcer-turned-masked-vigilante Colonel Stars and Stripes (Jim Carrey). He’ll need a superhero team, too, as the former Red Mist, Chris D’Amico (Christopher Mintz-Plasse), has gone insane and vowed revenge on Kick-Ass for killing his father, and he uses his family fortune to become the first real supervillain, named The Motherfucker.

Some of the film’s most relatable scenes involve Mindy in high school, forced to deal with a threesome of social elitists. There are even a few minutes where it seems like Mindy might integrate into the “cool crowd”, until the film ventures down the path of Carrie (the remake of which stars Moretz), and Mindy realizes the teenage girl is her costume and Hit-Girl is her true identity—a recurring theme in the film for its heroes. Meanwhile, The Motherfucker develops his evil persona with an S&M costume constructed from his parents’ sex toys and hires countless goons to form a supervillain army to systematically take out Kick-Ass’ newly formed team. Mintz-Plasse is so wildly over-the-top as a scrawny, whiny villain; at times, it’s funny, other times, it’s just grating. The villain’s plan isn’t funny at all, however. This superhero comedy quickly takes a dark turn and becomes disturbingly grim, the violence unsettling and the tonal shift from laughs to sadism jarring.

Ever leaping over the boundaries of good taste and restraint, this is a crude, violent, mean-spirited, and vulgar film that goes off in too many tangential directions. Wadlow—whose previous works include a lame The Karate Kid rip-off called Never Back Down (2008) and the serial killer yarn Cry Wolf (2005)—incorporates base humor and excessive violence to draw the viewer’s attention. Such stimulation makes it hard to look away but difficult to watch. In one scene, the film falls flat when it tries to make a joke out of rape as The Motherfucker plans to force himself on Kick-Ass’ girlfriend, but he’s suddenly struck with impotence. Another sequence features Mindy causing her high-school bullies to stream geysers of vomit and diarrhea in a stroke of gross-out humor. Wadlow’s shaky-cam violence is brutal and bloody, earning its R-rating, and the language is almost always base. Hit-Girl and The Motherfucker are characters defined by their foul-mouthed quips. But then, this entire film is an exercise in pushing boundaries, often in a bad way. (Note: Another boundary pushed involves a romantic subplot involving Kick-Ass and Hit-Girl, between the 23-year-old Taylor-Johnson and 16-year-old Moretz.)

The viewer of Kick-Ass 2 feels nothing short of over-stimulated. Even the story tests our limits by pulling Dave in a dozen directions, from pursuing a superhero team to reeling against his sympathetic father (Garrett M. Brown), from giving up his costume to putting it on again (and then taking it off again, only to put it on once more). Likewise, Mindy’s stop-and-go-and-stop-again status as a superhero baffles. To identify a consistent narrative arc for either Dave or Mindy would be a small miracle. And then there’s Dave’s conflicting narration about how the world doesn’t need superheroes, it needs real people to do good and stand up for what they believe, at which point the film cuts back to Dave training, a new metal Kick-Ass helmet in the foreground—a conflicting sentiment to be sure. In the end, it’s all a bit too much. Wadlow doesn’t know what he’s trying to communicate with Kick-Ass 2, if anything, and the fleetingly enjoyable scenes suffer for the overall lack of cohesion. The film would have benefitted from some focus. Fortunately, there’s enough momentary humor and entertainment value here to provide a watchable, if disappointing sequel to the original.