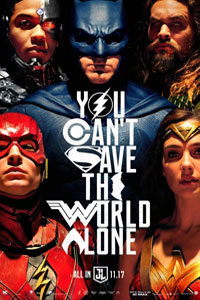 Diverting but not engrossing, expensive but cheap-looking, action-packed but not exciting, amusing but not funny, Justice League marks the culmination of Warner Bros.’ ever-expanding DC Extended Universe thus far. Beginning with Zack Snyder’s Man of Steel (2013), disappointment and indifference have marred the DCEU, which has tried and failed to replicate the electricity of its Marvel counterpart. After the lows of Batman v Superman: Dawn of Justice and Suicide Squad in 2016, the franchise recovered some with this year’s standout Wonder Woman—although, not even the feminist prowess of director Patty Jenkins’ breakout hit could restore the cumulative letdown of the other, decidedly underwhelming titles. Following the Marvel model, these earlier superhero films have been leading to a massive team crossover. Even so, Justice League hardly feels like the cinematic event that Joss Whedon’s The Avengers accomplished in 2012. The serviceable result marks a step in the right direction, while providing too little, too late to overcome the audience’s present state of superhero fatigue.

Warner Bros. has been developing a Justice League feature since 2007, and after an assortment of actors and directors (among them Jason Reitman and George Miller) had been attached and removed from the production, Snyder eventually took control of the DCEU, for better or worse. And while the early DCEU films demonstrate Snyder’s penchant for style over substance, his directorial presence feels largely absent here because, sadly, a tragic death in his family caused him to step down from the production last May. Though Snyder retains onscreen credit, he left much of the shoot and post-production to Joss Whedon, who abandoned the Marvel Universe after creative differences with the studio on Avengers: Age of Ultron (2015). As a result, Justice League‘s editing and visual palette have a clarity of purpose that proves rare among Snyder’s DCEU efforts (the shot-for-shot logic here remains clear). Far less dependent on slow-motion and various color saturations than Snyder, Whedon delivers a film that appears rather straightforward and devoid of empty visual stylizations. 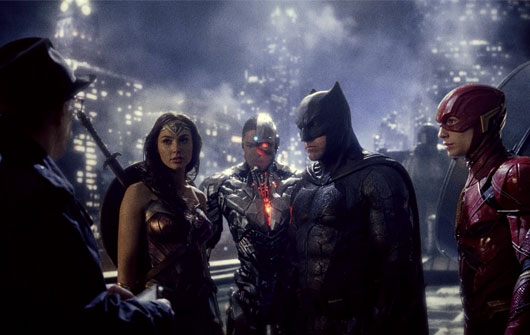 Fortunately, the film taps into today’s culture war, reflecting our divided state in a stroke of relevance. Justice League opens in a hopeless, out-of-control world wrought by Superman’s death (reminder: Superman died in Dawn of Justice). The rampant violence and unrest throughout the world are mentioned more than shown, except for an early shot during the opening credits where police arrest a skinhead harassing a Muslim woman—a clear sign that the filmmakers acknowledge the world-turned-upside-down quality of the Trump administration and how, now more than ever, people need heroes. Batman (Ben Affleck, solid) realizes that things are far worse than humanity can imagine: a force of fear-eating, bug-like aliens led by world-dominating baddie Steppenwolf have targeted Earth for their next takeover. Along with his trusty “guy in the chair” (to quote this year’s Spider-Man: Homecoming), Jeremy Irons’ dry butler Alfred, Batman assembles a team of heroes to defend the planet.

The best moments involve those getting-the-team-together scenes focused on the characters, their personalities, and their interrelationships, however thinly drawn. Justice League continues with Dawn of Justice‘s vague allusions to a romance between Bruce Wayne and the Amazonian Princess Diana (Gal Godot, a beacon of charm), who helps Batman gather super-troops for the forthcoming invasion. Wayne has no trouble convincing Barry Allen (Ezra Miller), aka The Flash, to join the team. A lightning-fast and ever-quipping comedy relief twentysomething (a character distractingly similar to Quicksilver from X-Men: Days of Future Past and Apocalypse), The Flash’s bulky costume looks silly and Miller, especially after his disturbing presence in We Need to Talk About Kevin (2011), seems ill-suited for the role—even though he provides a few moments of not-laugh-out-loud humor. Batman also attempts to recruit Aquaman (Jason Momoa), the undersea hillbilly of the group. Wonder Woman relates better to Cyborg (newcomer Ray Fisher), a young man whose father (Joe Morton) saved him from death by infusing his body with a cybernetic alien technology. Joining forces to save the world, the heroes quickly realize they need the late Superman’s help to defeat the film’s exceedingly dull supervillain, Steppenwolf.

When Snyder left the production, Whedon (who had previously tried to launch a Wonder Woman film, and now has plans to make a Batgirl feature for Warner Bros.) took over with script rewrites and uncredited directing duties. Whedon’s subsequent rewrites to the script required a reported $25 million in additional reshoots, more than double the average for the otherwise common reshoot process on a Hollywood blockbuster. Unfortunately, Henry Cavill, who plays Superman (yes, Superman lives, as if that comes as a shocker), had already grown contractually obligated facial hair for another production (Mission: Impossible 6). As a result, Cavill’s reshoot scenes were shot with the understanding that his facial hair would be digitally removed. Alas, the digital technology used to achieve this effect makes Cavill look artificial and Superman like a CGI creation. There’s always something not quite right about his appearance from the nose down—marking the performance with a voyage into the Uncanny Valley. A similar quality befalls Cyborg, a character comprised of mostly CGI animation, except for half of Fisher’s face. In any given scene, a number of the characters onscreen look distractingly weird and artificial. 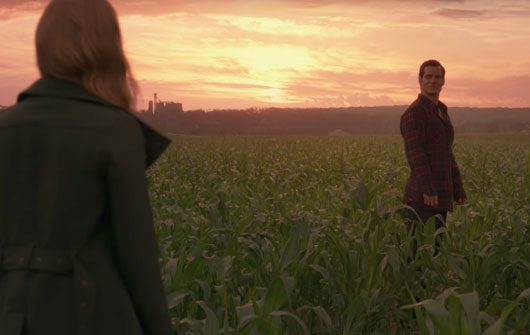 Still, Cavill and Fisher fare better than Ciarán Hinds, who provides the voice of Steppenwolf, a villain that looks like an engineer from Prometheus in goofy armor. Elsewhere, Justice League suffers from a debilitating case of third act boredom as the background devolves into a greenscreen concoction and our heroes become computer-animation creations. Once the sky turns red (for reasons never adequately explained), the characters appear in a computerized realm buzzing with Steppenwolf’s army of “Parademons”. The dynamics between the heroes never quite reach the levels of in-fighting and griping achieved among the Avengers, making everyone onscreen feel obligatory and modestly watchable. But because this is more than can be said for most DCEU efforts, Justice League seems better than it really is. After all, any superhero film whose best moments involve quiet, intimate scenes between Affleck and Gadot, or Cavill and Amy Adams (reprising her un-plucky Lois Lane), seems to be missing the need for satisfying spectacle. Chances are, you’ll leave the theater as I did, remarking to yourself, “It could have been worse.”

After two neat post-credits scenes and a few memorable moments along the way, Justice League was better than I had anticipated, though my expectations could not have been lower given Snyder’s track record with the material. Accompanied by a ridiculous, borderline offensive price tag of $300 million, the film at least avoids the bloat of most superhero fare, keeping the runtime at two hours. And even though it improves upon several entries in this particular cinematic universe, the experience wasn’t good or engaging, just merely serviceable—hardly enough to convince DCEU skeptics.

Nevertheless, Justice League’s shrug-worthy status remains something of a triumph for Warner Bros. and the iconic heroes of the DCEU, therein signaling the low condition of this franchise. Where the series may prove most fruitful are solo efforts for Batman and Wonder Woman that have the potential to delve into the characters more, but teams will remain troublesome, as will the film’s devotees to uninspired characters like Aquaman, Cyborg, and The Flash. As Dawn of Justice demonstrated, the studio behind this superhero universe has yet to master the cinematic crossover or distinguish many of its iconic characters, leaving Justice League to feel like a solid attempt—not quite a failure, but not really a disaster either.