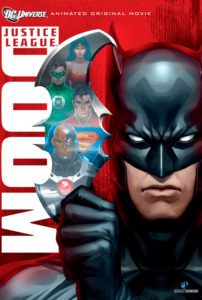 For devoted fans of Warner Premiere’s DC Universe animated films, Justice League: Doom instills a welcome feeling of nostalgia, albeit only for the brief twinkle that it appears onscreen. Original voice cast members from Warner’s assorted Batman and Superman and Justice League animated shows return to lend their talents for this epic storyline. Kevin Conroy’s iconic Batman, Tim Daly’s Superman, Susan Eisenberg’s Wonder Woman, Nathan Fillion fills his role originated in Green Lantern: Emerald Knights, and the rest can’t help but channel the best years of Justice League animation. In the last decade of Warner’s direct-to-video films (this makes their thirteenth release), the voices of these heroes have been altered here and there. Returning to the (majority of the) original cast was perhaps director Lauren Montgomery’s most genius stroke.

But once again, the film’s greatest downfall is its brevity. It clocks in at a short 72-minutes when the story itself warrants a two-hour feature to be sure. Based on the arc called “Tower of Babel” that ran in the comic JLA in 2000, this superhero yarn follows a nefarious villain named Vadal Savage whose hired super-villain lackeys break into the Batcomputer and steal the Dark Knight’s contingency plans to incapacitate the Justice League. Batman conceived each plan to take down a member of the Justice League should they ever go rogue, because that paranoid Batman always expects the worst in people, and usually with good reason. Throughout the course of the film, Superman, Wonder Woman, Martian Manhunter, Green Lantern, The Flash, and even Batman himself are thwarted one-by-one by their greatest weaknesses, which are often their strengths.

There’s lots of action to be enjoyed here, and for those who did not read the “Tower of Babel” arc (which I did not), it’s interesting to see how each hero’s weaknesses are exposed. Some are predictable, such as Superman being shot down with a Kryptonite bullet, whereas the plans imagined for The Flash and Green Lantern become surprising indeed. Of course, this all leads to the JLA miraculously recovering anyway and saving the day in a rousing head-to-head against Vandal Savage’s assembled Legion of Doom (including Mirror Mask, Bane, Star Sapphire, Metallo, Ma’alefa’ak, and Cheetah). The film’s best moments, however, are spent with the individual characters facing their potential demise, not the truncated finale.

But then this brings us back to Warner and DC’s biggest downfall with their PG-13 animated films: their usual 70-some minute runtimes. What’s most frustrating is that they want to make artistically credible storylines by imbuing a certain level of gravity into the proceedings, but they cut themselves short by leaving no time for character development. We see this more in their Justice League films than their respective one-hero stories like Batman: Under the Red Hood or Wonder Woman. And though these heroes are familiar and in some respect not entirely requiring additional character development, with each new DTV release the characters differ in slight ways. A new actor might voice a familiar character or the art direction may render the characters with different characteristics. For example, Superman appears less square-jawed in Doom; his appearance is almost boyish. Is it too much to ask for a little consistency?

These concerns have been voiced in my reviews of Warner-DC animated films before, and it’s becoming a tiring one even for me. Fans have called for longer runtimes since Warner began distributing these films, and I can only suspect that their profitability margin dramatically decreases if they assign additional budget costs to a longer product. What other reason could there be? Given this, Warner does the best they can with the time allotted here, although their one-character films will always be preferable to larger-scale Justice League entries where characters barely have enough screentime to feel significant. Written by the late Dwayne McDuffie, to whom this film is dedicated, Doom has just enough character development to engage the viewer, as a good two-part episode of the Justice League animated series would have. Anyone hoping for something more significant will have to keep waiting.