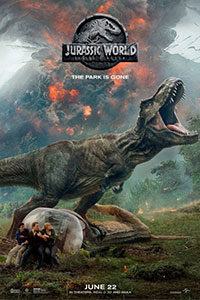 Michael Crichton’s original concept for Jurassic Park, first published in 1990, followed his familiar theme-park-gone-wrong scenario, first employed by the author and occasional film director in 1973’s Westworld. Genetically engineered dinosaurs intended as zoological attractions run amok on an island getaway meant for family fun, and in the process raise all sorts of questions about scientific ethics and our understanding of dinosaur evolution. Based on Crichton’s book, Steven Spielberg’s essential blockbuster from 1993 celebrated that breezy, funhouse atmosphere with smarter-than-average dialogue and characters running from convincing dinosaurs in an impending theme park. The two immediate sequels, trying to change things up, avoided the theme park locale and switched the action to a different dinosaur island for decidedly less engaging results. The Lost World: Jurassic Park (1997) proved an entirely meaningless experience, and possibly Spielberg’s worst film to boot. Jurassic Park III (2001) found Joe Johnston at the helm, delivering another anecdotal if diverting encounter between humankind and dinosaurs. And then, in 2015, the franchise returned to the original setup: Jurassic World placed viewers in the midst of an operational theme park, where thousands of guests were suddenly added to the menu for a host of superpredators. Over more than 20 years apart, Jurassic Park and Jurassic World proved Crichton’s original notion—a theme park that turns against vacationers makes for lively entertainment.

By that rationale, the Jurassic franchise doesn’t do well outside of the theme park model, as Jurassic World: Fallen Kingdom proves. Drawing heavily from the visual iconography of Spielberg’s first Jurassic Park and from the story of The Lost World, director Juan Antonio Bayona makes a diverting fifth entry in the series. Much like its central dinosaur, another Frankensteined genetic amalgam of carnivores called the Indoraptor, Fallen Kingdom‘s strain of nostalgia for the originals has been combined with a dash or two of new genetic material, which makes for an ungainly beast-of-a-film that shares identical plot points with The Lost World. Corporations and conservationist scramble to either exploit or protect the dinosaurs. Both parties arrive on dinosaur island to discover that, as it turns out, dinosaurs are dangerous. After narrowly escaping the island with their lives, our heroes discover the initial, good-natured corporate plans for the dinosaurs were nothing more than an appealing rouse; the real plans reek with an air of opportunism and greed, as the corporate interests return to the mainland with live specimens. Once on the mainland, the dinosaurs escape, of course, killing many, while the villainous, snooty executive becomes T-rex lunch. In this way, The Lost World is to Fallen Kingdom as Jurassic Park is to Jurassic World.

Except, Bayona’s film is far more imaginative and admirably out-there than Spielberg’s technically sound, albeit absolutely dull 1997 sequel. Rescuing the dinosaurs from Isla Nublar becomes urgent when the island’s dormant volcano erupts, threatening to render the dinosaurs extinct once more. Claire Dearing (Bryce Dallas Howard), the former theme park exec turned dino-activist, convinces her ex-boyfriend, doofy animal trainer Owen Grady (Chris Pratt), to join her on a mission to preserve several species by moving them off the lava-strewn island. They’re joined by “paleo-veterinarian” Zia (Daniella Pineda) and computer whiz Franklin (Justice Smith). Their escorts include a cadre of company stooges: a small army of mercenary-like goons headed by a big-game hunter (Ted Levine), who’s a far cry from Pete Postlethwaite’s corresponding character in The Lost World. Inevitably, Claire, Owen, and company learn the dinosaurs are destined for an auction to private bidders in a scheme concocted by Eli Mills (Rafe Spall), the duplicitous business manager of John Hammond’s former partner, the elderly Benjamin Lockwood (James Cromwell), who conveniently has never been mentioned until this film. Mills arranges for an elaborate auction at the expansive Lockwood estate, which is also home to the magnate’s snooping granddaughter Maisie (Isabella Sermon) and her caretaker (Geraldine Chaplin, who makes an appearance in every Bayona film, and distractingly disappears from this one). 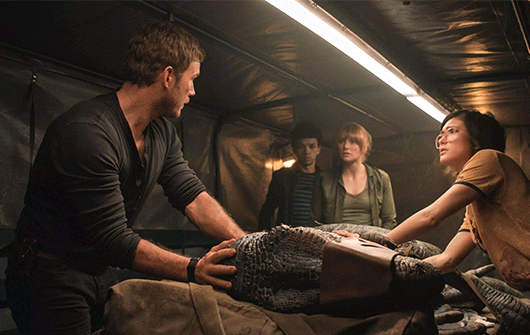 Dashing from a volcanic island to Lockwood’s mansion, the screenplay by Derek Connolly and Colin Trevorrow (director of Jurassic World) maintains high energy and suspense through the fear that living, breathing dinosaurs will remain captive or be exploited. Above all, there’s the streaked velociraptor named Blue, to whom Owen, and the audience, has developed a puppy-dog bond. To be sure, the writers break story continuity with Jurassic World, in which Blue was always about a second away from ripping out Owen’s throat, by injecting new scenes of Owen training Blue as a young velociraptor and showing their previously unimaginable mutual affection. Elsewhere, in an underdeveloped subplot, the screenplay drops hints about Maisie’s enigmatic origins, leading to a big reveal later in the film, the details of which prove inconsequential. Through everything, there’s the threat of the Indoraptor, a super-raptor pieced together from genetic bits of Jurassic World‘s fascinating Big Bad, called the Indominous-rex. The previous film’s genetic monster proved terrifying because the filmmakers established the dinosaur’s personality as a disturbed, antisocial creature raised in captivity and warped into a sociopathic killer, making the Indominous-rex scarier as a result. With the Indoraptor, Fallen Kingdom doesn’t bother developing the animal’s maligned psyche, and so it’s just another dinosaur. And while dinosaurs are scary enough, this franchise’s increasing need to amplify the dino-threat (from one T-rex to two, from T-rexes to the bigger Spinosaurus, from the Spinosaurus to the smarter Indominous-rex) has grown tired.

On a separate note, with politics saturating every corner of our culture at the moment, it’s no surprise that Fallen Kingdom, too, contains a political commentary. The message of the commentary isn’t the problem; it’s the lack of subtlety employed by Bayona and his screenwriters. Take Toby Jones, who appears in Trump-like fashion as a money-grubbing auctioneer, complete with white-capped teeth, orange skin, and mysterious comb-over. The auctioneer sells the most dangerous carnivores to a laundry list of countries who have dicey relationships with America. (Speaking of our tiny-handed leader, an early news ticker in the film reports that the U.S. president questions the “existence of dinosaurs in the first place,” which sounds about right.) Or, note the cameo appearance of Ian Malcolm, played once again by Jeff Goldblum, who appears in bookend scenes to remark about how corporate interests and “megalomaniacal politicians” ensure the furtherance of humanity’s rape of the natural world, leaving no question to whom he’s talking about. Since the start of the Trump presidency, political commentary has worked its way into many blockbuster films, ranging from Spielberg’s The Post to Marvel’s Black Panther, and Fallen Kingdom is no exception. But few major films have been so ham-fisted, even cartoonish with their open criticisms, which might not be so bad, except Michael Giacchino’s operatic score tries to elevate material that is content with functioning on the lowest possible level.

Often celebrated as an inspired visualist for his work on The Impossible (2012) and A Monster Calls (2016), Bayona relies on several, perhaps too many visual callbacks to previous Jurassic efforts. For instance, the director replicates a famous shot from Jurassic Park when a young girl cries while trying to pull shut a small door to protect herself from an oncoming raptor, with the action moved from a kitchen cabinet to a dumbwaiter here. Another scene features Owen licked by a dinosaur, paralleling a moment from The Lost World when a T-rex licked Julianne Moore. And about three times in Fallen Kingdom, Owen or others face down a bloodthirsty dinosaur until, at the last second, and recalling the climactic scene from the 1993 film, the T-rex arrives, seemingly out of nowhere, to chomp the threatening dinosaur, as if it has consciously saved the humans. Such blatant repetition and derivativeness aside, Bayona also conjures some memorable imagery, such as when a lone brachiosaur tries to follow a boat departing from the crumbling island but finds itself engulfed by volcanic smoke—a horrific and beautiful shot that may bring friends of animals, even CGI animals, to tears.

Bayona’s visual treatment of the material remains competent and watchable, even artful at times, regardless of its sources. It’s entirely possible for audiences to enjoy Jurassic World: Fallen Kingdom on purely popcorn-munching terms. That’s all some audiences need, and many in this critic’s auditorium left the theater declaring how much they loved the film. But after the refreshing return to form on Jurassic World, which once again embraced the origins of Crichton’s theme-park-gone-wrong setup, it’s disappointing to see the franchise devolve into another predictable rehash of established ideas that didn’t work the first time around. The likable and talented cast may be charming, and the impressive computer special FX may integrate live-action animatronics that result in convincing dinosaurs, but the script alternates between two equally unpleasant modes: either transparently unoriginal or just plain scattershot. Amid genetically engineered dinosaurs being weaponized for the military, the dull tongue-in-cheek political commentary, Giacchino’s overwrought score, and a familiar scenario, Jurassic World: Fallen Kingdom has a few primal thrills and bouts of humor, but a story structure that remains distractingly uninspired.