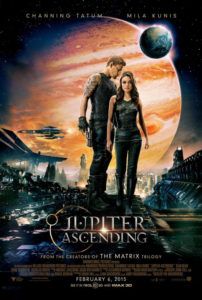 In Jupiter Ascending, Andy and Lana Wachowski steamroll through an inconceivably vast universe, as complicated as Frank Herbert’s Dune and much more so than Star Wars, with neither the runtime nor the inclination to fully explore it. This is not a fault of their $175 million-plus space opera; rather, it’s the film’s most admirable quality, and a rare one among blockbusters of this ilk. Typically, science-fiction stories about intergalactic systems of planets and civilizations suffer from what I will call “The Planet of the” syndrome. Space-travelers in Star Trek and similar fare always seem to land on a planet inhabited solely by one primary species, which in turn has one primary race. For example, in Star Wars mythology, there’s a Wookie planet inhabited by nothing more than furry, virtually identical Wookies; hence, it could be called “The Planet of the Wookies”. Jupiter Ascending is fresh because it considers a network of varied planetary systems so expansive that at any moment something random and new from any number of cultures (or subcultures) could appear onscreen, and without need or desire for adequate explanation.

Think about it. If there was life on, let’s say, 100 planets besides Earth, each with a diversity of cultures and species, how could any single film begin to explore even just one of these planets, much less the entire 100? And if we were suddenly thrust into a network consisting of 100 planets, or even just two or three, it might take a lifetime to learn how those unique cultures operate. (Most of us barely make time to understand the various unique cultures on this planet.) In that sense, the film recalls Guardians of the Galaxy in how it exposes the viewer to more visual information, more aliens, more neat sci-fi tech, and more ideas than a single film would typically offer—certainly more than some viewers can process in a single viewing. And so, beyond some obvious comparisons, Jupiter Ascending is very different than Star Wars in how the filmmakers refuse to pause and explain every gadget and character in a comparably straightforward galaxy. Instead, the Wachowskis deliver their mythology in fast jolts, as if the viewer could never possibly hope to understand it all, and so there’s little else we can do except hold on for the ride. Fortunately, the film also has its roots in Grimm fairy tales, which makes its basic conflict easy enough to grasp amid otherwise complicated sci-fi situations.

The story opens with voiceover from the resident Cinderella, Jupiter Jones (Mila Kunis), a lowly house cleaner who narrates about the obsession her late astronomer father (James D’arcy) had with the stars. Later on, of course, stars will play a significant role in Jupiter’s future. A twentysomething Russian immigrant living in Chicago, Jupiter is a one-dimensional protagonist restless in her life. But then one day a trio of bounty hunters from space tries to kill her. Enter Caine Wise (Channing Tatum, behind pointy ears and a “half-albino” goatee), a rugged soldier spliced together from a human and a wolf. Caine arrives on anti-gravity boots, with which he skates on the sky, just in time to save our heroine. Laser fights and high-flying shootouts ensue, and our eyes try to keep up. Caine calls Jupiter “your majesty” because she, we learn later, carries the genes of the former Queen of the Universe. According to some helpful exposition, when an identical gene pattern reappears after someone dies, this is considered reincarnation. The former Queen left her future reincarnated self a sizeable inheritance, which includes ownership of Earth, and so the film takes several opportunities to point out that Jupiter went from cleaning toilets to being the Chosen One of the cosmos and owner of Earth. 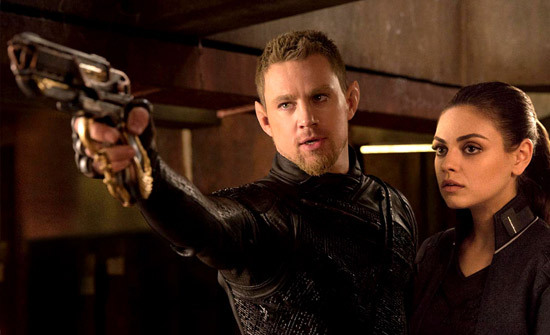 Turns out Earth is just one of the countless planets populated by humans, and furthermore it’s not the planet of origin for our species. An industry spanning galaxies produces human farming colonies to grow a population for harvesting. Once harvested, the human goodies are used to brew a youth elixir that the royal class uses to sustain their longevity for several millennia. Since she’s the reincarnated Queen, Jupiter is set to inherit the richest planet for harvesting: Earth. But the former Queen had three children, now known as the House of Abrasax, and all of them vie for their piece of their newly reincarnated mother’s fortune. The daughter Kalique (Tuppence Middleton) tries to play nice, but soon Jupiter is taken by one of two sons, Titus (Douglas Booth), who wants to marry Jupiter for her fortune—meaning, he wants to marry his reincarnated mother. Meanwhile, the slithering, Dracula-like brother, Balem (Eddie Redmayne), plots to kill our heroine from his elixir factory located inside the planet Jupiter’s stormy Great Red Spot. But Caine, his former legionnaire buddy Stinger (Sean Bean), and a clan of space cops plan to bring justice to Balem and his crooked siblings.

Kunis spends much of her screentime looking dreamy-eyed at Tatum, as her character quickly falls for Caine, who refuses to engage at first because he’s a lowly grunt and she’s royalty. But in another way, she’s the Lois Lane role here, constantly thrown about the screen and requiring her sky-skating Superman to rescue her. Though effective in a rom-com (like Ted) or a supporting role (like in Black Swan), she’s miscast as the central protagonist. Her character has also been under-developed by the Wachowskis (who have a habit of under-developing their characters). She’s rarely an active participant in her fate, and her personality is reduced to snarky reactions to what’s unfolding around her. Indeed, events in the film just happen to her, and like the audience, she’s nothing more than a passenger. But at the same time, the story moves so fast that the filmmakers don’t give the audience time to consider how dull Jupiter is. Swept away in the procession of laser-laden shootouts, spaceship battles, and the sheer size and awe of the production value, we hardly have time to think about anything. This is as the Wachowskis intended, and probably why the entire roster of characters are predictable, familiar types that audiences will understand despite the complicated milieu of assorted aliens (among which are typical gray aliens of Roswell-brand that are shown as gatherers capable of wiping away the memories of those who have seen them).

With so much going on, Jupiter Ascending wears its filmic influence like a badge of honor. Among many sources such as Dune and Soylent Green, the Wachowskis borrow most from Star Wars. After all, both films are about a humble nobody thrust into an intergalactic struggle and, alongside a roguish hero and an old general-type, faces off against a power-hungry madman whose HQ is an impenetrable fortress. The only element missing is two comic relief robots. Another significant influence on Jupiter Ascending is the graphic novel series Saga, by Brian K. Vaughan and illustrated by Fiona Staple. Much like this film, Saga is a space opera that jumps across an immeasurable universe populated by a wide array of species. Both refuse to establish or even follow their own rules (much to the delight of the reader/viewer). Other influences on the Wachowskis are contained within a single sequence or two. Consider when Jupiter has to claim her birthright, but to do so she must maneuver a neverending series of bureaucratic windows and clerks like something out of Brazil (there’s even mention of the dreaded 27B-6). The sequence ends when she finally receives the forms and stamps she needs, then must present them to Terry Gilliam, the director of Brazil, appearing in a cameo as a notary of sorts. 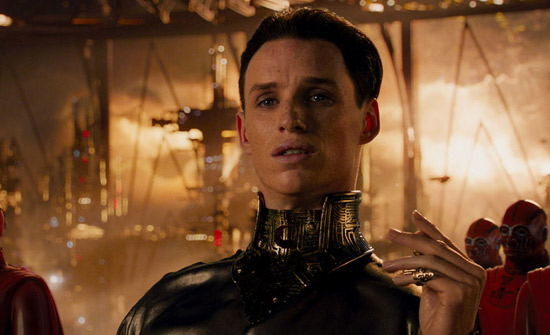 Courtesy of production designer Hugh Bateup and visual effects supervisor Dan Glass, some beautiful visuals accompany the presentation: a wedding ceremony where an audience of A.I. Artificial Intelligence-like robots watch a rose-petalled bride descend from on high; Balem emerging from an elixir bath to gaze upon the planet Jupiter out his window; a planet half-covered with red foliage observed from space; the unique look and design of the film’s characters, from a purple-haired hitwoman (Doona Bae, from Cloud Atlas) to a clan of dragonesque humanoids. But this production of lush costume and detailed sets is also a product of George Lucas’ Digital Age in the worst of ways. The Wachowskis write and edit for an audience programmed for videogames. Action scene shots last a mere second or two and are delivered with such a furious pace that, when combined with the fact that we’re sometimes unsure of who’s fighting who, can often result in confusion. The plot builds to a final “boss fight” that carries on for far too long. And maybe it was the CGI-ness of everything onscreen, or just the dramatic simplicity and therefore predictability of the protagonist’s conflict, but during the final act, I found myself tuning-out, my eyes glossing over, and my brain losing concentration.

Such downfalls aside, the film never lost my approval as another of the Wachowskis’  high-concept escapes, imbued with their common themes such as slavery and using humans as a product to satiate the ruling classes. Released by Warner Bros., the studio that has all but written the Wachowski siblings a blank check for their very ambitious projects after The Matrix and its sequels, Jupiter Ascending has received scathing critical reception, and audiences seem to feel the same way. To be sure, keeping track of every plot detail, every character, and their significance is a challenge, in part because the production has no intention of over-explaining the complexities of its filmic universe (although it often under-explains). Despite its familiar plotting and sometimes barely-addressed sci-fi surroundings, Jupiter Ascending manages to keep us involved, even at the most underdeveloped points in the film—and there are many of these. But as suggested in the first two paragraphs of this review, that’s the whole idea of the film. It’s a ride filled with pretty details and flashing lights, assembled with incredible vision by the Wachowskis. Even if, when compared to their masterful Cloud Atlas, this film seems like a step in the wrong direction; even if another 20-45 minutes of story and character development could have made the film far more satisfying; even if it sometimes loses you in its combination of complex detail and simple characters, the film’s ambition is just too considerable to dismiss.