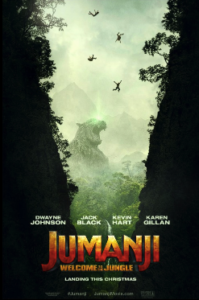 While film critics often complain that modern action movies have the structure of a video game, Jumanji: Welcome to the Jungle embraces those similarities, levels and all. A belated follow-up to the 1995 original, the sequel replaces the magical board game with a cursed console system and 16-bit rulebook. In the new format, every plot twist marks the next level in the game, characters are defined by player statistics, and participants have only three lives before it’s “Game Over.” Tired as these rules may seem, the video game logic is actually the most inventive and engaging part in a movie featuring the broad action-comedy stylings of Dwayne Johnson and Kevin Hart (stars of Central Intelligence, 2016). With only minor connective tissues to the first film, Sony’s soft reboot provides a mindless, expensive, PG-rated video-game-come-to-life.

The original Jumanji boasted a lively performance by the late Robin Williams, a before-she-was-famous Kirsten Dunst, and a jungle of animals (monkeys, crocodiles, rhinos, and a lion) animated by unexceptional CGI, even by 1990s standards. The sequel, shot for $90 million, appears to have spent most of its budget on the cast, including Johnson, Hart, Jack Black, and Karen Gillan. The digital animals and not-so-special FX look underwhelming, as though the last twenty years of leaps and bounds in computer technology had never happened, and most of the action involves our heroes facing anonymous goons on motorcycles. Given the generic quality of the spectacle, director Jake Kasdan proves that he’s more suited to comedies, like his expert musician biopic satire Walk Hard: The Dewey Cox Story (2007), than blockbuster-sized adventure.

The story, credited to four screenwriters, involves a modern-day Breakfast Club finding a Jumanji video game during detention. They find a vintage console in a storage room and decide to play, and when they do, they disappear into the game’s jungle world, instantly transformed into their chosen avatars. Conveniently, their game characters allow the teens to overcome their personal hangups. Spencer (Alex Wolff), the resident introvert and gamer, becomes the adventuresome Dr. Smolder Bravestone (Johnson).  The shy, bookish Martha (Morgan Turner) becomes the Lara Croft-esque Ruby Roundhouse (Gillan), who’s a badass “killer of men”. A jock nicknamed “The Fridge” (Ser’Darius Blain) shrinks down into “Mouse” Finbar (Hart), a whiny, short zoologist and “weapons valet”. And the self-obsessed popular girl, Bethany (Madison Iseman), becomes an overweight, middle-aged male cartographer named Professor Oberon (Black), who must adjust to being male.

This four-tiered body-switch setup spends most of the movie’s drawn-out, two-hour runtime on the juxtapositions between the characters’ real-life selves and their avatars. There are a few moments of humor in watching The Rock act nature-phobic and timid, just as plenty of laughs stem from Hart’s big personality in a small body, or Black behaving like a teenage prima donna. Gillan’s talent is wasted on using her physicality to dominate bad guys by “dance fighting” to Big Mountain’s cover of “Baby, I Love Your Way.” This brand of humor remains funny for about five minutes, and then gradually, achingly, the movie carries on the joke for another hour or so. Some tension arises when they realize that three tattooed bars have appeared on their wrists, representing their remaining lives in the game. When they “die” (and a beat later return by being dropped from the sky), a bar disappears. What happens when all the bars are gone? Meanwhile, there’s a plot, not that anyone is very concerned about it: Our heroes must return a glowing emerald to a jaguar statue to escape the game, while the nondescript villain, Van Pelt (Bobby Cannavale), wants the emerald to continue ruling Jumanji.

As part of the movie’s winking at the audience, Jumanji: Welcome to the Jungle follows its video game structure all-too-closely, resulting in a bland quality to the various levels of adventure (goons on motorcycles and CGI snakes, oh my!), and an embarrassingly uninvolving finale. Silly action set-pieces and a neverending streak of body humor mark the movie, which uses up its best gags by the end of the first act. A late appearance by Nick Jonas, in a weirdly margarita-centric performance, adds little to the experience. The main attraction here is the considerable mainstream star power of Johnson and Hart, who would make a dynamic duo, something akin to Arnold Schwarzenegger and Danny DeVito, if only they had the right material—and they have yet to find it (but keep looking, fellas). A slog that squanders its best ideas on cheap humor and a scenario so predictable that it stops being meta and goes right back to generic, Jumanji: Welcome to the Jungle is harmless family entertainment. But viewers and gamers alike may have more fun with Pitfall Harry.