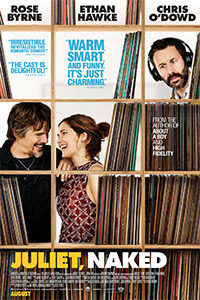 All through Juliet, Naked, one cannot help but admire the cozy wardrobe of its cast. Ethan Hawke plays Tucker Crowe, a reclusive former indie rocker, and he’s garbed in lazy weekend attire: faded graphic t-shirts, relaxed pants, and a speckled knit wool cardigan—the same outfit Tucker seems to have worn every day since his 1990s prime. Chris O’Dowd appears as Duncan, a cinema and media studies professor in Northern England who idolizes Tucker, and he’s dressed down in an array of snug sweaters, unstructured blazers, wrinkled button-down shirts, and unironed slacks that look perfect for a casual lecture on a rainy day. Rose Byrne stars as the sweet-hearted Annie, Duncan’s longtime girlfriend and a history museum manager who, in the film’s final moments, wears one of those oversized scarves that makes you want to drink coffee and watch the snow fall. Everyone looks delightfully comfortable, and that same quality is maintained by this easygoing romantic comedy, adapted from Nick Hornby’s 2009 novel.

Besides its ability to incite some online shopping, Juliet, Naked offers a pleasant, casual viewing experience, regardless of its rather screwball-worthy setup. But there are no pratfalls or zany antics here, just an air of romantic regret and an urgent feeling to make things right before it’s too late. The film centers on Annie, who feels stifled by her job at the Sandcliff Seaside Museum and unengaged in her 15-year relationship. Her boyfriend, Duncan (the Tucker Crowe zealot), devotes his personal time to a theory-spinning fan site. When a package addressed to Duncan arrives with Tucker’s rare demo album entitled “Juliet, Naked,” Annie listens to it first, and her opinion, sneeringly dismissed by Duncan, results in a spat. Her newly engrained resentment for her boyfriend’s idol worship leads to her scathing review on Duncan’s blog. In return, Duncan becomes distant, pouting that Annie doesn’t like everything he does to the same extreme degree.

Meanwhile, the withdrawn Tucker, a broke, recovering alcoholic living in Pennsylvania, barely able to keep track of his string of children with separate women, reaches out to Annie, moved by her accurate dismissal of his work. What proceeds for a time, then, is something similar to You’ve Got Mail, where Annie and Tucker exchange a series of honest, soul-baring emails that inevitably lead to their meeting in real-life. However, Tucker’s story allows the material to ripen in unexpected ways, in that rather than leading to his rockstar comeback as another movie would, he seeks to make up for lost time with his various children. Additionally, Juliet, Naked avoids merely allowing the romantic structure to progress in a predictable, Lubitsch-inspired turn of events, crowd-pleasing though it might have been. Annie and Tucker orbit around one another, sure of their romantic desires, but perhaps not so confident about their life choices to this point. Both of them have things they want and probably need to do before they settle down.

For the last few years, director Jesse Peretz has worked in television, helming a variety of sitcoms and dramas such as HBO’s Girls and Netflix’s Glow. After his agitated and unsubtle comedies The Ex and Our Idiot Brother, the small screen apparently taught Peretz some nuance. Or maybe it’s just the quality of Hornby’s writing. Juliet, Naked maintains that laidback tone characteristic of the author’s work, where his characters sit around and have natural conversations about their affinity for music while weighing their romantic situations. The screenplay, adapted by Evgenia Peretz (the director’s sister), Jim Taylor, and Tamara Jenkins, also offers an insightful look at the fervent internet fandom that spawns obsessive niche websites like the one Duncan operates, where the authors claim a strange ownership over the art they admire. This is familiar territory for Hornby, whose characters frequently involve music geeks (watch High Fidelity or About a Boy) who dominate their self-constructed world of opinions. (Note: I am not unaware of the irony that a non-professional online film critic is making this observation.)

Amiable and authentic, Juliet, Naked is also a subtly detailed production. The d.p., Remi Adefarasin, captures woodsy colors on Tucker’s farm and muted tones from the overcast skies in the U.K., adding to the comfy, earth-toned world of the film. Production designer Sarah Finlay decorates Duncan’s fan room in old posters, albums, and memorabilia of Tucker Crowe using vintage photos of a young Hawke circa 1995—this is impressive because none of it has the quality of bad Photoshopping that usually accompanies fictional album covers in movies. And it helps that Hawke is a musician of sorts, lending his Paul Westerberg voice to songs that Duncan overanalyzes and listens to again and again. Also, Hawke performs the Kinks’ “Waterloo Station” on an electric piano in a touching, sober moment. These sort of minor, albeit convincing bits do much to immerse the viewer in the overall effect of the story.

But the actors are the real showcase here. Bryne, carrying the same sad-sack quality she had in The Meddler, is endearing and sympathetic. Lily Brazier plays her less inhibited sister, a lesbian whose single trait is that she’s always on the prowl for a random hookup. O’Dowd, who has specialized in playing jerks as of late, uses his Irish brogue and boyish smile to somehow make Duncan not detestable. But the weathered-looking Hawke steals the film. He’s having a great year after First Reformed, arguably his finest performance, and his directorial effort Blaze, a biopic about musician Blaze Foley. Hawke is perfect for Tucker Crowe, as though his pretentious Gen X rebel from Reality Bites realized he was afraid of life, and only later, after two decades of self-destructive behavior, did he resolve to engage. Despite the characters’ sometimes heavy backstories, Juliet, Naked is a pleasant, often funny, and quietly charming indie alternative to the hyperactive comedies and overwrought romances usually distributed today.