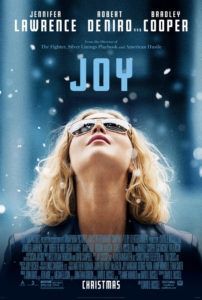 David O. Russell’s third film in a row to feature stars Jennifer Lawrence and Bradley Cooper, Joy heartily admires its subject, real-life entrepreneur Joy Mangano, inventor of the Miracle Mop and dozens of other home-shopping contraptions. Russell’s admiration results in Joy’s life turned into a straightforward success story about a self-made woman fighting against the odds to realize her dreams, whereas the film’s dreamlike qualities are underdeveloped. It’s worthy subject matter, to be sure, but the film loses a portion of its potential audience by representing the material as relatively grounded—as if he’s determined not to trivialize her important life story with his usual humor. And yet, this is a film with soap opera dream sequences that have a metaphorical place in its protagonist’s story. Russell’s screenplay, co-conceived with Annie Mumolo, hardly rings with the bells of whimsy and screwball comedy as his earlier work does. This may come as something of a disappointment to his devoted fans, but he nonetheless delivers a well-acted drama that stands as a testament to strong women.

Joy most resembles Russell’s earlier breakout hit, The Fighter (2010), about a boxer whose dysfunctional family holds him back from being the success he could be. In that film, Mark Wahlberg’s no-nonsense girlfriend played by Amy Adams helped get his career on track, while his crack-smoking brother (Christian Bale, in an Oscar-winning performance) helped train him. Here, Lawrence plays the titular character, a divorced mother of two who turned down college to manage her parents’ finances during their own divorce. Her mother Terry (Virginia Madsen) lives with her and does little else besides watch soap operas all day. Her ex-husband Tony (Edgar Ramirez) plans to live in her basement until his singing career takes off. Her hard-headed father Rudy (Robert De Niro) runs an unsuccessful garage and also needs to stay in her basement in the film’s first scenes.

This concoction of offbeat side characters seems to have the makings of another Russell-brand family like Silver Linings Playbook or Flirting with Disaster. And to some extent, that’s true. The director’s love of overlapping dialogue is present, while Linus Sandgren’s lensing never stops moving around the room. However, there’s an air of humor lacking around the family that doesn’t have the same dynamic as Russell’s earlier films, which is not to suggest he’s required to make films with a comic element. After all, this is a story about a woman becoming a self-made mogul; injecting humor in the story might be interpreted as disrespectful somehow. But there are other elements of the story that lend an ungainly fantastical quality to the production, such as elaborate dream sequences and the film’s narrator, Joy’s grandmother (Diane Ladd), offering her omnipotent insight from beyond the grave despite being a peripheral character at best when she’s alive.

Joy’s chaotic life beats down on her at every turn, until a dream inspires her to finally take a chance and create something. The character has long been an imaginative sort with talented hands, so she puts those hands to use constructing a new mop. She borrows money from her father’s eccentric Italian girlfriend (Isabella Rossellini) and takes some bad business advice too. She contends with her family’s unrelenting narcissism, particularly from her half-sister Peggy (Elisabeth Rohm). And when selling her mops in a K-Mart parking lot doesn’t cut it, she gets a second chance with Neil Walker (Cooper), who made QVC a national brand. Throughout the film, a flurry of bad luck beats down on Joy, and it’s Lawrence’s fiery spirit that best shows the character standing up to those who don’t believe in her, those who don’t support her, and those who try to scam her.

But a film with four credited editors (Jay Cassidy, Alan Baumgarten, Christopher Tellefsen, Tom Cross) doesn’t support a case that the filmmaker had a clear vision for the end result. Indeed, the trailers for Joy play on the film’s all-too-brief dream sequences and hints of criminal activity (there are many shots and talk of guns in the ads, along with the suggestion of crime, perhaps trying to superficially link the film to Russell’s last picture, American Hustle). Then again, Russell has no control over how Joy was marketed; but the trailers speak to how the footage could be molded based on what was shot. Tonally, the film proves somewhat confusing and unbalanced, but not in the expert way the director’s films often are. Russell usually seems at his best when he’s trying to make sense out of a frenzied situation. Each of his films could be interpreted that way, going all the way back to his 1994 debut, Spanking the Monkey. But the film doesn’t come together the way it should.

Nevertheless, there’s much to admire about Joy, beginning with another helluva performance by Lawrence, who brings an earthy emotional realism to the character. Around her, the actress is supported by castmembers chewing on their roles, savoring every juicy line and potential moment of eccentricity. De Niro, Rossellini, and Madsen at times seem like two-dimensional caricatures, but they’re each clearly having fun in their roles and have surprising emotional revelations. Cooper doesn’t do much but stand around with his beard and smile, but the pairing of he and Lawrence is much more satisfying than their turn together in this year’s flop Serena. Ladd’s all-seeing grandmother presence feels underdeveloped. Overall, Russell’s high regard for Joy may have prevented him from making a more dynamic film, and the filmmaker never quite overcomes the push-and-pull of his respect for the material and his drive to tell stories in the manner to which he’s accustomed.