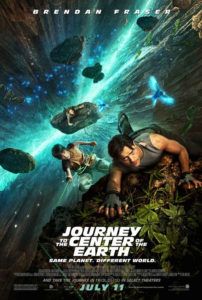 Movies like Journey to the Center of the Earth are mildly offensive from a viewer’s standpoint, because they don’t bother pretending to be more than popcorn-munching idiocy. Forget plot or subtext or character development, the experience relies on special effects purveyed by the hopeless contrivance of 3D for its wows. There’s nothing wrong with escapism, mind you. But there is, however, a statute of limitations for brainless entertainment, not to mention the inanity I can abide from Hollywood.

Of course, the film is based on Jules Verne’s classic novel, wherein, another world, complete with all sorts of unimaginable dangers, is discovered at the earth’s core. In this adaptation (there have been many), geological professor Trevor Anderson (former Encino Man Brendan Fraser) stumbles upon the world-within-a-world when notes scribbled in his dead brother’s copy of Verne’s book suggest the location of a “volcanic tube” in Iceland, possibly leading to said underground environment. But Proffessor Trevor is busy watching his teenage nephew, Sean (Josh Hutcherson), who might benefit from an adventure with his estranged uncle if it means better understanding his father’s pursuits.

Anyway, they wind up with an Icelandic “hottie” named Hannah (Anita Briem) for a mountain guide, but she’s little help when they find themselves trapped in an abandoned mine, complete with a roller-coaster railcar ride straight from Indiana Jones and the Temple of Doom. Eventually, they inadvertently fall “thousands of miles” down into the earth, landing safely somehow inside an unfathomably large air pocket where a fantastical world exists. Nearby gasses burn bright and conveniently illuminate the location, which teems with glow-in-the-dark birds, man-eating plants, and whole schools of Loch Ness monsters.

Also running amuck in the underground world is a lone Tyrannosaurus Rex, who has apparently eaten all other dinosaurs in the area (the skulls of his fellow T-Rexes cover the surface of his desolate terrain). What does he do all day, all alone? He’s probably bored and lonely, until three dim-witted humans fall from above into his cavernous domicile. He does everything he can to chase his human prey and secure himself a hearty lunch (provided by Fraser’s bulging muscles—who knew science professors were so buff!), but alas, they outwit him and no meal is had. End of subplot.

And now my inevitable complaints about the film’s 3D effects, shot in the inaccurately-titled “Real D”… Since only about a third of the theaters carrying the film sport the projectors required to create 3D images, chances are you’ll see the picture in lousy old 2D—the same dimension as stinkers like Citizen Kane and Seven Samurai, no less. Most theaters nowadays aren’t upgrading their projectors because the gimmick of an additional “dimension” remains historically unsuccessful and often artistically stupid.

I’ve already voiced my thoughts about 3D, so my disdain for this film should come as no surprise. Objects fly pointlessly toward the audience, doing nothing to improve the story, rather distract from it. Take, for example, scenes in the opening, where director Eric Brevig forces us to endure silly assertions of the device: Prof. Trevor spits mouthwash into the sink where Brevig has positioned his camera, and voila—3D spit! In another scene, Prof. Trevor teaches Sean how to use a yo-yo, which jets toward the audience. (Note: Pathetically, this same yo-yo trick was used more than 20 years ago, back when yo-yos were popular, in Friday the 13th Part 3, another 3D abomination.)

Audiences shouldn’t be made to feel stupid when sitting in the dark and enjoying (or not) a movie, but that’s just how we feel, enduring uncomfortable eyewear that dims the screen into a murky image. And those hokey scenes like the ones mentioned above actually make it worse for audiences in theaters with non-3D projectors, as they’re blatantly forced, even laugh-inducing (instead of just pathetic) without the accompanying effect.

The movie fails on one level by embracing 3D to the extent of formulating scene after scene around the effect. On another level entirely, Journey to the Center of the Earth makes a mess of Verne’s text, losing every sense of imagination and wonder the writer is famous for. Even worse than the paper-thin characters, the CGI-created world is done so with sub-par animation unworthy of a made-for-TV movie. We’re never in awe of what we see. And considering this science-fiction yarn comes from the writer of staples like 20,000 Leagues Under the Sea, For the Flag, and The Mysterious Island, the attempt is sad.