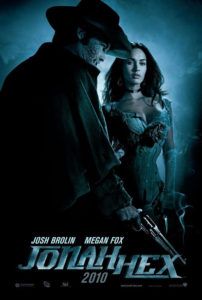 Whenever a movie is being made, someone should love that movie. It should be someone’s passion project. Someone—the director, writer, actors, producer, etc.—should put every fiber of their creative self into the project. And whether the movie proves a masterpiece or an abysmal failure, the effort of this someone should manifest onscreen. The audience should be able to sense an enthusiasm about the project that, at the very least, suggests that the result was a work of someone’s passion, even if it’s a misguided dud. Watching Jonah Hex, it becomes painfully apparent that such a someone didn’t exist on this production.

Based on the long-running but little commercially known DC Comic, this cartoonish Western follows Confederate Army turncoat-cum-bounty hunter Jonah Hex (Josh Brolin) on his quest for revenge. At the end of the Civil War, Hex turned his back on the South after his commanding officer, General Quentin Turnbull (John Malkovich), became cruel in his treatment of innocent civilians from the North. And so Turnbull retaliated by killing Hex’s family and branding the man’s face, leaving him for dead. When he’s brought back from the beyond by a band of Native Americans, Hex can suddenly talk to dead people, but it’s any wonder they can understand what he’s saying through those gritted teeth of his. Hex’s scarred face has a cheek hole and a thin string of tissue connecting his upper and lower lips; as his mouth awkwardly restricted, he’s forced to grunt his toughguy dialogue with an indecipherable burr.

Hex, who’s wanted by the authorities for his anti-hero lawlessness, pairs up with your typical hooker-with-a-heart-of-gold, Lilah (Megan Fox),  to work for President Grant (Aidan Quinn), who dramatically (and laughably) asserts, “The future of our county may very well rest in [Hex’s] hands!” You see, Turnbull has built a super-secret weapon (not unlike the absurd giant mechanical spider from Wild Wild West), which the government designed but decided not to finish because it was too dangerous. But somehow Turnbull has assembled the parts from the scrapped plans of a super-cannon, which shoots super-cannonballs and detonates them on command with golden glowing orbs, the origins of which the movie didn’t feel the need to mention. If this doesn’t make sense to you, don’t worry, it didn’t make much sense in the movie either.

This all leads to a climax that merges together four sequences at once. When Hex infiltrates Turnbull’s floating ironclad fortress, the movie overestimates its audience’s patience by editing together a fight between Hex and Turnbull, a fight between Lilah and goons, a flashback to Hex’s past, and a second, imaginary fight between Hex and Turnbull (apparently going on in Hex’s mind). The cuts between these events are nonsensical and messy, but their muddled presentation doesn’t compare to the audience’s lack of concern by this point. The movie seems to have tried, and succeeded, in sending the audience into a collective indifference. But more than just being uninvolving, the movie’s squandered possibility of a potentially enjoyable franchise and utter waste of an otherwise solid cast demands your irritation.

Brolin, playing the near-invincible Hex, mumbles his lines through a shoddy-looking prosthetic mouthpiece that restricts his jaw and lip movement. (Note to filmmakers: When your lead actor can’t speak, it’s time to rethink your practical makeup effects.) As a result, Brolin, who can’t seem to shut his mouth, can’t quite pronounce his ‘Bs’ and ‘Ps’, and he always seems on the verge of drooling. Opposite Brolin, Fox plays her usual lusty-voiced, pouty-lipped self, proving once again that she was hired for her overvalued looks and not for her acting talents. And despite playing a Confederate General, Malkovich doesn’t bother attempting a Southern accent, as though he doesn’t even want to try. Each performance is lazier than the last.

But there’s also an impressive supporting cast to consider. Oscar-nominee Michael Shannon (Revolutionary Road) appears in a blur as an underground cage match announcer; his role was so brief, it had to be confirmed in the credits. Continuing his streak of bizarro, crazy-eyed performances, Wes Bentley (P2) plays Turnbull’s secret benefactor with a baffling accent that could’ve been Southern or British—there’s no way to be sure. Jeffrey Dean Morgan (The Losers) appears as a corpse. Comedian Will Arnett (TV’s Arrested Development) has a small role as a straight-arrow army Lieutenant. But the most tragic of them is the appearance of Michael Fassbender (Hunger, Inglourious Basterds) as Turnbull’s Irish lackey Burke. Fassbender, arguably the most talented and diverse actor in the cast, tries to make his jump into mainstream Hollywood movies here, but instead wastes his talent on a goon role.

Upon seeing these familiar faces throughout the movie, one can’t help but wonder what any of them saw in the project. Writers Mark Neveldine and Brian Taylor, the anti-geniuses behind Gamer and Crank 1 and Crank: High Voltage, lend their usual brand of ultra-violent, character-less storytelling to the script as it appears onscreen. The movie jumps around from setpiece to setpiece, none of them visually interesting or propelling the story in any important way. The one-dimensional characters speak cliché dialogue worthy of eye-rolls, while illogical nonsense unfolds with only the slightest purpose behind it. It’s probable that everyone attached signed-on at the mere idea of a Jonah Hex movie, because they were sold on the concept as a moneymaking comic book movie. Believing this is important, because the alternative, that these actors agreed to this disaster after reading a script, proves too frightening to accept.

Director Jimmy Hayward’s inexperience during the filming inspired the executives at Warner Bros. to hire director Francis Lawrence (I Am Legend) to complete extensive reshoots that were (supposed to) spruce-up the humdrum action scenes (but didn’t). If only Lawrence had enlivened the sleepy performances or congealed the story, Jonah Hex might at least be watchable. Whether the end product can be attributed to Hayward or Lawrence, the inert outcome plays like confused drivel without purpose. From the animated (second) prologue to the choppy editing that laughs in the face of all things linear, it’s clear there was more material for this 80-minute movie, and that it probably didn’t work, and so it ended up on the cutting room floor.

No one involved seemed to grasp the movie’s tone (straight-up action, comic book action, or action-comedy), so the audience will constantly ask themselves how they’re supposed to react. Brolin goes one way, Malkovich goes another, and the director(s) can’t keep control over the diverging shifts in both the performances and the script. Much of this can be attributed to Neveldine and Taylor, who in their movies frequently replace good storytelling with random ideas that are only half-developed. Jonah Hex, like Batman & Robin and the 1998 version of The Avengers before it, finds Hollywood carelessly slapping together elements of a bankable property and failing in every respect, to degrees that go beyond just bad filmmaking and instead reach to extremes of moviegoer abuse.