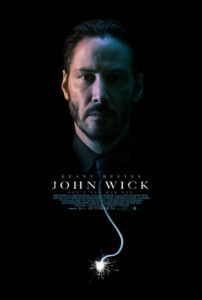 Action movies are rarely so confident in their action as John Wick. First-time filmmaking team David Leitch and Chad Stahelski (the former receives a producer credit, the latter a director credit, but they did both together) have served as stuntmen and action coordinators since the early 1990s, working on everything from Point Break to Fight Club to The Matrix. If you can think of a big, impressive actioner in the last twenty years, chances are Leitch and Stahelski have overseen the stunts or even carried out second unit director duties. They’ve been around some talented directors and stood-in for John Wick‘s star, Keanu Reeves, and they’ve put that experience to expert use here. For all of its familiar plot elements, the movie knows when to step back, let Keanu do his thing, and watch the impressive fight and gunplay choreography throughout.

R-rated action movies, once popular in the 1980s and the following decade, have become a rarity today, at least in terms of finding a satisfying, well-made one. John Wick is exceptional because the script by Derek Kolstad knows what it is and doesn’t want to be anything more than a kick-ass action movie, plain and simple. Leitch and Stahelski have the same objectives—they keep the momentum going and reign in their editor Elísabet Ronaldsdóttir from chopping the action to bits. Their cinematographer Jonathan Sela adds plenty of heavy saturations to give gloomy scenes a muted look and action scenes plenty of bright club colors, but he also captured the action from a distance to give the movie’s many one-on-one fight sequences glorious clarity. Most of today’s action directors prefer tight framing, choppy cutting, and shaky-cam action, all of which are refreshingly absent here. (But if there’s one underwhelming quality to the production, it must be the corny rock music score by Tyler Bates and Joel J. Richard.)

The simplicity of the plot might seem like a weak spot, but it’s a strength that allows us to savor the expertly choreographed action. Reeves plays the titular character, a former mob assassin who retired after meeting his wife, Helen (Bridget Moynahan, seen only in flashbacks). When the story begins, John’s wife has died of a long-suffering illness and he’s left alone to grieve. After her funeral, his doorbell rings and he receives a posthumous delivery from Helen—just about the cutest Beagle puppy you’ll ever see, which she wants John to raise to help him move on in her absence. But when a group of Russian thugs, led by Iosef (Alfie Allen), break into John’s house to steal his cherished 1969 Mustang and issue a beating, they kill the puppy. If ever there was a reason to exact unrelenting bloody vengeance on a bunch of gangsters, this is it.

Coming out of retirement to unleash hell on Iosef and his associates, John gathers an arsenal and reenters his former underworld of hired guns and sophisticated criminals, all of whom follow a strict protocol in their business. Exclusive gold coins pass between John and the concierge (Lance Reddick) at a hitman hotel (where guests are prohibited from discussing “business” or they face dire consequences), or to a cleanup crew that arrives to dispose of bodies when a “dinner reservation” is made. It’s a fascinating little underworld, and one of the most powerful players is Iosef’s father, John’s former employer Viggo Tarasov (Michael Nyqvist). Viggo knows stopping John’s revenge mission won’t be easy, and so he puts a contract out on our anti-hero, hiring Willem Dafoe’s friend-or-foe sniper and Adrianne Palicki’s ruthless killer. (Compare John Wick‘s collection of Russian gangsters and hitmen to the bland characters in the recent Denzel Washington vehicle The Equalizer, and you’ll realize why this movie’s skilled treatment is so refreshing.) Viggo also sends a small army of thugs, but John makes short work of them.

The plot proceeds as you might expect, with John hunting down Iosef and killing everyone in his path. But John Wick is excellent for the degree of style and graceful precision injected into the action scenes. Reeves hasn’t put his presence to such good use since The Matrix. His sharp, fast movements as he shoots his way through a half-dozen or more goons is engrossing, his almost robotic-yet-poised movements calculated, while his cool temperament serves the character well. There’s even a scene where he’s tied up and pouring his enraged heart out, and we stop to think, Wow, Keanu can act! Some of the dialogue proves dim, but Reeves’ character doesn’t say much anyway, leaving us to watch the impressive display of keen visual stylization and brutal violence unfold before our eyes. Though John Wick may adhere closely to the long-established formulas of the revenge actioner, it’s a satisfyingly familiar concoction, reminding us how the same old stories aren’t timeworn if they’re made with care.