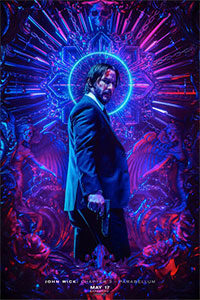 Drenched in rain and accented by neon, John Wick: Chapter 3 – Parabellum continues the saga of Keanu Reeves’ latest and arguably best screen persona, following Johnny Utah, Jack Traven, Johnny Neumonic, John Constantine, and Neo. After the puppy left to him by his late wife in the 2014 original was killed, retired hitman John Wick launched a relentless battle against a league of assassins that operates in an ever-expanding underworld (in which even Jason Mantzoukas is a deadly force). What’s so special about John Wick and John Wick: Chapter 2 (2017) are the action scenes that follow Reeves through countless armed thugs, delivering a copious number of brutal headshots in sequences that are filmed with precision and clarity to spare. Add to this Reeves’ deadpan humor, the effective world-building, and stylish aesthetic, and the franchise has proven better than most of this ilk. Parabellum features some of the newly formed trilogy’s best action sequences; however, the story’s lack of motivation, beyond Wick’s desire for self-preservation, leaves the material wanting. There’s less time spent with Wick and his tragic motivations, and more time spent testing the hero’s abilities with new weaponry (knives, books, even horses).

Picking up where Chapter 2 left off, Parabellum opens with Wick being designated “excommunicado” by the High Table, which places a $14 million bounty on his head and puts dollar signs into the eyes of killers everywhere. Wick attempts to escape by calling in a few favors, but he finds his indebted colleagues reluctant to help, fearing the High Table’s wrath. Luckily, Wick has a blood oath with his Russian mentor (Anjelica Huston), who transports him to Casablanca, where he will try to locate the High Table’s overseer. At the same time, the High Table sends an Adjudicator (Asia Kate Dillon) to settle scores with The Continental, the New York syndicate hotel managed by Winston (Ian McShane) and concierged by Charon (Lance Reddick). Winston broke the rules when he helped Wick in the last movie, and the snooty Adjudicator gives him a week to get his things in order.

Structured like a video game with ascending levels of difficulty, the movie follows Wick from one group of bad guys to the next, each indistinguishable from one another—aside from the way Wick uses his surroundings to kill them. It opens with a library level, requiring Wick to weaponize hardback volumes of ancient literature against a seven-foot foe. There’s the stable level, where Wick twice uses a horse’s kicking reflex as a deadly weapon against armed goons. There’s the Casablanca level in which our hero teams with Sofia (Halle Berry), whose two dogs have been trained for mid-air attacks and extended groin biting. Another level is an elaborate shoot-em-up inside The Continental, where Wick takes on armored thugs against whom Wick’s headshots are ineffective until he acquires an armor-piercing shotgun. But the action is never better than a tense knife-throwing fight in a weapon museum during the first half-hour.

Meanwhile, the screenplay, credited to a whopping four writers, engages in cheesy dialogue that seems to wink at and demystify the self-serious, almost mythical world established in the first two. It gets worse late in the movie with the introduction of the Big Bad named Zero, a silly character played by Martin Dacascos, better known as The Chairman from The Food Network’s Iron Chef America—leaving the viewer with the suspicion that Zero will announce “Allez cuisine!” at any moment. Zero idolizes Wick, and Dacascos’ hammy performance only exaggerates his absurdly strained lines like, “You and me… we’re the same.” His adoration for his enemy, however, extends into comic territory, such as when Zero sits awkwardly close to Wick on a couch or carries on about how much he admires the man. From snooty finger-wags to corny last lines, Zero, and Dacascos’ performance, bring down the entire movie. (He’s a significant step-down from Common, Wick’s opponent in Chapter 2.)

The writers also make matters unnecessarily complicated, taking Wick on a journey to find the High Table’s leader (Saïd Taghmaoui) in a desert interlude that ultimately proves pointless. In an uncharacteristic move, Wick agrees to submit to the organization’s will, a choice that, five minutes later, he reverses in favor of all-out war (after all, parabellum is Latin for “prepare for war”). The subplot extends the material an extra twenty minutes or more, just enough to make the movie feel unnecessarily long. The action scenes, too, begin to drag in the finale, though not because they were made without incredible skill or impressive stunts. Rather, it has more to do with the viewer’s exhaustion (the runtime is over two hours), and how everything that happens in the movie feels somewhat unnecessary to Wick—existing merely as a setup for the inevitable Chapter 4.

Fortunately, most of Parabellum consists of action scenes that are compellingly shot by cinematographer Dan Laustsen and cohesively edited by Evan Schiff. The movements in hand-to-hand combat are fast and tense, and the sense of space is rendered with impressive clarity throughout. As ever, the action scenes in this series keep the viewer invested, whereas our interest in the ever-expanding mythology and personal motivations of Wick have thinned over two sequels. As the franchise becomes increasingly cartoonish and over-the-top, it’s also becoming kitschier, which cheapens the sheer coolness with which this newly formed trilogy began. Action junkies and Reeves fans may find it easier to forgive the movie’s story faults, but those looking for a modicum of substance behind their action may be left feeling somewhat indifferent toward the experience.