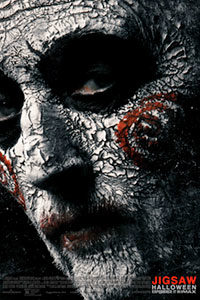 Just seven years ago, Saw 3D, the seventh entry in the gruesome horror franchise, promised to be “the final chapter.” If you believe that, then you don’t understand how horror movies work. Every Saw title, released year after year since the original debuted in 2004, earned several times its budget, making the horror franchise one of the most profitable in history. Despite the usual diminishing returns, the 2010 release earned a hearty sum too. So why conclude the series? Why not continue to churn out sequel after sequel until the end of time? Undoubtedly, viewership fatigue played a role, possibly even creative fatigue. After all, how many killer machine scenarios can one franchise muster? In any case, Hollywood couldn’t just walk away. It was only a matter of time until Jigsaw, the eighth, and certainly not the last, movie in this series.

Long-running horror franchises rely on hype. Much to the delight of their promotional campaigns, Jason Voorhees and Freddy Kruger kept dying and coming back with titles like “The Final Chapter” and “New Nightmare.” Whether they’re resurrected or rebooted, they always come back. The same is true of the Jigsaw Killer, played by the gruff-voiced Tobin Bell, the moralizing trickster with an affinity for creepy dolls and Rube Goldberg machines. He died, was resurrected, and inspired half a dozen copycats throughout seven movies. Meanwhile, the distributors at Lionsgate wore down audiences with their “If It’s Halloween, It Must Be Saw” campaign. Every year around Halloween came another entry (and a charitable blood drive). But there was nothing special about these releases. Each was just another obligatory sequel with the usual helping of so-called “torture porn” and convoluted, twist-heavy plotting.

Jigsaw seemed like it might be different, if only because filmmakers Michael and Peter Spierig agreed to direct. The brothers behind the inventive vampire thriller Daybreakers (2009) and the time-travel mindbender Predestination (2014), the Spierigs have an assured visual sense and a unique perspective on tired subgenres. Unfortunately, the brothers did not bring their talents as writers to the movie. The screenplay for Jigsaw was penned by Pete Goldfinger and Josh Stolberg, whose credits include Good Luck Chuck (2007), Sorority Row (2009), and Piranha 3D (2010)—not exactly the classiest or well-written bunch of movies. Goldfinger and Stolberg don’t bother trying to reinvent the franchise or reimagine its possibilities; instead, the movie feels like another unexceptional entry, as though the seven-year gap since Saw 3D never happened.

In true Saw fashion, the story consists of detestable characters being punished by cruel traps, while hapless detectives try to prevent more victims from being torn apart, albeit unsuccessfully. Somewhere in a barn, five people awake to find chains around their necks and buckets on their heads. A recorded voice, none other than the ultra-hypocritical Jigsaw (aka John Kramer), tells them that they will be set free if they acknowledge and atone for their past wrongdoings. But, of course, atonement requires being subjected to a gory test of wills. As Detectives Halloran (Callum Keith Rennie) and Hunt (Clé Bennett) try to track down these latest victims, they find evidence suggesting Kramer may still be alive. But wait, does that mean Jigsaw didn’t die as previously indicated in Saw III? Has he fooled everyone for four movies? Could Jigsaw be working with the shifty forensic pathologist Logan (Matt Passmore) or his assistant, Eleanor (Hannah Emily Anderson), an obsessed Jigsaw fan? Unfortunately, the answers to these questions are neither revelatory nor clever, nor even particularly interesting.

To be honest, after Saw 3D, I vowed not to return to the Saw franchise. The inclusion of the Spierig brothers changed my mind. But whatever control the Spierigs maintained over their earlier productions must have drastically influenced their end products for the better. Under Lionsgate and the franchise’s usual producers, the directors seem to have been forced into delivering a choppily edited mess of overplotted nonsense—a typical Saw movie. As a result, Jigsaw did not perform as well as its predecessors at the box office, meaning Lionsgate might think twice before releasing another typical sequel. What this series needed was not more of the same, but an entirely new vision to replace the tired model. The Spierigs could have provided that if they had written as well as directed the sequel. Instead, gorehounds will get their fill, and that’s about the limit of Jigsaw‘s appeal.